Borges and the Eternal Orangutans

If you're a person who enjoys reading Jorge Luis Borges, Edgar Allan Poe, and H.P. Lovecraft, then Brazilian writer Luis Fernando Verissimo's novel Borges and the Eternal Orangutans will be candy for you.  I know it is for me, a reason why, last week, I picked it up off my shelf for a re-read. 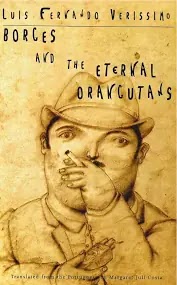 It is 1985.  Our narrator, an obscure Brazilian academic and Borges admirer named Vogelstein — he left Nazi Germany as a baby with two aunts — attends the yearly Israfel convention in Buenos Aires, a gathering of Poe scholars, of which Vogelstein is one. As is common knowledge, or should be, nothing is as cutthroat and competition-filled as academia, and to this convention come three men who hate each other, the German (who lives in Mexico) Joachim Rotkopf, the American Oliver Johnson, and the Argentinian Xavier Urquiza.  All three have specific cultural biases and their own obsessive theories about Poe and Lovecraft's work that have led them to insult each other at past conferences and in the pages of the literary journal they all contribute to, called The Gold-Bug.  Prior to the gathering, Rotkopf has announced that he has come prepared to unmask the "Argentinian, Xavier Urquiza, to ruin his reputation and demolish him intellectually, at the same time pulverizing the American, Oliver Johnson, whom he called 'Lovecrafty', with documentary proof that his theory on the Necronomicon was not only utter nonsense, but plagiarised to boot."  Borges is at the conference as well, merely to mingle and take in the discussions when they get going, but on the very first night, after the opening cocktail party, Urquiza is murdered in his hotel room.  He is stabbed in the throat but not before he manages to drag himself over to the room's large mirror and position his body in such a way that it resembles a V, a dying man's clue to who killed him.  Or is the letter he meant to create an X...or an O...or a W?  Vogelstein, Borges, and their mutual friend Cuervo, yet another Poe specialist, try to figure it all out, discussing the crime in Borges' home in Buenos Aires, and the matter is all the more complicated because, of course, in the tradition of Poe, who wrote the first locked-room murder mystery with "Murders in the Rue Morgue", Rotkopf has been found dead in a room locked in all ways from the inside.
Verissimo has a lot of fun with academic pretension, and the way Vogelstein idolizes Borges, who he has tried to make aware of his existence for years until this convention occurred, is amusing.  And the author clearly has steeped himself in everything Borgesian.  As Borges and his friends talk about the crime and the two main suspects, Urquiza and Johnson, not to mention a third possible suspect, the Japanese scholar who Rotkopf twice in one night bumped into and knocked over at the cocktail party, they interpret the clues through a number of topics that are Borges obsessions: mirrors, libraries, language, doubles, writing, detective stories, history and alternate history, the danger and power of mysterious texts -- and on and on.  And there is much discussion of the British magus and cosmographer John Dee, who served Queen Elizabeth I and hung around the court of the occultist King Rudolf II of Bohemia, since Dee is cited by Lovecraft as the English translator of the Necronomicon, which perhaps may have played a part in Rotkopf's murder.  According to Borges, John Dee is also the first person to speak of the so-called Eternal Orangutan, which given all the time in the world, would end up writing all the known books in the cosmos.  Wasn't an orangutan the killer in "The Murders in the Rue Morgue?"  Yes, an orangutan was the killer in that story.  Not that this particular locked room crime Borges and company ponder over will be solved by pegging an ape as the culprit.
Borges and the Eternal Orangutans is a legitimate mystery and a literary lark and it gets everything done in 130 pages. The solution plays fair and makes sense and is completely true to the spirit and style of Borges. I enjoyed it as much the second time through, knowing the solution, as I did the first time through, and I wouldn't be surprised if Borges himself would have got a kick out of it. It's a lot of fun, a tongue-in-cheek game with just enough heft.
Posted by scott adlerberg at 7:27 AM

Sounds great. Could also lead to me rereading Borges, which I've been meaning to do recently anyway.