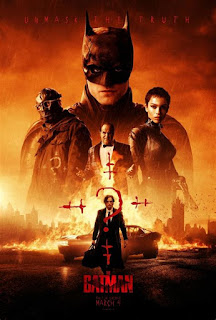 This isn’t the review I thought I’d write…

If you’re a Batman fan of a certain age, like me, you hung out on newsgroups and fledging web forums in the late 90’s and spent too much free time in comic shops. You will have heard a familiar question. “Why can’t we have a Batman movie that’s just a crime flick, like SE7EN? Preferably directed by David Fincher? Maybe adapting Year One? Where Batman is a detective?” The good news, to all those questions from twenty-five years ago, is that movie now exists.

Swap out David Fincher for Matt Reeves, and add in some lore that has been added to the comics in the past twenty years, and The Batman is exactly the movie I spent years saying I wanted. The city feels lived-in (hiya Glasgow), the colours are dark. The characters are flawed. The villains of the piece are mobsters and serial killers. The narrative is built around a mystery, and the trail leads deep down into a world of lies and corruption. And rain. There is a lot of rain. (Hiya Glasgow).

Reeves has successfully synthesized Taxi Driver, The French Connection, and Blade Runner (pre-Director’s cut) into the DNA of a Batman movie, while paying a strong tribute to Batman: Year One, Zero Year, and The Long Halloween. If that sounds like the film you want to see, then this is the film you want to see. On many levels -and for long stretches of the movie- this feels like the closest we've ever gotten to the source material.

The challenge for me is that I can’t review this based on someone I used to be. I’m watching it as the person I am now. Do I remove myself from the equation and judge the film purely on its own terms, as the film it’s aiming to be? Or do I review it based on what I bring to the conversation and the film I want it to be?

It’s difficult trying to have opinions about Batman in 2022. Somehow over the last decade he has become a lightning rod for tribalism. Whether it’s Snyderverse fans shouting down any attempt to move on, or Nolan fans who now insist any new film is just a copy of their favourites. Are you pro-Batfleck, pro-Battinson, is Keaton the one-and-only? Was the Joker movie a brilliant exploration of social issues, a shallow Scorsese rip-off, or a dog whistle for the alt-right?

My own personal tastes for Batman have shifted considerably as I’ve aged. I’m tired of seeing how damaged Bruce is. In the comics, the whole ‘broken tortured Bruce’ theme was a short-lived approach. The Frank Miller era. Before that, he was a hero with a tragic moment in his past. After that, he’s usually presented as a hero with asshole or control-freak tendencies. But in a pop-culture sense the broken Bruce has dominated for three decades now. Each new screen version has to be a meditation on “how damaged does someone have to be to dress as a Bat,” rather than embracing the idea that superhero stories are morality tales. 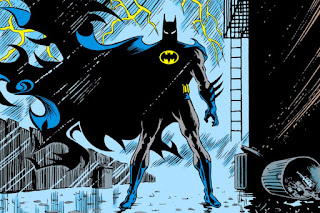 I’m firmly in the O’Neil and Adams school. The Grant and Breyfogle school. The Batman is a masked vigilante with one foot in the pulp tradition that birthed him, but he’s also basically a hero trying to make a difference. He experienced the ultimate fear as a child and has set out to try and save other people from going through the same thing. And he has a really cool car. There are many ways to present that without needing to obsess over how ‘broken’ Bruce is. Especially as it’s so often done under the guise of realism and there is simply no realism to Batman. He’s a fantasy figure. The field of psychology has spent a century exploring grief and trauma, and we know these things don’t lead to a Batman or a Joker. So, can we just move past this weird arrested-development take?

I think superheroes are a way to talk about good and evil, right and wrong. The secret sauce is in finding the balance that entertains both adults and children. I won’t say this film isn’t suitable for children, because I snuck into Tim Burton’s Batman in 1989 as a nine year old. I watched Alien, Aliens, Predator and Robocop all before I was ten. I think it’s an important part of growing up for kids to watch media that is too “old” for them, and to learn ways to get around their parents’ wishes and form their own tastes. However, I do have concerns with the idea of setting out to make a three-hour Batman movie that focuses so squarely on darkness and adult themes. I can’t shake the feeling that a certain set of arrested-development adults have stolen Batman away from kids and families.

This film is aware of that. The Batman feels like the conversation that has been playing out in my own head as my tastes have shifted. We meet a Batman who is two years into his ‘mission’ and is starting to realise that his methods aren’t working. Early in the film we see him viscously beat down a street gang to such a degree that he also frightens the victim he was there to save. We meet a Bruce Wayne who is isolated and broken. He has clearly used the line "I am vengeance" so many times that characters in the narrative use it as his name. There's a low-level self-aware humour to that. A joke that we're all in on. As the film progresses, Bruce is challenged again and again with his own failures, his own privilege, while also being shown that placing trust in others -and receiving it in return- can be a good thing. The final act sees all the pieces of this argument come together, as Batman is physically saved by Selina Kyle and spiritually saved by Jim Gordon, before jumping into troubled waters and emerging, reborn, as a symbol of hope. He offers a helping hand to a scared child and leads people to safety. As the film opens Bruce is talking about fear and vengeance. By the end he’s talking about hope. A running motif through the story has been the Riddler demanding that a rat be brought out into the light, and the final scenes see Batman in daylight, now viewed as a force for good.

Matt Reeves has been very deliberate about saying this isn’t an origin story. And we don’t get the over-played scene of Bruce’s parents being gunned down. Everybody knows why Bruce becomes Batman. On a deeper level though, I think this is perhaps the first live-action film to truly address why Bruce Wayne is Batman. What is his aim? What does he represent? Why does he keep doing this? If Bruce Wayne is only out for vengeance, that’s a very short mission. But he’s out there night after night, year after year, and there must be more to that. The Batman explores why he continues to be Batman.

And so this isn’t the review I expected to write. Because I’ve seen all the trailers, watched the early-released scenes, read the reviews. I expected to feel certain things and, for the first hour of the movie, I did. It felt too morose. The voiceover felt like a tribute to Rorschach, which set off alarm bells, considering Rorshach was an attack on the grittiest Batman takes. I was writing this review in my head already, "if you want another gritty psychopathic Batman, then you're in luck..." But then the message started to become clear, and the questions began to get interesting. I feel in some ways like this movie has the same issue The Last Jedi  ran into. We were presented with a Luke Skywalker who was old and bitter, scared of his own influence, refusing to step in and help. And fans rejected that completely. But then many seemed to check out their opinion at that point, and not see that the narrative of TLJ was about Luke realizing he was wrong (about a lot of it, not all of it.) And here, I’m seeing all the talk of how dark and dour and hopeless The Batman is, but not much talk about the heart of the movie being a repudiation of all of that.

Or I could just have been distracted by the best Batmobile since 1989. 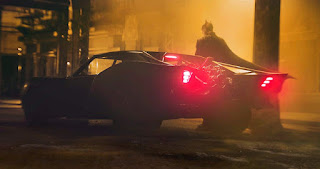