I recently caught up with Wes Anderson's film The French Dispatch, and I found that it has the best line about writing that I've heard in a long time:

"Just Try To Make It Sound Like You Wrote It That Way On Purpose."

The French Dispatch is a fictional mid-twentieth century newspaper run by Americans but operating in France that, as the film's narrator says, is "A factual, weekly report on the subjects of world politics, the arts (high and low) and diverse stories of human interest.”  The words about making what you write sound the way it does on purpose are spoken with gentleness by the magazine's editor Arthur Howitzer Jr. (played by Bill Murray), and it's hard to imagine any editor saying anything to a writer more well-intended. 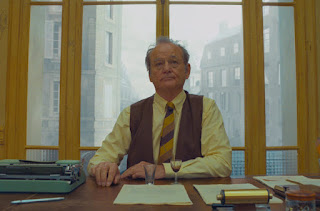 I laughed when I heard this line, which is said more than once in the movie, because, after all, it's a simple line but it so catches the very essence of what you're trying to do when you write.  And that goes for any kind of writing, fiction long-form or short, non-fiction in any of its guises. It's a central line in a film that is a love letter to a highly idealized, in Wes Anderson fashion, past time when such things as high-end magazines where writers ruled and were catered to proliferated.  I thought the whole thing downright irresistible, not to mention very funny, though I am, I should say, someone who has liked nearly every Wes Anderson film so far. If J.D. Salinger served as inspiration for The Royal Tenenbaums and Stefan Zweig, among other pre-World War II central European writers, for The Grand Budapest Hotel, writers such as Joseph Mitchell, A.J. Liebling, Mavis Gallant, and James Baldwin are models in The French Dispatch.  And The French Dispatch is his most writer-infatuated movie yet, almost like candy, I think, to any writer watching.

As a side note, it occurred to me while watching The French Dispatch that Anderson, if he set his mind to it, could construct a truly hilarious send-up of a mystery story.  With his love of artifice, misdirection, and eccentric characters, and with his Rube Goldberg-like ingenuity, Anderson could do an isolated mansion-type mystery in a way that would be ridiculously complicated and a lot of fun.  I doubt he has plans to make such a movie, but if he did, I'd race to see it.

"Just Try To Make It Sound Like You Wrote It That Way On Purpose."

Great advice.  It does still leave a question hanging, though.  Even if you did it on purpose, made those choices in language and structure and tone on purpose, went that way with the plot on purpose, does what you did on purpose work?

Posted by scott adlerberg at 8:23 AM