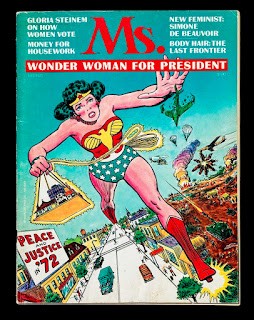 In December of 1971 New York magazine featured a very special, one-time supplement with its otherwise typical distribution. Ms. magazine was the creation of Gloria Steinem, a notion born from her work in journalism and the publishing industry and years of activism.  She worked with publishing executive Patricia Carbineto to create a magazine committed to highlighting and spotlighting feminist ideals and concepts. The magazine and supplement sold out in eight days, proving this new idea had an audience.

Ms. magazine, proud and on her own, hit the stands and stores in July 1972. The first issue pulled no punches. “We Have Had Abortions,” perhaps one of the most defining and ground-breaking articles of the time, featured 53 famous American women declaring their truth, they had undergone abortions. Abortion was still illegal in most of the U.S. at this time and participation in this feature was courageous.

Gloria Steinem, Nora Ephron, Judy Collins, Billie Jean King, Susan Sontag and Dorothy Pitman Hughes added their name to the petition, among others. The hope of these women and the writers of the article was to save lives by casting aside the stigma of abortion and the shame and guilt that is forced by society. They hoped to move the idea of a woman commanding authority over her own body to law.

And all these years later, we are fighting to keep those rights.

Posted by Marietta Miles at 7:47 AM