What's Your Book About?

I've been reading Zadie Smith's essay collection from 2018, Feel Free.  She writes about so many different topics so well -- reading, hip hop, dance, art, politics, just to name a few -- and from the point of view of elegance and grace, as well as humor, everything is a pleasure to read.  Naturally, she has a good deal to say about writing, and her thoughts on the topic are as insightful as you'd expect.  In one of her shortest pieces in the book, I came across something that struck an immediate chord with me, and it articulated something I've thought about for a long time but never had in my head as lucidly as she lays the point out here.  It's in her short piece "Notes on NW", which, she explains, she wrote in response to a question from the Guardian about her novel (published in 2012) of that name. 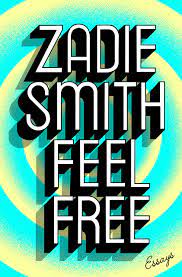 The question is "What's this novel about?"

A simple and obvious question, and a question that readers and other writers ask writers all the time.  And it's a question that pertains not only to novels, obviously, but to short stories also.  "What's your story about?" From my experience, it is not a question most writers appear to have trouble answering.  Answers can be long or short, depending on the writer.  But I've always found it a rather hard thing to answer myself.  Not because, I hope, any novel or story I've written isn't actually about anything, but because, well, as Zadie Smith puts it, "My books don't seem to me to be about anything other than the people in them and the sentences used to construct them."

Exactly.  That expresses it.  I mean, in answering the question about what your book is about, you can always describe the core of the plot (which is something I do and that's not nothing), but beyond that, I find it difficult to go.  To say a book I wrote is about (plug in a "theme" word here, or a "social problem" word of any sort here) is anathema to me, I realize.

Zadie Smith goes on: "Which makes NW sound like an 'exercise in style', a phrase you generally hear people using as an insult of one kind or another.  But to me, an 'exercise in style' is not a superficial matter -- our lives are also an exercise in style.  The hidden content of people's lives proves a very hard thing to discern: all we really have to go on are these outward manifest signs, the way people speak, move, dress, treat each other.  And that's what I try to concern myself with in fiction: the way of things in reality, as far as I am able to see and interpret them, which may not be especially far."

Use language to create a fictional world from the inside out, as it were.  I feel so simpatico with this, and it just amazes me how often I hear other writers launch with great gusto into describing what their book is about, when what their book is about, that in and of itself, is often the least interesting thing to me about their book.  Now everyone's different. I understand that. And no one is saying that books worth anything are exercises in style only. But to expand on something else Smith says in this piece, I find that above everything else I strive for in writing, I try within the limitations of my abilities to create people, evoke landscapes, describe physical things through language. Simply that.  There's the struggle, the thrill, and the challenge. I spend little time mulling over what my story or book is about. And what a book is about (theme word, social problem word) may be consequential, but for me at least, at this stage in my reading life, it is rarely the selling point, the come-on, that will get me to pick up someone else's book.