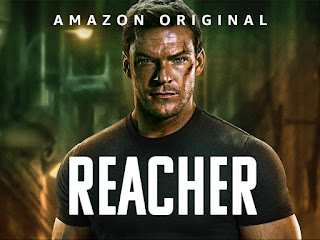 Finally. After 26 books and a short (ahem) feature film career, Jack Reacher is finally getting the proper treatment. The new TV series, Reacher, premiered Friday on Amazon Prime and after watching a few episodes, I can say it has several things things going for it.

The first is arguably the most important—the physicality of the lead actor. Reacher is a huge guy. It’s not an incidental attribute to the character. As anyone who’s read one of the books knows, it’s key to everything. And the hulking actor Alan Ritchson fits. He also gets the deadpan element of Reacher’s personality: analytical but capable of cracking a joke—if he wants to.

“We were very lucky to find Alan. He nails it on every level,” Child said in an interview with Denver’s ABC 7 (he lives part time in Fort Collins).

Second, it’s a TV series and not a movie. The TV format is just better for crime fiction series. Remember the different beloved series that tried to for successful runs as movies? Janet Evanovich’s Stephanie Plum, Sara Paretsky’s VI Warshawski, and Lee Child’s Reacher are some. Then think about the TV shows, where the characters have time to develop into an ensemble and the plots have time to twist and turn. Think Craig Johnson’s Longmire or Justified (yeah, I know that one was based on just a Elmore Leonard short story, but let’s not quibble when the end product turned out to be genius).

This season of Reacher gives us just one book (the first in the series, The Killing Floor), not an inexplicable mish-mash of several books and a resulting choppy narrative like the movies did. This isn’t to say that the show is a deep and profound look at loss or corrupt law enforcement or small town politics. It’s not. But it’s a head-butting, leg-breaking, no-middle-name good time. Just like the books.

Glad you mentioned the leg breaking. Now that was funny.