It's February and that means that if you live in a place where the winter is cold, you're probably sick of the low temperatures and can't wait for things to warm up. That's how I feel anyway, a typical February feeling.

But the frigid spell we just went through in New York prompted me to revisit a movie I saw years ago when it came out and found is available now on Apple TV.  It's Atanarjuat: The Fast Runner, from 2001, the Canadian-made movie that was the first feature-length film to be shot entirely in the Inuktitut language.  The director Zacharias Kunuk is Inuit, the film's writer Paul Apak-Angilirq (who died of cancer before the film was finished) was Inuit, and the production company for The Fast Runner was primarily Inuit-owned.  The film did well and won awards from the time it premiered at the Cannes Film Festival in 2001, and I remember reading the great reviews and being eager as hell to see it. 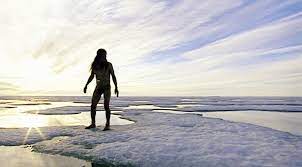 It's so rare to see a movie that takes you into a world you are all but entirely unfamiliar with, and The Fast Runner, for most people, does that. And it tells a tale from Inuit legend that involves murder, jealousy, and revenge. It's about strife within a family and a community.  Inuit noir? Arctic noir? I'm sure some crime fiction-loving person somewhere has described it as such, but at this point, the use of the word "noir" is so overused it's virtually meaningless and I sometimes cringe on hearing it.  The Fast Runner is just a riveting tale that, as myths and legends often do, is rife with base human activity, and it is also a story about justice and how healing, despite the impediments and only up to a point, can be achieved.  It's a universal tale, in other words, and on all levels, visually and narratively, it's damn near unforgettable.

Why that title, if you were wondering? The movie has its name because the main character, Atanarjuat, is literally a fast and strong runner. It's his speed and endurance that save him when he is being pursued by a gang of his enemies.  The sequence with him running naked and barefoot across sheets of ice below an endless Arctic sky, a long sequence done in a style documentary-like, no special effects, an actual man running naked and barefoot across the polar ice, is remarkable.

Whether you like the cold or not, whether you have good heating in your living space or not (and I hope you do), The Fast Runner is a perfect movie, though hardly a cozy one, for late winter.

Posted by scott adlerberg at 9:35 AM