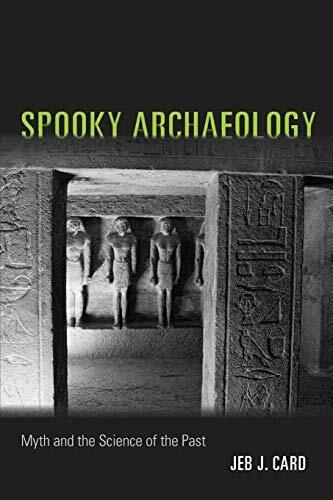 Spooky Archaeology: Myth and the Science of the Past

“How did we come to a place where the most recognizable explanation for the human past is space aliens?” That’s a striking question, asked late on in Jeb J. Card’s Spooky Archaeology: Myth and the Science of the Past. I should note, in all fairness, that it’s not the key question of the book. Card is handling a much larger and broader history. But it is the question which led me to seeking the book out.

My long-time reader will know I have engaged in a number of sub-culture deep-dives in recent years. Bigfoot. UFO’s. Atlantis. Ancient Aliens. The occult. I usually pass this off as research for my books, fishing for interesting ideas to play around with for 80,000 words of fiction. But there has been a deeper drive behind it. The last decade has seen the whole world seem to splinter into factions of ideas, and most-troubling has been the drive towards anti-expert thinking. It's a push that leads to us doing nothing about climate change. A push that leads to Brexit because we’re ‘sick of experts.’ A push that leads to Trump. And yadda yadda yadda a bunch of people in shaman cosplay storm the US Capitol. But tackling each of these issues can feel too large, too divisive, and so instead I turned my obsessive streak towards subcultures. Why do grown men dress up like commandos to go hunting for Bigfoot? Why do believers try to reinvent all of science to accommodate their idea of a giant ape in North America (who may-or-may-not be able to teleport?) Why do people cling to the belief that an alien spacecraft crashed in New Mexico in 1947, even after the full truth of the incident had been available for decades? Even after an archaeological dig was carried out on the ‘crash’ site that found no signs of a crash? How did Plato’s fictional and allegorical account of a lost city -understood as such for over a thousand years- somehow transform into something people believe is a ‘genuine’ myth? Why do people still search for this allegorical fiction? In each case, I started out thinking these sub-cultures would be an interesting way to try and understand obsession, and to try and understand how identity seems to be coming into conflict with expertise. But more and more, I came to find this was all connected. The bigfoot LARPers. The UFO crew. Those who believe ancient brown people were too stupid to move rocks. It all added up to the same thing, to this anti-science, anti-expert, anti-proof thinking.

“Mainstream science” is wrong. The “lamestream media” is lying to you. The government are covering up Bigfoot. And, somehow, also covering up the existence of aliens who have the technology to travel millions of light years but only ever seem to turn up when it’s dark. Archaeology is wrong, or worse- the Smithsonian is hiding the truth. Only a precious few people can be trusted to tell you how it really is. But they seem to need your money along the way. Before you know it, a creationist is sharing a platform with Bill Nye, to millions of viewers online, insisting that science can only observe the present and we can’t know anything of what happened in the mysterious past, except for what is written in one book. And there are people who live below ground that drink the blood of humans. And then, yadda yadda yadda….shaman….capitol.

I find myself more and more interested in the question of folklore. And to what extent is fake news a feature or a bug? Is it just an extension of that need for folklore? We seek out narratives that feel true, that comfort some part of our identity. We are emotional and anxious apes, yet those of us who most want to argue for progress keep talking about reason and how all people can be reached with the right facts. I now believe that misses the point of who and what we are. Rome has been burning for a while now, with the flames on show in ‘documentaries’ on tv channels that use names like ‘History’ and ‘Discovery’ as cover for pushing dangerous information. And I don’t think we can put out those flames until we reckon with ourselves, and with what drives us.

This is supposed to be a book review.

All this by way of saying:  Spooky Archaeology: Myth and the Science of the Past scratched my exact itch. I should point out for balance that the book isn’t a skeptical or debunking book as such. This is more of a history, looking at the development of archaeology and modern myth, to try and decide to what extent archaeology contributes to its own ‘spooky’ reputation.

Humans have been creating a spooky and mysterious past ever since we began encountering the remains of people who came before us. This inspired different versions of fairy lore across the world, as we imbued 'ancient' stone relics with mystical origins long before we had a real understanding of our own development. From here, Card takes us on a journey through mistakes, misdirections, cons, and romantics, tracing the evolution of archaeology from myth-making to antiquarianism, to modern science. The first full-on lightbulb moment for me in the book was the simple realization that we constantly 'other' the deeper past by placing the cultures and remains of our deeper ancestors in 'Natural History' museums, along with rocks, fossils, and dinosaurs, instead of the art museums that our more recent forebears are housed in.

This book is full of insight and learning points. From the myths and ideas propagated by early antiquarians before the hieroglyphs were translated, to the creation of theosophy in the Victorian era that sought to push back against modernity by reaching for the ‘spiritual’ past. From the fiction of HP Lovecraft who combined these theosophical ideas with the ‘myths’ of Atlantis and the Egyptology craze, to the invention of flying saucers which were -and remained- steeped in the same theosophy ideas. Aliens who are both creatures from another world and visitors from another dimension, or beenath the sea, or from bases underground, and sometimes bringing Bigfoot with them. And now a man with silly hair is one of the most recognizable memes on the internet for the passing of racism as the real history of our people and of every scientific advancement. (And if you think I’m being overly dramatic about the dangers and damages of that show, know that it’s all based on the work of Erik Von Däneken, whose best-selling book Chariots of the Gods was edited by Wilhelm Utermann, who was a literal Nazi. A paid-up member. The same Nazis who cribbed ideas straight out of theosophy, and of a lost spiritual past, and who are now regularly linked to stories about UFO’s and people who live underground.These are the views, and the people, being platformed in these shows.)

The question Card is dealing with here is how much of this is encoded within the very nature of archaeology. A lot of these bad ideas have been spread by people doing archaeology. A drive to understand our past usually goes through myth and mysticism on the way to finding fact. Governments have been happy to use excavations, myths, and expeditions as cover for espionage. (The Yeti. The Titanic.) Card argues that “accepting our checkered past should be an exercise in ‘constructively deconstructing’” and I find his case to be solid. The book is more than solid. If you have any interest in any of the subjects I’ve mentioned today, you’ll find something interesting in these pages.

Now, if you’ll excuse me, Rome is still burning and there’s a hole in my bucket.