I finally caught up with Ghostbusters: Afterlife on streaming this week. I held off for so long because of my own aversion to the recent trend of storytelling-via-nostalgia. Not only tv shows like Stranger Things -  which is more of a nostalgia for pop culture than for the decade itself - but also the newest spin on 'legacy sequels' or 'requels' that hark back to a feeling a certain generation liked in the past. On a deep level I find the idea unhealthy. I see a reboot as a separate meme. A reboot -if done well- is an update, bringing the themes and ideas of an older story into the modern era, and reframing it to talk about now. These legacy films, by contrast, often feel like conversations with themselves.

There is an extent to which this is inherent in any ongoing franchise. As part of a genre essay I wrote for Crimereads a few years ago, I noticed that all sequels become a different beast to the original. Raiders of the Lost Ark may have been a mixed bag off references to old serials, H Rider Haggard, Erik Von Däniken, Treasure of the Serra Madre, Secret of the Incas, and heist movies, but Indiana Jones and the Temple of Doom is then in much more direct conversation with Raiders of the Lost Ark. Dr. No may have been the first film of it's kind, but every film they made afterwards was a Bond film, playing within -or challenging- the rules of Bond films.

But even with all of that accepted and unavoidable, I find my own tastebuds don't lean towards nostalgia. I've been left on the outside of culture wars over the Star Wars and Ghostbusters franchises, and in large part this has felt like a war over nostalgia. A certain generation of Star Wars fan needed The Last Jedi to give them a dopamine fix of seeing Luke Skywalker doing the things he did fire years ago -and more importantly perhaps, doing all the things they've imagined in their own minds over that time- not necessarily doing the things that Luke Skywalker -with all his baggage of internalised hatred, familial guilt, and trauma- would be doing as an old man if he were real. What, to me, was an interesting and true character arc was taken by many as a betrayal of how they felt as children. Likewise, the 2016 Ghostbusters walked headlong into a shitstorm of online hatred. I don't want to dismiss that the largest determining factor of that hate was undoubtedly misogyny aimed at the all-female reboot, but I also think there's room to admit that the film didn't feel the same as the original, and that feeling was a problem for many fans who go to franchises from their youth wanting a drug hit of nostalgia. The 2016 film doesn't play with the same DNA as the 1984 original. It feels more tightly scripted, it relies less on the genuine (and overlooked) ties to Lovecraft, Theosophy, and other fringe thinking. On a nuts-and-bolts level, it uses a different style of humour. Paul Feig brought much more slapstick and farce, and a far higher level of bodily fluid jokes. That's not a criticism. While it does mean the 2016 version isn't really for me, it also doesn't need to be for me. I have a version of Ghostbusters that I already like, and it's a big world full of lots of people who also deserve to have a version of Ghostbusters. In many ways, I would argue that the 2016 film is a better use of reboot money. Making something different, for a different audience in a different time.

From the first trailer it seemed clear that Afterlife was in more direct conversation with the 1984 original. And against he backdrop of the 2016 arguments, it felt like a deliberate move to pretend the all-female reboot didn't exist. Is that far? No. Rian Johnston, Paul Feig, and now Jason Reitman all set out to make the best films they could, and in an ideal world would be allowed to get on with that free of other people's baggage. But in the case of Jason Reitman he also had to know what he was walking into. He's the son of the 1984 original's director, he would have been a five or six year old child scampering round the set, and the legacy cast returned because of his involvement. Not only is there the inbuilt temptation to see Afterlife as a requel for people of my generation having a conversation with our childhood, it's always felt directly like one specific person of my generation having one specific conversation with his own childhood.

All of this as buildup to me pressing play.

Were these concerns valid? 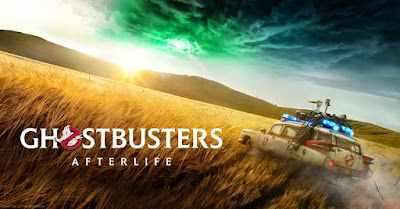 I found Afterlife more interesting as a curiosity than entertaining as a film. Over the long term, curiosities often end up ageing into being among my favourite movies. They ask questions that stick with me. It's way too soon to know if Afterlife will do that, so I'm left with the feelings it gave me in the here and now.

The film is in direct conversation with the 1984 original. Each character beat and plot decision in 2021 was clearly in relation to something that happened in 1984. As a viewer you are left to second-guess which archetypal role from the original each new cast member will end up playing. And the 2021 film makes many smart choices in this regard, playing with expectations, and allowing fresh looks on misunderstood characters like Louis Tully. And even for someone as nostalgia-averse as myself, there's a certain rush of glee that comes from hearing Bill Murray doing his Peter Venkman voice, in a moment that instantly makes you realise how long it's been since you've heard him doing it, and how much part of you wanted to hear it. But even in that moment we can see a tension between nostalgia and story. Dan Aykroyd and Ernie Hudson give us readings that sound like older versions of their characters, Murray gives us a reading that feels like he's had the 1984 Venkman stored in a box the whole time, waiting for one more chance to shine.

I would argue that Afterlife understands the origins of Ghostbusters more than any other spin-off -save for a few stand out episodes of the 80's cartoon- in grounding the story firmly into the Lovecraft and theosophy that so inspired Aykroyd. It's important to know he really believes in this stuff. Even the name Gozer wasn't plucked out of thin air, it came from a paranormal case in the 70's. Aykroyd crafted a story intended to mainstream a lot of ideas he grew up reading about. And he succeeded wildly. It's very much a story of the old ones trying to return, and plays into the secret sauce that Ghostbusters was never really all that much about ghosts, so much as a battle against demons and interlopers from a dark dimension. Ackroyd's deep sincerity was then buried away beneath layers of comedy and irony, from some of the best improvisors in the business. Afterlife isn't anywhere near as effective as a comedy, but it doesn't necessarily need to be. A second key ingredient is friendship. The 1984 film is powered by friendship, both on and off screen. For Afterlife Reitman keeps this element and encodes it into the very 80's-nostalgia-tinged story of a group of small town friends, misfit children who find each other. There's also the smart decision that these kids don't know about what happened in 1984. It's the generation above them who are defined by nostalgia. I'm tempted to find a knowing comment on nostalgia and reboots in that decision, and it makes me wonder if I'll come to reappraise the film over time, and find extra layers to appreciate.

But it's with a third element of the original that Reitman perhaps made the largest misstep for my own tastes. And it's the very heart of the movie.

Two of the most important characters from the 1984 original, from a character sense, are Egon and Winston. Neither of them get the pop-culture glory of Venkman or the spooky bona fides of Ray, but Winston is just an average working guy who rolls with every change thrown his way, manages to never be out of his depth, and helps save the world. Egon, by contrast, is so clearly out his depth and scared shitless from the ballroom on upwards, and yet keeps going, is the first to recognise each danger, and provides the key information to save the day.

Afterlife was dealt a tough card, in the sad passing of Harold Ramis. There are only so many ways to handle having a key legacy character missing, especially one who was secretly so important to the success of the original. Reitman takes the decision to frame the whole film as a love letter to Egon. On the surface, this is a good move. The story is driven by his decisions, characters are defined largely by his absence, and we get some very sweet emotional payoffs in the closing moments.

However, it's also this decision that ultimately leaves a bad taste. Egon is an absentee father. Okay, nobody is perfect and there's always room to explore that fallibility through legacy characters. But in choosing to do that through Egon, the character who is also being feted by the story, we are left being asked to accept that his absenteeism was something noble, something heroic, and in the final scenes we are asked to forget the lifetime of trauma and pain in one embrace between Egon's ghost and his daughter. Ultimately, in my own view, this does a disservice to Egon and weakens the film.

Will that bad taste last as I get more distance from the movie? Only time will tell. For now I think it's a film that remains trapped holding a conversation with it's own past, and the many smart decisions can't rise it above the bad ones.