The Beauty of White Noise

What people who write can tolerate as background noise has always been of interest to me.  There's the proverbial image of the writer sitting in a cafe scribbling in longhand (or nowadays, working on a laptop), and one thinks of say, Hemingway, ever the spinner of the most romantic images, doing his thing in some Parisian cafe with coffee (the liquor to come later in the day) at his elbow.  John Hawkes, a master at creating imaginary landscapes and bizarre characters, not a realist by any stretch of the imagination, said he could write with people in the room with him, his wife and kids, even if they were chatting away. On social media, I continually see people talking about what kind of music they like as their writing music, depending on what they're actually writing, be it a scene that's scary or calm or violent or sexual or whatever. To each his own, in this regard; I almost never write, or edit, with music on since it only serves to distract me.  I do find music helpful, from time to time, to get in a certain mood before writing, but that's about it. Overall, I'm a "silence" while writing person; the closer my surroundings are to soundless the better I focus and the easier I find it to work.

With age, though, I have to say, over the years, I have learned what I can and can't tolerate when it comes to noise.  For example, oddly, I find I can write non-fiction, an essay or review, in a coffee shop, if it's not a place overly crowded and any music playing inside, of whatever type, is not too loud.  It's easier to write in a public place if the people there aren't speaking English, like if I happen to be abroad, because I can't understand the conversations and don't get distracted by them.  In a bar relatively quiet, even, yes, with music, I can do light editing of anything I've written, fiction or not, and actually, I enjoy doing this, sitting and having a drink while editing a paragraph or two on my phone.  I guess I've just given in this second paragraph exceptions to everything I said about preferring silence in the first paragraph, but regardless, I'm just trying to be accurate.  In general, I'm someone who when working from scratch does aim for the quietest possible conditions, and this isn't always easy to have. Oh yes, and the other thing, other than public places, with people I don't know, I loathe writing with other people in the room with me. This I can't stand.  A couple of times I've gone on weekend writing getaways with friends (each time, we rented a house with several rooms), and while a few of the people would all sit at one table in the house's large kitchen, each person working on his own thing, I worked by myself in the bedroom I had.  Writing and solitariness, absolutely, go together.

A good friend of mine was recently telling me how he's rented office space to do his daily stint. For years and years, he's done a lot of writing, in Manhattan, in coffee shops, and he's been very productive.  But now working daily in this private space, in a building filled with rentable office space, he's finding the quiet extremely conducive to work and to upping his productivity.  It's not even expensive space to rent, and on hearing him describe it, I thought damn, I can afford that and asked him to give me the details of how to contact the people who rent the rooms. He reminded me that I work, though, meaning I have a daily 9-5 job, and that the offices are only open each day from 10-7.

"When would you go to work there?" he asked.

"You forgot you work." 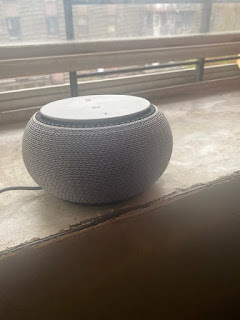 Still, I've taken a step in my own house to fight outside noise.  Most of that noise, by the way, comes from outside my window on my Brooklyn street.  It's a white noise machine I've invested in, the little thing pictured above, and so far so good with it. I turn it on and a susurrus noise comes out, steady and soothing, a little bit like the sound from a fan. I like it, and it works.  It's creates a noise you both hear and don't hear at the same time.  It smothers outside noise well and doesn't distract me at all.  I don't need it all the time, but if there's noise outside the house or in that's a problem for me, I turn it on and let it hum. Or whisper. I'm not sure what you call the sound exactly, but it's effective for focus and a tool I can see myself using for a long time to come.

Posted by scott adlerberg at 10:02 AM

I'm with you on needing silence. Fortunately it's onoy me and The Beloved Spouse here at home, so outside aren't much of a distraction, but I like the white nosie idea. I tried to write to music when I first got started, but it's too distracting. Songs with words distract me, and my background as a musician makes me tend to listen to instrumentals when I should be concentrating on my writing.