I’ve had a lot of things going on lately (car accident*, laptop meltdown**) that have caused me no small amount of stress. Getting the aftermath of all that sorted out derailed my usual crime television routine. I’ve finally been able to sit down a bit the last few days, and the perfect show for my current mindset popped up. 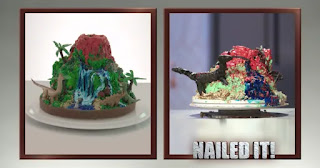 The sixth season of Nailed It! released on Netflix this week and it’s sheer escapism just when I need it. Yes, the crime shows I usually watch are also escapism, but there’s always some part of my brain that’s analyzing them—what works, what doesn’t, how they develop characters, whether the solution is satisfying. Nailed It has none of those things. There’s no crime—unless abusing small kitchen appliances has become a felony—just ridiculously fancy example cakes that inept bakers try to copy.


Host Nicole Byer is funny but never descends into meanness, which is especially impressive when you’re having to eat something that tastes like gravel or looks like the cat coughed it up. Some guest judges are better than others, but she’s able to pull along the ones who aren’t so that they don’t detract. If you haven’t watched yet, I recommend you start at the beginning. The show has honed its comedic attitude over the six seasons, making increasingly funnier use of its subtitled baking tips.


I can’t wait to see what words of wisdom this season brings.

* I’m okay. The verdict is still out on my car, though. Lots of damage when the guy plowed into me and spun the car around.