The other day, I started watching season 7, the last season, of Bosch, and I was glad to see that the first episode of the season kicks off by establishing the exact day and year the events are occurring: "New Year's Eve 12/31/19".  This makes it clear that we are going to be watching a story that takes place before the Covid pandemic hit, and knowing that, I settled in ready to enjoy something that might be dark in the way of this superb show but that also, almost by definition, would have a nostalgic feel to it.  And we're talking about a date and time, close to midnight on December 31st, 2019, that is less than two years ago!  But as we all know, that's how fast the world has changed in that brief time. 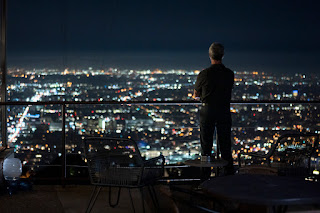 The feeling I experienced seeing that Bosch graphic and going on to watch the entire season is not unlike the feeling, remarked on by many, that came with watching the Netflix series Pretend It's a City.  That's the one, released by Netflix on January 8, 2021, where Martin Scorsese, who directed the series, has a series of talks with his friend, Fran Liebowitz.  Most of these talks center around what it is like to live in New York City and to have lived there for a long time. Liebowitz, as usual, is very funny and very observationally accurate.  But like a lot of people, I watched this series during the height of the second wave of the pandemic, when New York City was still under partial lockdown, and to hear her talking about crowded streets and congested subways and tourists who don't know how to comport themselves on the sidewalks of Manhattan, created a pang in me for a New York that had vanished, as it were, overnight.  The series must have been filmed in the recent past (Bosch season 7 was shot during the pandemic) and it is set in the recent past, but it was not possible to watch without feeling that this all happened a good while ago, in a different era.  There they are, people moving around freely, maskless, without fear of contagion.  There they are shaking hands (no bumping of elbows) and talking (in Bosch) in each other's faces. This is the world that once existed, I kept thinking while watching the Scorsese series and the final season of Bosch. This world may come back again, probably will, but who knows when?

I'm currently reading a contemporary novel that was released this summer but that must have been completed before the pandemic broke out.  There's not a single mention of anything connected to the pandemic in the book. This, of course, has been true and is going to be true of any book, movie, or series that may be newly released and is set in the present but that was finished before the Covid-19 onslaught.  With each story like this, there is a little bit of a time lag to mark it as the last of a group of stories conceived of and done before the prescribed rules of engagement for human interaction in so many places shifted.

Question: Should everything written now, assuming it's supposed to reflect the present, incorporate the pandemic in some way?  If you live in a part of the world affected by the pandemic, which seems to be everywhere, I don't see how a story could not.  Masks, variants, social distancing, the transformation of office spaces, and anxieties that didn't exist before -- one could go on and on with the details.  But I'm thinking that most writers who started books during the pandemic, and who see how the world continues to be in a "fog of war" state dealing with the pandemic, have wrestled with how to incorporate this current reality into the fabric of their narratives. I know that I'm about to start a new short story and that by setting it in the here and now, though it has nothing to do with the pandemic per se, I will have to take account of the pandemic's existence in the story.  I will need to do that or I will be saying without stating outright, as Bosch season 7 wisely, did, that I'm setting my story in late 2019 or before.

It's odd to think about, but it does seem as though we're at one of those key junctures in history.  Write a book set 18-24 months ago, and you're writing something of a historical novel.

ignored the pandemic in the book i just completed, and will also do so in the next. It will just slow the story down, and, since it will be a year ir two (or more) before the books are available, I can't imagine too many will want to wallow in it as we make the inevitable progress away from how bad things have been. I'm sure I'll refer to it in a future book, a character looking back. Frankly, anymore my books aren't intended only as escapes for the reader. writing them is my time away from the mess we're in.

I submitted a book a few weeks ago that deals specifically with the pandemic. No idea if it'll be bought or not, but I couldn't avoid it. That said, the more traditional shit I write (2 other new novels I'm cleaning up now) does not mention it. I haven't decided which year to place them either. Oy vey! It is a bit of a dilemma, I think.

The current book I'm working was always going to be set in 2017 for narrative purposes. I guess one day I'll have to address the pandemic...but im not looking forward to it