Director Richard Donner died last week, and as I was thinking back on his career, I recalled with fondness how much I loved The Omen as a kid.  It's my favorite Donner film and, in my view, his best.  Several years ago, I was asked to write a short piece about it for a local newsletter, and I thought I'd post it here now, as a little tribute to the director and a fond memory of the film. 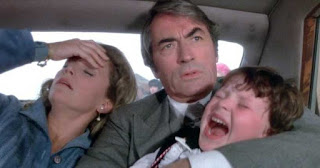 I first saw The Omen when it opened forty years ago, at the age of 14.  I hadn’t yet seen The Exorcist, which came out three years earlier, in 1973, but with so many horror movies out in its wake having to do with the Devil or possessed children, I was aware before going to see The Omen what its subject matter covered.  To be more precise, I should say that I had expectations in a general sense.  The truth is that I was raised in a household where religion, including Catholicism, played no part, and so (it seems hard to believe now) I actually had never even heard of the concept of the anti-Christ before seeing the film.  I knew going in I’d be seeing an evil kid movie – the commercials suggested that clearly enough – but the specifics of what made the kid evil I found to be engrossing and full of surprise as The Omen’s story unfolded.  At 14, seeing it with friends over the summer in 1976, I found the movie to be really scary and suspenseful, and I remember how a group of us for the rest of the summer kept wanting to shave each other’s heads to make sure none of us carried the telltale mark of 666.

Since that initial viewing, I’ve seen The Omen a number of times.  I remember watching it on several occasions when it had its first run on HBO in the late 70’s.  But I hadn’t seen it in at least thirty years when I watched it the other night, and I have to say I was curious to see whether I would find that it still holds up.

I’m glad to report that it does.  At the time it premiered, The Omen had a couple of scenes that were particularly unsettling.  One involved the nanny who hangs herself at a child’s birthday party, and the other is decapitation of a major character by a plane of glass.  In terms of sheer graphic dismemberment, the beheading scene has long since been surpassed in films, and yet this scene remains a memorable one.  It occurs at a pivotal point in the story and happens to somebody sympathetic.  And the nanny suicide remains as startling as ever; it’s a parental nightmare of a scene if ever there was one.

Richard Donner directed The Omen, and what he brought to it is a strong storytelling sense.  While watching it for the first time in decades, the movie’s pacing struck me.  Nothing in The Omen drags.  Each scene begins where it needs to, says what it has to say, and cuts sharply to the next scene.  And the narrative is clear and uncluttered; the plot proceeds in a straightforward fashion, its momentum building as clues and frights lead to a tense and dramatic finale.

A word should be said about the acting.  It helps that the cast plays things straight – no camp, no eye winking.  Gregory Peck and Lee Remick are convincingly beleaguered as the parents of a child they love, then are puzzled by, then come to fear.  Peck’s usual gravitas works well in keeping the supernatural grounded in a recognizable world.  His reactions to what is unfolding are the skeptical reactions any sane parent would have to what he is learning about his kid.  And hats off to whoever did the casting of the main supporting players: David Warner as a reporter and Leo McKern as the Van Helsing-like expert who sheds light on the true nature of the mystery bring total conviction to their roles also.  They come across as real people, and of course, in horror, the more real the unnerved characters seem, the more plausible the uncanny things happening to them seem. Then there’s Billie Whitelaw, the second nanny for little Damien, and though she’s not on screen that long, she’s a character you never forget – Mrs. Blaylock.  Once she enters the household, we’re again in the realm of parental bad dreams…. 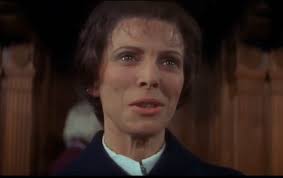 Finally, there’s the music, composed by Jerry Goldsmith. It won the Academy Award for Best Score in 1976, and I remember buying the soundtrack album as a teenager.  No, I was not a goth kid into Satanism, but I did, and still do, consider it a great score. Much of it is choral and creepy, sung in Latin, but there are evocative gentler themes, too, during the film’s calm moments.  It’s a beautifully modulated score that contributes mightily to the film’s impact.  Indeed, whenever I think of the movie now, I start hearing its Latin chant in my head.

It seems like my first time seeing The Omen was yesterday.  There’s nothing like getting scared by a movie as a kid.  That experience sticks with you.  I’m just glad that forty years later, watching the film again, I still enjoyed it.

Posted by scott adlerberg at 7:44 AM