Extra Ways To Die In Glasgow 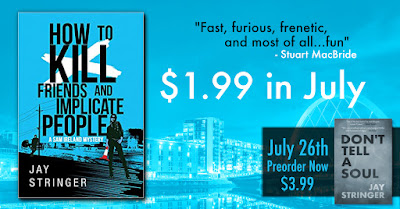 My two Sam Ireland novels are on sale at the moment over at the Zon. In the UK you can pick up Ways to Die in Glasgow and the sequel How to Kill Friends and Implicate People for £0.99 each. In the US How to Kill Friends... (Or Ways 2 Die as it was called early in the process) is available at $1.99. 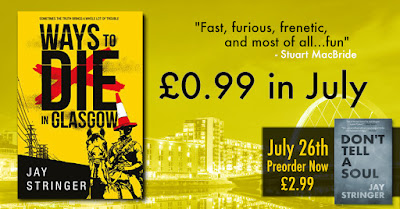 The development of this series was a total accident.
Ways to Die in Glasgow was originally written as a standalone and (spoiler) the main character died at the end. That was my original vision for the story, and for the point of the story. Everybody died. When Thomas & Mercer bought the book, really the only change we talked about was keeping Sam alive. They felt the original ending was too brutal, and broke a contract with the potential reader.
They were right.
I didn’t know it at the time, but in hindsight I can see it as a transitional point in my writing. Away from flirting with noir, and more towards my natural instincts for humour and -quite often- a happier ending. As a result of the change, Sam was still alive and eligible for a sequel. While Ways to Die was being prepped, my editor asked me to look at writing another Sam book. That’s what led to How to Kill Friend and Implicate People, a book I hadn’t planned on writing, going on to become the closest thing I’ve had to a breakout. It picked up an Anthony nomination in the United States and was shortlisted for the McIlvanney Prize in Scotland. And, while that book was in production, we talked about a third.
Book Three never came to be. Publishing be publishing. But I did some work on it, including the first few chapters, and after a few years in the vault I thought it might be fun to put some of it up here, for free. If people enjoy this, I may post the original ending in a few weeks. Show you all how close I came to ruining the book.

Baz and Nazi Steve knew the evening had taken a sartorial turn when they found a severed hand on the golf course.

It was midnight, or just after. They liked to play at Sandyhills Golf Club, and it was much easier to do at night. There were less people on the course, and nobody cared about things like 'membership fees' or 'public urination.' The torches and guesswork only added to the fun.

The previous summer, Baz had arranged a tournament. They'd called it the Jakey World Series, and over a dozen people had taken part. The only rules were that nobody could shout 'fore,' and that everybody had to share their drinks. Drugs were a different matter, people were expected to pay for those. Baz had come second, and Nazi Steve third. The trophy had been won by their friend, Cal Gibson, because he’d had the idea of coating his ball in a florescent paint that glowed in the moonlight.

Baz's golf bag was the stuff of local legend. It only held two clubs -the big one and the flat one- but was always stocked with spirits and beer.

They were on the eighth hole when they found the hand. It was in a sand trap on the edge of the putting green, with a trail of blood poring towards the flag. Nazi Steve pulled out his flag and started taking pictures with his phone, but the electronic light of the flash was casting an odd glow onto the palid flesh. He gave up and started googling something.

"I knew it," he said. “Sartorial is about clothes an' that."

"Exactly," Baz said, pointing at the hand. "And some guy used to be wearing that."

Nazi Steve let that one go.

They stood and stared at the hand for a few minutes, taking turns sipping at a bottle of voddie.

"Well it's touching my ball. What do the rules say about that?"

Baz thought that over. "I don't think the rules really have anything to say about severed body parts. I tell ye what, I'll turn around, look the other way, you do whatever you wanna do."

Baz swivelled on his feet, kicking up sand as he went. Nazi Steve pulled out the flat club and pushed the hand away. He picked his ball up and tossed it underhand up onto the green.

When Baz turned back, he lit up a joint and took a large pull before passing it to his friend. "What's the score?"

"Shit, I thought you was keeping track."

They both giggled as they stepped up onto the green. The laughter died away when they saw the briefcase. And the handcuffs fastened to the handle. And the blood on the metal.

Nazi Steve took another hit on the joint. "See, now that is something the guy was wearing. Now we're talking sartorial."

"You've seen the movies. Some sweet innocent bozo finds a bag full of money, or drugs, and then the bad guys come looking for it."

Nazi Steve bent down to try and open the case, but it was latched shut on a combination lock.

"We should just walk away," Baz said. "Pretend we never saw anything. Leave it to the polis."

"Here me out. See those stories? It's always that some daft wee cunts tries to keep the money-"

"Or drugs, aye." Steve took another belt. "The baddies come looking for what's theirs, and our man-"

"Okay, or woman. He or she gets in trouble because they think it's all free. But if we let the Polis deal with this, they'll take the case. Whatever's in it becomes evidence, they impound it. And whoever lost it? They lose out."

"But if we take it, we're just providing a service. We find the guy who lost it, return it to the them, and they pay us a reward for our trouble. Come on, this is a genius idea. Have I ever let you down?"

BAZ and NAZI STEVE face away from us. They’re stood next to each other at urinals.

NAZI STEVE staggers. He turns to face BAZ. He throws up down Baz’s front.

"Okay,” Nazi Steve knew what Baz was thinking of. “That's a daft question. But I'm right about this. Come on. We do someone a favour, we get some cash, we move on. What could go wrong?”

They were halfway home in Baz's car before he changed his mind. He turned the volume down on the MP3 player' muting the pirated copy of Loki's new album. "Haw, we gottae go back, man."

"It's no good. Bad idea. We'll only get into trouble."

"It's too late now, our prints are all over the case, and the blood will be on the car seat."

"See that, right there, was probably when we should have known not to do it. The bit when we were thinking about blood."

"Aye, fair point." Nazi Steve Sid. "But we're in it noo. We need to stick to the plan and find the guy who lost this."

"We could just say 'anyone who lost a briefcase, raise your hand.' Trick question, like. That'll be a giveaway." Nazi Steve paused to look at Baz's pissed off expression. "I'm kidding on. Don't worry.  I have a plan. We just need to follow the clues."

Nazi Steve pulled the severed hand from inside his coat. "Well we've got this, for a start."

Baz nearly skidded off the road. "What the fuck?"

"It's our best lead, man. And we couldn't just leave it there, could we?"

"Yes." Baz's volume rose and his voice cracked. "That's exactly what I said we should do. But you had this biiiiiig plan."

"In retrospect," Nazi Steve's tone was subdued. "I think the drugs may have had something to do with it."