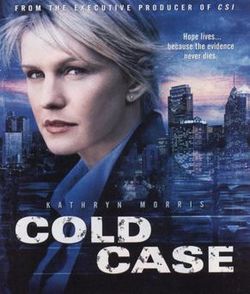 It's not every television show that makes me emotional. Despite what you might think, it's pretty rare and often coincides with a series finale. But when it comes to Cold Case, I've teared up about three times watching the few episodes of season one, making it a truly special show.

My wife finds a lot of our shows we watch together. I’m not into her “murder shows” (AKA all those true crime series) but but both love detective shows. After reading some review somewhere, she started watching Cold Case a couple of weeks ago. One evening, I waltzed into the TV and she was finishing up the second or third episode of the series. I recognized Kathryn Morris as the lead for this show we just never watched. We both remember the commercials, but I had to go back and research when it actually aired (2003-2010). Shrugging, I sat down and watched the end of the episode.

Then immediately asked to watch the next one with her.

Kathryn Morris plays Lilly Rush, a homicide detective specializing in cold cases. She has a lieutenant (John Finn), a pair of peers (Jeremy Ratchford as Nick Vera and Thom Barry as Will Jeffries), and, a couple of partners in the first half dozen episodes. Justin Chambers (Karev from Gray’s Anatomy) was in the first few episodes and he left as was replaced by Danny Pino as Scotty Valens. Not sure the reason Chambers left, but whatever.

Each week, the team tackles a cold case. The, ahem, cold open is always the flashback to the murder. What helps put you in the mood for the time period is the extensive use of era-appropriate music. There we see the characters and the victim and witness the crime.

Flash to the present and Lilly, with her new eyes, does her research and starts to investigate. In the nine or so episodes I’ve watched (up through episode 12, but I missed episodes one and two), Lilly always gets her bad guy.

But that’s not what makes this show special. In nearly every network TV cop show, the bad guy is going to get caught. Whether it’s the science of CSI or the foot leather of Colombo, the bad guy always lose. Cold Case is right there following this same pattern.

So why has it yanked tears from my eyes on at least three separate times?

Because it makes you care.

And those last scenes.

The Fun of Casting

For stories that take place more than a decade in the past, the casting director had the fun task of finding actors to play the same characters at different stages of their lives. This is incredibly effective, especially when it involves kids. Multiple times during the episodes when Lilly goes to interview a person, the present-day actor and the past actor will flash back and forth. It’s to help you remember which one is which, naturally, but it jolts your thinking.

Some of these crimes involved characters who were children at the time, but no matter how old they were, they still witnessed or were affected by a crime. By having the younger actors flash in and out, it serves as a visual reminder that, for many people involved with a crime, they remain in that time forever. The father who lost his daughter will always be that age in which the cops gave him the bad news. Ditto for the young men in 1964 who had to hide their homosexuality for fear of violent recriminations.

The Fun of Seeing the Actors

The oldest episodes are now seventeen years old. That’s not too far in the past, but it’s just far enough to where the wife and I have seen them in other roles. I recognized Silas Weir Mitchell’s lips when they were all that the camera showed in early scenes of his episode. He played Monroe in Grimm while another future Grimm actress, Bree Turner, also appeared. The most fun so far is Brandon Routh, the future Superman in Superman Returns.

Every last scene shows the bad guy being led away by the cops. And in every scene, you get the actor flashback to the past actor. So you’ll see the old man being cuffed and walked past the young boy he killed. And you see the young actor! Ditto for all these episodes. In "A Time to Hate,” the one from 1964 and the murder of a gay man, not only did the creators show you the young actor, but they reinforced the message by using The Byrds’s “Turn Turn Turn.” I could hear the wife sniffling just as she heard me.

How did we miss this show first run? Not sure, but I’m glad the wife found it and we’re watching it. In the cop genre, there are a lot of good shows over the years, but I can’t think of many who pull at the emotions so frequently and so well.

I know what we’ll be watching the rest of this summer.