Murder in a Belgian Town: The Break

1. A city cop in semi-disgrace after a case gone bad relocates to a small town in the country to resume his career.

2. Young widowhood for the same cop, which leaves him as the sole caretaker for a teenage daughter.

3. A degree of apparent mental instability in this same cop.

4. A lovely-looking small town, the one that the cop moved to, where the murder that is at the heart of the story takes place.

7. A big financial deal that would involve damning the town's lifeblood, a pristine river.  It is a deal that would benefit the town's mayor and some outside big money interests but which some in the town, though they would be compensated for the loss of their land that would result from the deal, strongly oppose.

Do all of these elements, tropes, whatever you want to call them, sound familiar? Alone or in combination, everyone who likes mysteries has encountered them in series, books, movies countless times. And every single one of them, as I describe them here, make up the Belgian crime series The Break, whose first season (there are two), ten episodes, I recently finished watching. 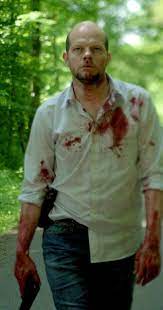 The Break is a textbook example of how to use the familiar to make something that works very well.  The setting doesn't hurt; the central village is in the forested Ardennes region of Belgium, which is gorgeous, yes, but also one, at least to me, that is a fresh setting for a crime story.

Police detective Yoann Peters has moved from Brussels to the Ardennes and his childhood hometown of Heiderfeld after something he did on a case in the city went terribly wrong.  There are actually two mysteries going on throughout the episodes.  One is the murder in the town, which Peters investigates with local police, and the other is what is going on in Peter's unreliable mind.  The psychological mystery portion unfolds through sessions Peter is having in a hospital with a state-mandated psychiatrist after the events of the small-town murder mystery have played out.  So there is a good bit going on and there are jumps back in forth in time, though everything unfolds with utter smoothness and clarity.

Episode one starts with a dead body found in the town's river.  I happen to be watching The Mare of Easttown right now as well, and so I couldn't but think of the Kate Winslet series when I saw this on The Break.  It even brought to mind Twin Peaks, which kicks off in a similar way.  And yet with The Break, for a change, unlike with so many of these type shows, we don't get the body of a dead young girl that's found but the body of a man, and that man happened to be a young black guy named Driss who had emigrated from Africa, Togo, to play soccer in Europe.  In Heiderfeld, where he was adapting to life as best he could, living alone in a rooming house run by an old Belgian guy (who has secrets we learn of), he had become one of the main players on the town's soccer club.

What develops is a wonderfully dark, sinuous mystery that uses the town as a kind of microcosm for Europe.  A number of pathologies lurk here, some historical, some social, some economic, some sexual, some related to race specifically, and as Peters investigates, he comes across and interrogates a number of people who could have been the ones, or one, who murdered Driss. We learn a lot about Driss in retrospect -- he comes fully alive in the flashback glimpses of him -- and when you see the scenes of him skyping back to his family home in Togo, telling his brother and mother how excited he is to have gotten to Europe to play soccer and to be able to send them back money, you will feel a wrenching sadness.  This series has a lot of tension and an emotional punch.  And that quite a few people in Heiderfeld know they did Driss wrong is beautifully conveyed by how almost all the episodes begin, with someone dreaming of Driss in a dream that turns into a nightmare.  A person came to their town to make a better life and somebody killed him and what happened to that person and what it says about their town haunts them. 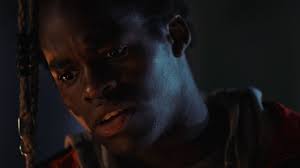 Last thing I'll say is that in terms of its mystery, The Break plays totally fair with viewers, presenting a culprit in the last episode who has been in plain view the entire time.  No last minute twists or unexpected unveilings occur here.

It's on Netflix, and I'm looking forward to Season 2.

Posted by scott adlerberg at 10:25 AM