King Kong, Godzilla, and the Immediate Move to Comedy 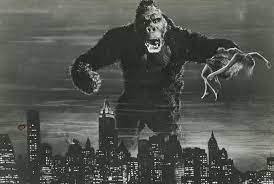 A few weeks ago, my college-age son and I watched the brand-new Godzilla vs. Kong movie. I liked it pretty well as it delivered exactly what I wanted: giant monsters fighting each other and destroying a bunch of buildings (that were evacuated the writers of the film made a point to mention). For my son, it was his first kaiju film, surprising considering he loves Japanese anime. This 2021 film made him decide to watch all/most of the earlier kaiju films. I happily obliged and we started all the way back in 1933.

The original King Kong movie is still a marvel of filmmaking. Considering it came a mere five years after sound was first introduced to the process, the special effects frankly still hold up well. My son likened Kong's movements to that of the Rankin and Bass Christmas TV shows.

We followed that up with Son of Kong, an instant sequel to the first film that was produced and released in the same year. 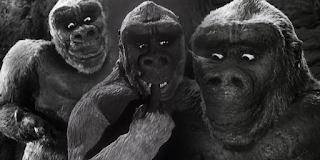 While King Kong was thrilling yet somber, Son of Kong was not. It was actually pretty basic until our hero humans landed back on Skull Island and found Kong's son. Then, it kind of kicked into a comedic vein. This being the first time I ever saw this movie, I was surprised by the funny turn. In the back of my mind were many of the Gozilla films of the 1960s and 1970s I remembered seeing as a kid, but I didn't think any of the Kong films had done that.

When it came time for Godzilla and with his love of anime, my son insisted we find the original 1954 movie in Japanese with sub-titles. He's a purist when it comes to subs vs. dubs. We found it and watched it. I'm sure I must have seen this movie--or the 1956 version with Raymond Burr edited into the movie--but I honestly can't remember it. 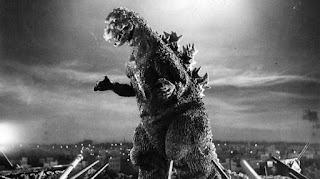 The 1954 original is even more somber than the 1933 King Kong movie. Godzilla is an obvious analogy to the atomic bombs dropped on Japan to compel them to end the fighting in World War II. The characters tracked the monster's movements like we do hurricanes. Most telling, they realize they have no power to stop him.

The moody tone surprised me, again with color films of the Sixties in my mind. I wondered when the funnier tone would be introduced into the franchise.

It didn't take long. The second movie, Godzilla Raids Again (1955), the tone was markedly lighter. The monster itself, especially when fighting Anguirus, another kaiju, kind of looked like it was dancing or trying to do martial arts. Where you almost could squint your eyes when watching the original and not think there was a man in a rubber suit, the second movie is all in on the man-in-suit concept. In fact, some of the filmed sequences were sped up, an accident during the filming that the director decided to keep in the finish film. It gave some of those moments a Three Stooges vibe.

It really surprised me. With the third film, King Kong vs. Godzilla (1962), that humor continued. Ditto when it came to the giant ape.

Which finally got me to my question: why? Why did the creators of Godzilla--and what he represented for the Japanese people--decide to make him funny? It's not too far into the franchise when Godzilla has a son (no mom?) so the giant lizard becomes a doting dad. 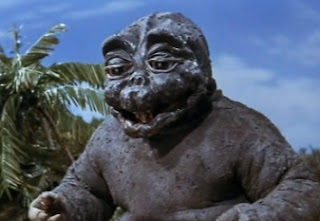 Seriously? Look, I loved these movies as a kid and I'll probably still enjoy them this year as we watch as many as possible, but why the move to lighten up the franchise? Was that where the money was? In family entertainment?

What other franchises can you think of that went lighter and funnier? Star Wars: Return of the Jedi comes to mind. James Bond has lots of it during the Roger Moore era. Say what you want about the Tim Burton Batman films, but compared to Batman Forever and Batman and Robin, those Burton films were really dark.

Are there any book series characters that underwent a comedic turn?