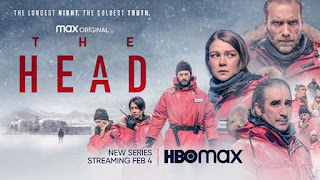 What do you get when you cross a mystery, a drama, and a survival story? The Head TV show.

Available on HBO Max, The Head was produced out of Spain yet is mostly in English. The only non-English language spoken is Danish by a handful of characters. It was pretty seamless so it’s not a stumbling block.

The story centers on a group of scientists in an Antarctic research facility. They’re on track to isolate a thing that’ll help combat climate change. The name of the base is Polaris VI. During the sunny part of the year, the base is brimming with people, but come the six-month dark times, only about a dozen stay behind. Let that sink in: six months of darkness in the inhospitable Antarctic winter. You couldn’t pay me enough money to do that. No. Way.

But these folks do. There is the ostensible leader, Arthur. The doctor, Maggie, is a newcomer to the group, living through her first winter. There are other veterans of the dark shift, many of whom worked in a previous base, Polaris V. One of those experienced people is Annika, the wife of Johan. She chooses to stay behind in Polaris VI while Johan, the summer commander, leaves. She doesn’t want Arthur to hog all the credit for their research because they are so close to victory.

You get a little poignant shot of the summer folks leaving the winter folks behind and then you jump six months ahead. Johan has returned, bringing with him the summer team. What he finds shocks the hell out of him. The base is deserted. The radio is out. There’s a dead body—Erik, the winter commander. What really gets to him is Annika. His wife is missing.

Johan has no way of knowing what’s going on until he stumbles upon Maggie hiding inside a kitchen cabinet, knife in hand, and clearly injured. With medical help, Maggie begins to recount the story of what happened during the dark six months in Polaris VI.

It ain’t pretty, but it comes across as a pretty gripping mystery. We get flashbacks from Johan’s point of view as we see his relationship with Annika and their desire to start a family but only after Annika has done her time down in Antarctica.

Via Maggie’s fractured recollections, Johan and his team must piece together what happened. Clues abound. Dead bodies, too. It’s only when another survivor of Polaris VI shows up that doubt is cast on Maggie’s tale. Is she a reliable narrator? Is she telling the truth or is she hiding something? What’s really difficult is knowing which characters are already dead in the present and, in Maggie’s flashbacks, you get to know them better. Makes the show all the more dire. And, with the dark winter outside, rather claustrophobic.

The mystery deepens and it held the attention of my wife and I pretty well. The acting is good, with Johan (Alexandre Willaume) saying a lot with just his facial features. Katharine O’Donnelly as Maggie does a fine job simultaneously stoking your suspicion and empathy for her. There are a few times when Arthur (John Lynch) gets angry and, my goodness, does he do angry well.

Now, as to the ending, my wife guessed it. I thought about her prediction and I agreed with her it was mostly likely the real reason. Turned out to be accurate. You might guess it, too, but that doesn’t detract from a well-done television show. At only six episodes, you can knock out this intriguing show in less than a week.