The Return of Rudolph Fisher

What excellent news it was last month when a brand new edition of Rudolph Fisher's 1932 mystery novel, The Conjure-Man Dies, came out.  Set in Harlem, it is, of course, the first non-serialized full-fledged detective novel ever published by an African-American, a novel with nary a white character in it, and it's both a very entertaining mystery story and a rich witty look at its time and place. I won't go into detail about it now because I wrote a piece about it a few years ago for the Los Angeles Review of Books -- a piece you can find here, https://lareviewofbooks.org/article/elementary-dear-harlem-on-the-first-african-american-detective-novel/, if you're interested.  I will say that if you haven't read Fisher's only mystery novel, you're in for a real treat if you pick it up.  The Conjure-Man Dies holds up extremely well today, a mixture of Agatha Christie and Dorothy Sayers style plotting with hardboiled, as in Dashiell Hammett-like, realism.  Social observation and commentary are fully embedded in the characters and the story.  And it's loaded with humor; as Langston Hughes said of Fisher (in the language of the time clearly) Fisher was the "wittiest of these New Negroes of Harlem.  [He] always frightened me a little because he could think of the most incisive clever things to say, and I could never think of anything to answer."  There is much to chew on in The Conjure-Man Dies, but Fisher almost always delivers even serious points lightly. 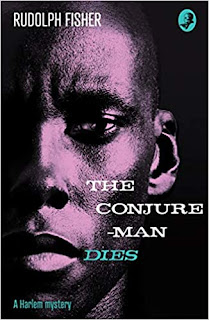 This new edition comes with an introduction by mystery writer Stanley Ellin, and these five or so pages are themselves interesting to read.  Written for a 1971 edition of the novel, Ellin's comments are surprisingly bare-knuckled.  Commenting on the way Fisher's novel stood out and broke new ground when written, Ellin says, "The mystery novel of that day, where it dealt with Black people at all, played both angles.  They were either servitors or hardboiled crap shooters, take it or leave it.  Hardly surprising when one considers that, first, the mystery novel is popular fiction, and popular fiction tends to cater to popular prejudices, and second, that the genre itself had, by and large, used as its subjects the White Anglo-Saxon Protestant middle and upper classes, always acknowledging their superiority to the non-WASP world without question."
Ellin says a bit more along these lines, his tartness refreshing.
As an added bonus, this edition also has the one other work, besides The Conjure-Man Dies, featuring Fisher's NYPD detective Perry Dart and his friend, Dr. John Archer. It's a 45-page short story called "John Archer's Nose," published in a magazine a month after Archer died, at age 37, in 1934.  The story involves a killing in a Harlem apartment building that the two investigate, and while following the rules of a Golden Age mystery to the letter -- a limited setting with a small cast of suspects and a touch of the improbable about the crime -- skillfully touches on a theme Fisher delves into deeply in his mystery novel:  that is, the tension that exists in people between rationality and superstition,  It's a tension that existed in the Harlem he knew, and well, seems to still be around now, and not only in Harlem.  It's worth noting that Fisher himself was a doctor by profession and placed a high value on reason and science, though not in a way anyone would call doctrainaire.
Gotta give credit where credit is due and thank the publisher, the Collins Crime Club, for putting this new edition out.
.
Posted by scott adlerberg at 10:21 AM