Year 5 of an Indie Writer, Week 17 AKA The One With Video

Well, I'm trying something different this week. I'll let you see for yourself.

This week, Beau Johnson checks out some Hector Acosta.
Fifteen-year old Spencer loves professional wrestling. It’s the reason why he, along with his older brother Billy, started their very own wrestling promotion in their Dallas apartment complex. The fact it puts Spencer closer to Tori, Billy’s girlfriend and the only girl either boy knows who can take a chair shot to the head, doesn’t hurt.
It isn’t long before RBWL—The Royal Brooks Wrestling League—have a rival in Woodland Terrace, a nearby apartment complex with their own wrestling promotion run by Eddie Tornado, an unhinged teenager with a connection to Tori and a hard-on to see Spencer and Billy fail.
When Spencer breaks into Eddie’s home and steals a gym bag he believes holds Woodland Terrace’s championship belt, the feud between teenagers and promotions escalates. Before long, Spencer will find the world of professional wrestling can be more real and dangerous than anything seen on television. 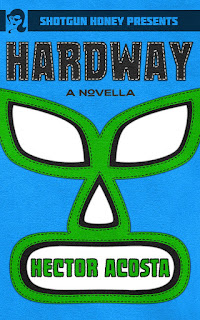 Posted by Steve Weddle at 10:29 AM No comments: Links to this post

Well this is weird, isn’t it?

For some authors, being locked at home is a thing we dream of. All that time to write and scheme. But a few weeks in a few of my mates and I started to get itchy. We wanted to meet up, laugh, tell stories, tell stories about stories. Maybe have a few drinks. But we couldn’t. So – instead – we set up a YouTube channel. A place where we can post our stories, hang out virtually. Do something creative with all this time.

We’re all published by Fahrenheit press, and realised that the crisis was impacting us all in different ways. Personally, mentally, and creatively. And so we decided to get together and create something. Cos that’s what creatives do. On FahreNoirAtTheBar you’re going to find some amazing authors reading excerpts from their books. Or talking about the stories behind the books.

The best way to ensure you don’t miss out is to head over there now and subscribe.

Anyway, the ‘viewing figures’ have been really encouraging, the comments uniformly positive, and the collegiate, supportive and kind way that so many writers have come together to make it happen; the enthusiasm with which they have filmed and uploaded their clips. These things are slivers of pure, sparkling glitter in the night.

It’s early days yet. We have amazing ideas for what comes next. Of course we have: Did I mention we’re creatives? We also (luckily) have some amazingly smart experienced heads who have cautioned us against barrelling into madness, and so we’re going to slowly and steadily expand the site.

Thankfully, some of my crazier ideas have been supportively but definitively taken out the back and given one in the head by my colleagues in our loose revolutionary collective (think The Committee of Public Safety, only with fewer powdered wigs, and better personal hygiene. I think. I mean, they’re all on Zoom and YouTube, so they could be HONKING for all I know…)

We may all be locked inside, but our books are still out there.

They’re still for sale from Amazon or – even better – directly from Fahrenheit-press.com, who are still delivering beautifully gift-wrapped books.

They’re in ebook if you want an immediate hit.

They’re in paperback if you like the physical <and who – in these times – doesn’t freakin’ LONG for a bit of the old physical>, with the added bonus that – if you order the paperback straight from fahrenheit-press.com you’ll get an email with the download link for the ebook so you can start reading while you wait.

At least one of mine is in deluxe limited edition numbered hardback (if it hasn’t sold out) which comes with a unique forward I wrote about the impact this novel had on my life.

One of my dumbest housebound purchases – after I’d gone online in the early days to discover that tinned goods were going for more, per gram, than Peruvian flake in the week before New York Fashion week – was four hundred quid’s worth of Gin. I cancelled the order, mostly cos I don’t think I have the space to store four large one’s worth of gin, but also because – really? Me and a truckful of gin? How will that end well?

But books? Oh books are still eminently purchasable, consumable. Eminently right; for where else – when you are confined to your home – can you hang out at a dive bar in Borough, or drink in the casino on a reservation, or be in the middle of the Balkans, or in the mind of a serial killer, or in a car en route to Vegas for a quickie divorce?

Read them. Buy them. Immerse yourself in them.

Stay home, stay well, stay sane, and know – always – that you are loved.

Derek Farrell is the author of ‘Death of a Diva’ ‘Death of a Nobody,’ ‘Death of a Devil’ ‘Death of an Angel,’ and the novella "Death of a Sinner," all published by Fahrenheit Press.
The books have been described as “Like The Thin Man meets Will & Grace.” “Like M.C. Beaton on MDMA,” and – by no less an expert than Eric Idle – as “Quite Fun.”

He’s married to the most English man on the planet and lives in West Sussex. They have no goats chickens children or pets, but they do have every Kylie Minogue record ever made.
Posted by Derek Farrell at 8:00 AM No comments: Links to this post

Nobody who loves books needs to be told that this is a perilous time for indie bookstores.  Over the past few years, despite the behemoth called Amazon (which, yes, I order books and ebooks from often enough), indie bookstores were mounting an impressive comeback, and there seemed no reason why this development would not continue -- until the pandemic hit.  Now, who knows how many of these great shops, which cater to their local reading communities, will go under?

Anyway, a friend of mine posted a link on social media the other day I thought worth sharing here.  It comes from a short article by the McSweeney's editors, and it's called "Ways to Help Independent Booksellers and Bookstores".  It's not that anything listed in the article is shockingly inventive or surprising, but it's still good to keep in mind the basic things one can do to help indie booksellers. 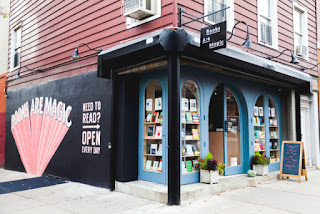 Here's the link, with some good suggestions and information on how to help the indie bookstores stay afloat through this hazardous period:
https://www.mcsweeneys.net/articles/ways-to-help-independent-bookstores-and-booksellers.

By the way, number eight of the nine things listed in the article -- "Take part in virtual book events to support authors and stores." -- is something the crime fiction world is already doing, with virtual Noir at the Bars having taken place.

We gotta keep these places we love alive!

Well, that's it for this week.

Back to reading, movies, writing, working on my cooking...
Posted by scott adlerberg at 3:00 AM No comments: Links to this post

The Exquisite Corpse: Lockdown Noir finished up yesterday, and today we have a treat.

You can now download the entire story -- and learn who wrote which chapter -- below:

By the way, rumor has it that volume two is already in the planning. 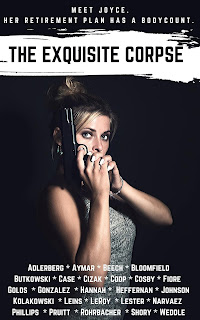 Posted by Steve Weddle at 12:43 PM No comments: Links to this post