If I Could Only Write That Book...

Take all the writing classes you want, read all the books on writing, use whatever fiction writing software -- nothing teaches you more about writing fiction than reading other fiction.  And broadly speaking, when it comes to novels in particular, I would say there are two types of books you read and enjoy, the books you love but know you could never write and the books you love but feel just possibly, conceivably, you at your best imaginable self, a writing self that's elevated but realistic, that encompasses your talents and limits, you could perhaps write.

I don't remember who wrote it, but I remember reading years ago a piece by a writer who said that when he was younger he felt that a novelist to shoot for in terms of quality and achievement, someone he felt could be within his range, was the American writer Nathaniel West.  He was talking specifically about West's two best works, Miss Lonelyhearts and The Day of the Locust.  As this writer saw it, you had with West someone whose lasting literary stature no writer would reject as beneath them.  At the same time, the two books, both short, didn't feel to him like books on a level utterly beyond his capacity to create.  Maybe even here he was being optimistic, but I took his point as a good one.  Great as it is, The Day of the Locust is a dark, biting, satirical work that one could see using as a model for something you might write, but you'd be unlikely to think the same thing of, say, Thomas Pynchon's Gravity's Rainbow.  That's not to say that if you set out to write a dark, biting, satirical work you'd produce a book on the same level as West's book (odds are extremely strong you won't), but I don't think it would be delusional to use West as a level to shoot for, whereas with Pynchon, in all honesty, it would be.

One could fill in whatever writers one chooses in this model, and I think the idea applies.  In my case, after many years of writing, I know that I will never write a long book, so anything beyond a certain length is a book I can love and learn a lot from but not one I could hope to approach.  But it's not only about length.  It's also about language.  Take two of my all-time favorite novels: Jean Rhys' Wide Sargasso Sea is less than 200 pages, as is Djuna Barnes' Nightwood.  Now I know I'll never write a book as great as either of these two books, but one at least seems like a book I can hold within my sights as an ideal to shoot for when I write a book, and that Rhys' novel.  Her book is fierce and intense and it's brilliantly written, but it uses very simple language.  Most of the words in the book are one and two-syllable words.  You read it and feel that damn, damn, if I could just get that much better, I myself could write a book somewhat close to this one -- maybe.  Barnes on the other hand, with her dense, ornate style, her sheer linguistic inventiveness, forget it.  I would never even think of trying to write anything like Nightwood. 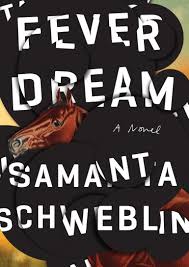 I just finished a book that for me falls somewhere between the two poles I've described, and however I look at it, I do consider it a hypnotic and unputdownable read, and that's Samanta Schweblin's Fever Dream, published in Argentina in 2014 but translated in the US in 2017.  I read it as the last of my October horror reading, a one-sitting, three-hour read of its 183 pages.  It's a book, like Rhys', that uses the simplest of language to get across the most intense and unsettling effects, but in how it's designed, as a sort of strange and elliptical conversation between a young woman lying gravely ill in a clinic and boy sitting beside her who is not her son but has an intimate connection to her (I'm being purposely vague here), you get a complicated but accessible story that will scare the hell out of you.  It has to do with trauma, toxins in a ravaged environment, damage done to human souls and bodies, and maternal (or parental in general) anxiety. The original Spanish title, Distancia de rescate, translates as "Rescue Distance", which in the story refers to the ever present distance a mother is aware of in relation to her child and the possible dangers that could strike her child. How quickly could the mother cover that distance to her child if danger struck?  And if she could cover it, would that change anything?  Would she be able to "save" her child from the danger?  I can't recall the last book I read that created such a sense of unease in me, and that unease only increases as you turn the pages because the book, very easy to read, has no pauses of any kind. It has no chapter breaks, no asterisks breaking up passages. It really does read like a fever dream, a seamless nightmare that does not let you go.

So is this book one to put on the side of "love it but I know it's beyond the reach of my abilities" or "love it and it's one to add to the list of those I can use as a model to strive for"?  As I said, it's somewhere in between, but I do know it's exactly the sort of book, short, eerie, spare, unceasingly suspenseful, a book that doesn't quite read like any other book, that I dream of writing.

What can one do?  Only the obvious: keep trying.

Posted by scott adlerberg at 11:05 AM