Who is E.A. Barres and what has he done with Ed Aymar? 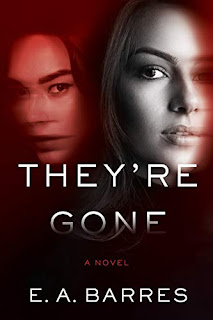 E.A. Barres has a new thriller coming out November 10. Are you ready?
ABOUT THEY’RE GONE

In this intense and edgy tale, two very different men are murdered. In the same fashion and on the same night. Soon after the shocking murders their desperate widows must discover how the men were connected and why they were killed before a similar fate befalls what remains of their families.

One of my favorite writers working today, Barres builds deep and thoughtful characters organically and emotionally, all while playing up the gritty, furious pace. This dark novel is filled with greed, corruption, brutality, and shades of dark humor. A matrix perfectly suited to Ed’s talent and personality.

THE INSPIRATION BEHIND THE BOOK

Some might find it hard to believe that a writer with such a turn for the brutal is actually kind, thoughtful, and one of the most inspiring and helpful people in the writing industry. So, how did this lovely man come up with such an unrelenting and vicious novel.

“I've been writing toward They're Gone for a while now. My work has always had a vigilante streak through it, and female characters who, in some way, have been done wrong. The idea of a dual female narrative, featuring women in response to the men around them, and then subverting that control, was a natural but unplanned progression.

WHAT FELLOOW WRITERS ARE SAYING ABOUT THEY’RE GONE

"As much as it pains me to admit it Ed Aymar (E.A. Barres) is one of the most insightful and nuanced writers working today and he fearlessly steps outside his comfort zone on a regular basis. He is constantly challenging himself and his readers.”
Author S. A. Cosby won the 2019 Anthony Award for Best Short Story "The Grass Beneath My Feet", and his previous books include BROTHERHOOD OF THE BLADE, MY DARKEST PRAYER, and the recent and highly acclaimed BLACKTOP WASTELAND.

“I was glad to receive an early copy of this book, and I was riveted from page one. This novel is filled with all my favorite things: diverse characters, strong women, interesting insights into domestic relationships and the complexities of grief. And I particularly love this author’s brand of crime fiction: gritty, darkly humorous, sensitive, and sprinkled with violence where necessary.

In his new novel, E.A. Barres masterfully weaves together the stories of two very different women and their burning desire to learn the truth about their murdered husbands. They’re Gone is about secrets and marriage, betrayal and grief, and will leave you questioning whether you can ever really know someone. A stunning, dark, evocative thriller.”

Jennifer Hillier, author of six novels, including JAR OF HEARTS, which won the Thriller Award, and was shortlisted for the Anthony and Macavity Awards. Minotaur Books released her newest psychological thriller, LITTLE SECRETS, in April of this year.

"Ed has a way of bringing people together. We met at a book signing and shortly afterwards he invited me to read at my first Noir at the Bar event, where I met you! Ed is very supportive of other writers and has a knack for highlighting the talents of others, women in particular."

Shawn Reilly Simmons is the author of the Red-Carpet Catering Mysteries. Shawn is on the Board of Malice Domestic, is a member of Sisters in Crime, International Thriller Writers, the Crime Writers' Association, and Mystery Writers of America. An accomplished short story writer, she’s won an Agatha for “The Last Word.” Shawn is also an editor at Level Best Books, publishing crime fiction anthologies and novels.

“The thing I love most about Ed Aymar’s (E.A. Barres) writing is his voice. While a lot of folks are good at making a reader unable to look away from a train wreck of a situation unfolding on the page, Ed has a knack for making you glad he brought you along for the ride. It only takes a page or two for me to be hooked into whatever story he’s telling, and in five I care about the characters so much I have to see how it turns out. That kind of talent can only come from a guy with a huge heart—and anyone who’s lucky enough to call Ed a friend will tell you he has one of the kindest hearts in publishing. I can’t wait to dig in to this new novel.”

E.A. Barres/E.A. Aymar's newest novel, THEY'RE GONE, will be published in November 2020. His other books include THE UNREPENTANT, and he co-edited and contributed to THE SWAMP KILLERS and THE NIGHT OF THE FLOOD.
Posted by Marietta Miles at 8:06 AM

That's a lot of high (and well deserved) praise. Can't wait to read the latest.