What was the most dangerous amusement park ever?  Among them certainly has to be Action Park, in Vernon New Jersey, open from 1978 to 1996, and what went on there, in all its crazy 1980s glory, is captured in the documentary Class Action Park, now showing on HBO Max. 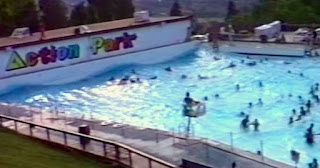 It's certain that six people died as a result of going on rides at Action Park.  The overall number of injuries suffered, serious and less so, was countless.  And yet, of course, the danger was a part of the park's allure, and the movie tells the story of the park's history and popularity, with many who worked there and went on its attractions remembering what things were like.  Action Park was an experience shared that those who partook of it will never forget, like, well, a war.  A war that was fun and that you're fortunate enough to have survived.  For the first hour, the story told is mainly amusing to hilarious, and then about an hour in, the tone darkens, as the mother of the park's first fatality victim tells how her son died at the park and how the park's owner --  quite a character himself -- lied to the press and public about the incident.

I don't want to give all the great anecdotes in the film away.  But let's just say that the thinking behind Action Park was to have a place that essentially had no (or very few) rules.  Teenagers, some underage and most with no training, comprised the staff; drinking was rampant; safety definitely not a priority.  Everything you did at the park you did at your own very high risk, and as it turned out, the park operated without any liability insurance so that if you were hurt, you really didn't have much legal recourse.

Where the film perhaps is most interesting is how it gets at how childhood was so different back during this time.  I grew up primarily in the 70s, just before the heyday of Action Park, but if I wanted to show one film to my own 15-year-old to give him a quick encapsulated version of what a certain type of childhood was like back in those decades, I might just show him Class Action Park.  It perfectly captures a period that is perhaps the last of its kind. It is a period when as a kid a large portion of your life happened without your parents knowing anything about what you were doing.  Your parents could be entirely loving, and yet supervision was often...lax.  This is something I talk about with friends of mine from childhood, how great it was not to have the kind of constant parental involvement kids (including my own) get now.  How much fun you could have on your own.  Outside the house, you didn't need your parents for much of anything. Just show up for dinner, eat your meals, wash, sleep, do your schoolwork, and more or less, everything is fine.  And yet, even if it were possible nowadays (which it isn't), would you want your kids to grow up in the way kids did in the 70s and 80s?

As another says of this time: if you ask people who went to Action Park, "Do you think the way you grew up was healthy for a kid, they'll say 'no'.  We laugh about it cause what else are we going to do, but we don't think it was healthy...You were swimming in pools where the lifeguards didn't pay attention. You were going on rides where people got hurt all the time.  And we felt like we were on our own. We felt like the world was an unsafe place. But it's what we got, so fuck you."

Class Action Park is very entertaining and makes you think about the double-edged quality of nostalgia. 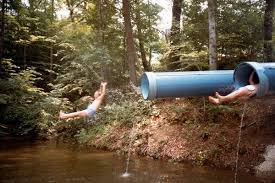 Posted by scott adlerberg at 8:22 AM