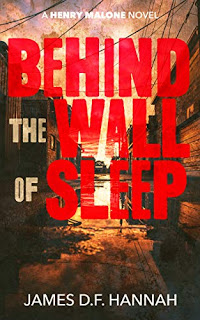 I read Jeff Pierce’s wonderful blog, The Rap Sheet, everyday. Y’all read that, don’t you? I mean, he’s nothing less that one of the most comprehensive sources of the goings on in the crime fiction world. His site should definitely be on your daily reading list.

On Thursday, he posted the winners of the 2020 Shamus Awards. They are sponsored by the Private Eye Writers of America, a group started by prolific author Robert J. Randisi way back in 1981.

I always enjoy awards season when finalists and winners are announced because it gives me new books to add to the never-ending TBR pile. On Jeff’s post, he also lists the publishers of the books.

In the Best Original Private Eye Paperback category, the winning book is BEHIND THE WALL OF SLEEP, by James D.F. Hannah. I know the author and now he gets to put Shamus Award winning author behind his name. This is a great win for Hannah, but what I zeroed in on was the listed publisher: Self-published.

I sent a text to Hannah and asked the question: to the best of your knowledge, are you first indie writer to win a major award? The answer was a resounding yes.

I ended up peppering him last night with a few more questions.

He has a day job. He works in government, public relations department. BEHIND THE WALL OF SLEEP is the fifth novel in his Henry Malone series. He has a spiffy cover and I asked him if he hired a designer. Actually, with his design background in the newspaper business, he created the cover himself. He quickly said it wasn’t something he’d recommend for most folks.

James D. F. Hannah is a pen name. His real name is pretty much out in the world. About the pen name, he wrote this: “The pen name came around because I’ve always jokingly said that I never wanted to see my name attached to a one-star review on Amazon.” If you glance at his Amazon author page, you’ll see he’s in no danger of any one-star review. But, he continued, his pen name contains his children’s names. As a dad, I love this.

Finally, I asked the big question: why indie?

I wasn’t sure I could find a publisher interested in publishing what’s hoped were these funny redneck PI novels. Also, I wanted to be able to tell the stories the way I wanted to do it. Now do I necessarily think it was the best way to go? Probably not. But I’ve gotten to write these books and stay true to my own voice. That’s not to say I wouldn’t go with a publisher and adapt because I would. End of day, it’s always about getting to tell the story, and hoping others will like them.

While he is in the process of redoing his website, he is quite active on Twitter (@JamesDFHannah).
Congratulations to James for the award! Keep that indie banner flying.
Posted by Scott D. Parker at 1:00 AM

It speaks worlds of PWA that is does not discriminate between indoes and major publishers. Good writing is good writing, wherever it comes from.