Of Course It's Palm Beach County

By Claire Booth
Palm Beach County, Florida is back in the news —and not for its beautiful beaches or its business or even its baseball spring training camps. No, it’s in the news because it’s crazy. Again.
A county commission meeting on Tuesday went viral after a series of speakers protested the commission’s decision to make face masks mandatory. Some were calm and reasoned. Some were the opposite. Name-checked by the second group at various points were: God, the devil, 5G technology, Bill Gates, the Constitution, psych wards, pedophiles, and high school drama queens. (I was hope someone would give a shout-out to alligators. No such luck.)
I used to work and live in Palm Beach County. My first job after college was reporting for the newspaper in Boca Raton. Yes, that Boca. It’s the southernmost city in Palm Beach County, on the state’s Atlantic Coast about an hour north of Miami. The county stretches from the ocean beaches east to the edge of the Everglades and the shore of Lake Okeechobee. It has rural poverty and one of the richest and most exclusive enclaves in the world.
And man, was it a great place for news. The crime was weird and the politics were weirder. It just seems to be a nexus for the bizarre.

I covered a contract killing attempt with a high-powered rifle at a busy intersection; accusations of matzo price gouging; and the theft of one of the Aston Martin DB5 sports cars used in the James Bond movie Goldfinger (the guns did come up out of the fenders but weren’t operational).

I sat in a city council meeting and listened to the mayor tell a property developer that she was sick of pink buildings (“Boca pink” is very much a thing), and she’d be much more inclined to vote for his proposal if he agreed to paint it a different color. The developer, not stupid, immediately agreed. I listened to heated meetings about airport expansion, crosswalk placement, and traffic problems caused by Snowbirds, the New Yorkers who spend their winters in Florida.
I covered an encephalitis scare out on the fringes of the Everglades where people couldn’t avoid the mosquitoes because they lived in mobile homes with no air conditioning and wide open windows. I met a tuxedoed Roger Moore while writing a story on an international film festival held at a (pink) luxury resort.
And I covered the race for county sheriff and various events throughout the county, including one in Palm Beach. That Palm Beach. The Town of Palm Beach sits across the Intracoastal Waterway from the city of West Palm Beach. It’s a strip of land bordered by the Waterway on one side and the Atlantic on the other. It’s no more than three-quarters of a mile at its widest point. This is pertinent, trust me. At this candidate forum, a man in a cravat (I am not making this up) asked the candidates at a sheriff’s campaign forum if the town could issue IDs to domestic workers so it could let only them over the bridge and into town, instead of having to allow everybody in. (The candidates, stuttering in dismay, explained that no, that wasn’t possible—seeing as all the roadways in the Town of Palm Beach are public and open to everyone.) 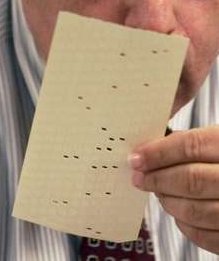 I left there in the late 1990s, before the weird that had just been local burst onto the national stage. Perhaps you remember hanging chads? Those were the pesky messed-up ballots in what became the critical county in the critical state during the 2000 presidential election. No one I’ve ever spoken with who lived or worked there was surprised that such absurdity came out of Palm Beach County.
As for this anti-mask blowup, I’m sadly sure this is happening all over the country. Palm Beach County certainly isn’t the only place where some residents don’t believe in science. But it was the one that went viral. Because no place has that touch of crazy fairy dust like Palm Beach County does.
Further weird resources, highly recommended:
Weird Florida and Weird Florida II: A State of Shock, both by journalist Eliot Kleinberg.
The @FloridaMan_ Twitter account, with as always the request that readers check out the source material for accuracy.
Posted by Claire Booth at 3:00 AM