The Convention That Wasn't 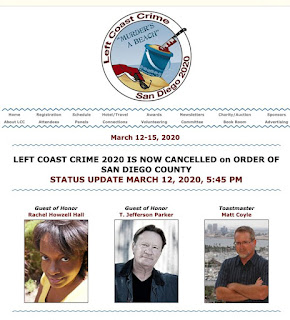 By Claire Booth
The coronavirus caught up with me in San Diego. I—and several hundred others—hoped to outrun it, at least for the weekend. But it wasn’t to be.
Left Coast Crime is a four-day convention for crime fiction fans that’s held every spring at different locations throughout the West. This year, it was in San Diego. And it lasted eight hours.
The county health department shut us down Thursday evening, like we were a restaurant with food violations. No grace period. No opportunity to squeeze in another day of panels. We were just done.
And everyone was okay with it. Disappointed, sure. But the prevailing feeling seemed to be a sort of calm resignation mixed with a dose of last hurrah.
* * *
Let me go back to the beginning. My flight from Sacramento to San Diego on Wednesday was more than 80 percent full, much more than I’d expected. No one was wearing face masks, but the smell of hand sanitizer was definitely in the air. And the Southwest flight attendants had started a new sweep, collecting used disinfectant wipes before takeoff—after passengers had scrubbed their seat arms and tray tables.
Once in San Diego, I honed my social distancing skills. It was tough, because this is a community that hugs. A lot. Whether reader or writer, we only see each other a few times a year and dammit, we hug. So this week there was a lot of awkward freezing with arms extended as people stopped themselves from the banned gesture and switched to an approved greeting. The elbow bump was the most popular. Also used were the hip bump, the disco dance move, and jazz hands. Feel free to incorporate any of these into your own social distance repertoire. It might liven things up when we all need it most.
I lucked into a wonderful dinner Wednesday night with several Sacramento friends and Jane Ubell-Meyer, who found us a fabulous little Italian restaurant. I went to my room early because my Thursday was full of activities. I didn’t know then how fortunate that would turn out to be.
Thursday started at the civilized hour of 9 a.m. with Author Speed Dating. This is the best thing going if you’re a writer. You partner with another author and each get two minutes to talk about your books to a table of 10 readers. Then you hop up and move to the next table. We did it 18 times. The room was mostly full, and let me tell you, these are serious readers. They carefully collect author giveaway bookmarks, they take notes, and they’re wonderfully encouraging. I always leave this event with a hoarse voice and a buoyed spirit.
A good portion of the people who planned to attend had to cancel, for health or family reasons, which was completely understandable. It did take the panel scheduling to a whole new level of difficulty; some people were suddenly the lone panelist and switched to other topics with little prep time. But no one minded at all. People chatted while they looked for the new locations and enthusiastically participated in the Q&A sessions.
My panel assignment—Murder in a Small Town: Adding Small Community Flavor to Crime Fiction—was Thursday afternoon. And thanks to moderator Elena Taylor, it was fantastic. A moderator can make or break a panel discussion, and Elena took ours to new heights. She was funny and charming and asked questions that sparked a great conversation. 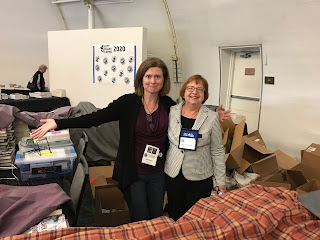 Afterward, we all headed to the room where books are sold and tables are set up for authors to sign. And we found this:
Mysterious Galaxy, the San Diego independent bookstore that was the sole vendor for most authors’ books, had left their stock and fled. Nobody could buy anything, and the mechanism the bookstore set up to sell to attendees left out the most important part. A book shipped later through media mail isn’t signed. That’s one of the major points of a convention like this. Readers get to interact with authors and get their books signed. Both groups in that last sentence braved the virus situation to be there. Having one person from the store do the same would have been nice. 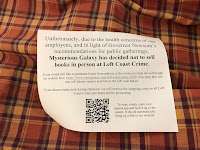 It was especially heartbreaking to peek under the blankets and see stacks of books from the conference’s guests of honor—Rachel Howzell Hall, T. Jefferson Parker and Matt Coyle. In a normal year, the GOHs each get a special interview session in front of an audience and make a speech during the awards dinner. It’s a big deal, especially this year for Left Coast Crime’s 30th anniversary. Only Matt’s interview made it before the shutdown; no one else got anything. To not even be able to sell some books before the whole thing ended was horrible.*
As Thursday progressed, I noticed that the feeling of the convention became more and more tense. No one was edgy with one another; it was more like everyone was just waiting for the hammer to come down. And when it did, everything relaxed. It’s canceled, there’s nothing anyone can do about it, we might as well end it with the maximum amount of enjoyment.
So naturally, we headed for the bar.
* * *
I was able to change my flight to Friday and was home by that evening. And I’m still glad I went. I got to see friends, meet readers, and watch humanity confront a pandemic with grace and kindness. It wasn’t a bad way to spend two days.
Be well, everyone. 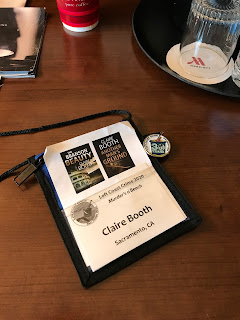 *A side note: two other bookstores, Cross Genre Books and LaPlaya Books both stuck around. These mostly used bookstores had huge costs to be there but didn’t end up with much business in the eight hours the convention was open. Please consider buying online from these bookstores. They supported crime fiction; let’s support them.
**A huge thank you to the organizers of this year's LCC, who worked even harder than most years to put on this convention. Here are just a few of them: Lisa Brackmann and Kim Keeline, Tammy Kaehler, Kathy Krevat, Christine Van Such, Janet Rudolph, and as always, Lucinda Surber and Stan Ulrich.
Posted by Claire Booth at 3:00 AM