The Best Go-Kart Ever 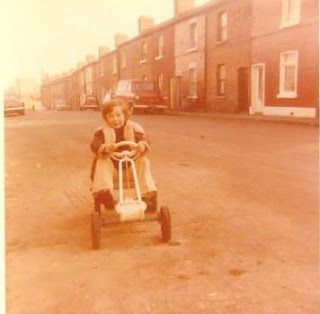 It’s that time of year when I think back o the best Christmas gifts I ever got.

This is me, in the late seventies. Re-enacting a scene from “Whatever happened to Baby Jane?” with my father as I drove the Go-Kart I’d gotten for Christmas at him,

Noticeable is the open doors of some of the houses; nobody locked their doors then. Also the almost total absence of cars. I count three, and the sort of red van that was almost invariably used for bank job getaways in British Crime Shows on TV. My dad still lives in the same house, in Dublin, a city that has redefined the phrase upwardly mobile, and faced the terrifying hangover of hubris, but which still, when I return nowadays, finds the entire street seemingly double parked with luxury drives.

I loved that go-kart, and would give the other kids rides – them standing on the rear axle and hanging off the back of the seat. Until the seat snapped off, and the axle started buckling, at which point I was heartbroken.

I guess I should have learned that sometimes, even if it runs the risk of losing you friends, you need to learn to say “No,” before your heart is broken. It would be many more years before I learned that lesson.

But my dad fixed the axle. I think a mallet may have been involved, but since perfectly precise three point turns weren’t the most common manoeuvre in it, the fact that the kart steered “A bit bockety” was never an issue; the lack of a seat, however, was potentially huge, until my dad made a four-sided box from chipboard, lined it with red shag pile carpet (taken, I’m told, from a patch of my bedroom carpet over which he then built a bookcase to hide the gap), and screwed it to the frame, and I had an instant couture kart.

And the fact that I just used the phrase couture kart probably explains why I never had many friends as a kid growing up on the not-so mean (but car-less) streets of south Dublin in the 1970’s.

Derek Farrell was raised in Dublin (no shit, Sherlock) and lives, now, in London where he writes The Danny Bird Mysteries, “Death of a Diva,” “Death of a Nobody,” “Death of a Devil,”and  “Death of an Angel” can all be purchased from the usual e-stores or directly from the publisher here The fifth, “Come to Dust,” is available exclusively as a free download from his website derekfarrell.co.uk . The sixth – Death of a Sinner – is a Fahrenheit69 Tete Beche Novella and is published in a joint edition with Jo Perry’s “Everything Happens.” It can be purchased here.