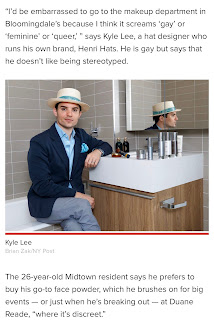 Look at this charmer, sitting there in his straw hat, amidst the taupe-tiled spotlit minimalist bathroom of his graciously appointed midtown apartment and displaying his collection of male cosmetics.

Kyle Lee (for it is he) popped up on my Twitter feed this week, on what happened to be International Men’s Day.

Now, I need to be clear here: He – and his odious little quote – popped up on my Twitter feed. And I got angry. I rarely get angry on or about something I see on Twitter these days, and I try very very hard (and of late pretty successfully) to avoid becoming part of any of the Twitter torch-wielding outrage mobs.

But as I sat reading how Kyle – in an article with the New York Post about the increasing market for male cosmetics – commented that he would “be embarrassed to go to the makeup department in Bloomingdale’s because [he]  think(s) it screams ‘gay’ or ‘feminine’” – I got angry and I allowed my righteous anger to encase me like a tea-tree and geranium-scented seaweed body wrap.

Kyle, the article proceeds to announce, is “a hat designer who runs his own brand, He is gay but says that he doesn’t like being stereotyped”.

And to that – while still angry, and before I’d had a chance for a more considered response – my only reaction was: “Stereotyped? Afraid of being Stereotyped? GURL, I KNOW YOU’VE GOT A MIRROR. TAKE A LOOK IN IT COS YOU ARE FAR LESS CHARLES INGALLS THAN YOU ARE NELLIE OLSEN!”

Then I realised that (a) I was being vitriolic and (b) most people won’t get my Little House on the Prairie references, because most people weren’t stuck indoors watching reruns of the show from the ages of six to sixteen because going outside meant there was a good chance someone would spit at you, throw something at you, ignore you, laugh at you or just call you a Pansy with the tone of disgust that, to this day, makes my stomach clench with a mixture of anxiety and fear.

And you know what else that tone used to cause in me? A wave of self loathing.

And that, quite frankly – that self-loathing – is evident in Kyle’s comment. He thinks being ‘gay’ or ‘feminine’ is something to be ashamed of. Because the world has told him, since he was a little boy playing Milliner while the other boys were playing fireman, that ‘that’s a girl’s job’ or ‘those are girls’ toys’ and he’s – despite the fact that he claims to be an out Homosexual (though the words ‘and proud’ are oddly missing from his description in the piece) – still, deep inside himself, is aware that he’s, at best, silly, and at worst, disgusting.

And that – once I got over the anger that someone who looks like the Mayor of Gaytown could actually say something so stupid – made me quite sad.

It was international Men’s Day, a day when we were encouraged to consider what it means to be a man, and to reflect on both the positive elements of being a man and the negative. But I found myself thinking about what it means to be ‘feminine,’ and why that would be perceived by someone like dear Kyle as something unpalatable.

Cos we all know this isn’t just men. Girls, too, are constantly shoehorned into preconceived notions of what it means to be a girl or to be feminine. Like baking and pink unicorns, you’re a little princess. Express an interest in wearing boots and growing up to be a vulcanologist, you’re… less so. But whilst society has expended a fair degree of energy on trying to address this gender stereotyping where girls are concerned, there’s still a message sent to boys that to be anything other than a rufty tufty manboy is a cause for concern.

In my life, I have had female role models who went out to work for their families and brought home a wage; who fought like lionesses for their pride and for what was right. My father was a stay-at-home parent for many years, making breakfast lunch and dinners for my brother, mother and I, and who took the time to sit with me and do my homework. They were people in an economic situation that forced them both to take on roles that neither had expected they would when they were growing up.

But poor Kyle, and people like him – and I include myself in that – are… well, some of the more discredited psychological opinions on homosexuality used to assert that it was a result of a retardation of emotional and or sexual maturation. We never really grew up, therefore we were never really able to leave same-sex crushes or sex for pure pleasure as opposed to the concept of sex as the means of procreation, behind us.

If you’re told every day, either explicitly or via the fact that your culture, your world simply does not reflect you, that you are less than, that you barely exist, it’s easy to retain, for the rest of your life, a strand of that “Worthlessness” running through your DNA.
It’s a scar, and like physical scars brought on by childhood physical abuse, it will probably never entirely vanish. But you can learn to see it for what it is: a reminder of how things used to be and not of how they have to be forever. Someone with a physical scar can look themselves in the mirror and know that they are stronger and more beautiful for having survived and thrived from that trauma, or they can hide in dark rooms hating their appearance and avoiding people who might see the scar. They can liberate themselves from their past, or they can allow that scar to become a whole new form of abuse – self-perpetuated abuse, this time.

And those who bear the spiritual scars of the jeering mocking hatred of a society that tells boys ‘it’s shameful to wear makeup’, or ‘it’s disgusting to want to hold another boy’s hand’  can be the same. They can see it for what it is, or they can allow that shame-scar to make them embarrassed to be seen as “too gay”.

I used to feel like that: I was a Gay Man who was proud and loved by his family. I’m a big fat gay who writes big gay books about a gay man investigating mysteries and they are camp and funny and I couldn’t really be more out or more gay.

And yet. And yet.

Can you see where this was coming from?

Somewhere deep inside of me – so deep I’d basically forgotten the cavern even existed – voices were telling me that “Gay” wasn’t as good as “Straight,” that being seen as only a “Gay writer” would be limiting, that being “the gay one” would, in some way, make me less than the other writers I knew.

I was Kyle Lee (minus, it must be said, the natty chapeau, but have you looked at the price of those fucking things? All I’m sayin’ is Kyle doesn’t need to sell many of those each month to pay for his taupe tiling and selection of cosmetic products). I was Kyle Lee and it took a lot of therapy and a few tragedies for me to realise what I truly hope he discovers soon: Nothing* you do is ever shameful if what you are doing is being an authentic open version of yourself.

Full disclosure: I have a spotlit taupe bathroom, a cupboard full of products (Kyle, girl, call me: I got some coupons for the Shiseido counter at Bergdorfs) and a pre-disposition to hating myself because I was trained to.

But you know what? I try to love myself, and I try to love other people, no matter how masc, femme, fat, thin, black, white, latino, asian, bald, hairy, camp or butch, dull or sparkly. Because if we – LGBTQI people – are ever going to stop the world hating us, are going to stop politicians and bigots trying to destroy our pride and erase us once more, we have a long and constant battle on our hands, and it’s going to have to start close to home.

(*within, obviously reason: I mean, shopping for foundation and powder is not shameful; wearing white after Labour Day ought to be grounds for a justified Homicide defence).

Derek Farrell is the author of 6 Danny bird mysteries. “Death of a Diva,” “Death of a Nobody,” “Death of a Devil,”and  “Death of an Angel” can all be purchased from the usual e-stores or directly from the publisher here. The fifth, “Come to Dust,” is available exclusively as a free download from his website . The sixth - Death of a Sinner - is a Fahrenheit69 Tete Beche Novella and is published in a joint edition with Ko Perry’s “Everything Happens.” It can be purchased here