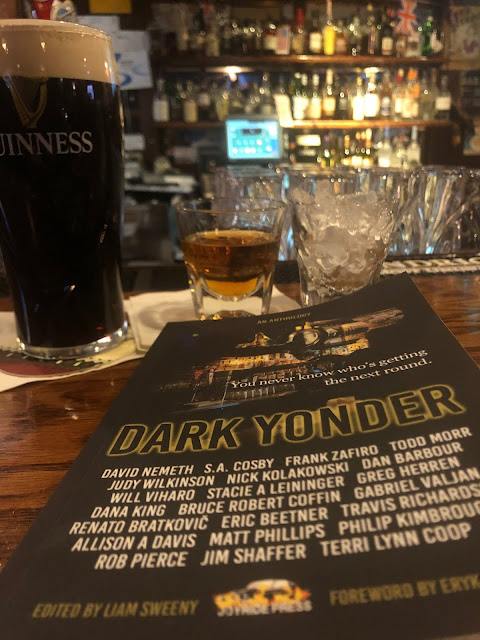 The newly released anthology, "Dark Yonder", is more than a bunch of writers toasting the opening of Eryk Pruitt and Lana Pierce's bar, Yonder: Southern Cocktails & Brew, it is also a celebration of the work and life of Eryk's mother, Jan Pruitt, who died in January 2017. Jan "served as President and Chief Executive Officer of the North Texas Food Bank (NTFB)  from 1997-2016." The NTFB provides 200,000 meals every day to residents of North Texas. A portion of the money raised from the sales of "Dark Yonder" will go to the NTFB.

I don't know what spurred Liam Sweeny to suggest the creation of "Dark Yonder", but kudos to Sweeny as he managed to round up twenty-plus writers from California to Maine and release a smartly-done book within six months or so. Quite an accomplishment.

Many of you will be reading this post while celebrating Thanksgiving (U.S.). If you are getting ready to stuff your belly with turkey (or a vegan substitute) or are in some sort of food coma, why not spend a paltry $12.99 purchase a paperback copy of "Dark Yonder". Not only will you get some great tales of crime and mayhem, in a very real way you'll be helping feed people that are experiencing difficult times.

Below is the beginnings of my story, "Retribution", which is included in "Dark Yonder".

New York closed his eyes, smiled, and fell off his bar stool. The bartender leaned over the bar and scanned the drunk for blood and bones. None, all Eryk saw was New York passed out on the barroom floor.

Eryk’s phone vibrated. Lana said that she’d be by after closing. He put his phone away and focused on the problem at hand: New York. He shook his head, turned off the music, and walked around the bar. When Eryk crouched down next to New York to check his breathing, he told the onlookers that he had him.

“You sure?” someone asked.

Another voice from behind, “You shouldn’t have over-served him.” Eryk turned and saw Bocce Ball, a bald guy who always paid cash and always, always complained that they covered up the bocce ball pit. Eryk couldn’t remember a time when he saw Bocce Ball playing bocce ball. He didn’t have the patience to deal with Bocce Ball tonight. Eryk stood and announced that Yonder was closing up early. “Sorry, y’all missed last call.”