“Kolakowski’s got a gift of scratching his readers’ itch for pulpy, gut-wrenching narrative that moves a mile a minute and never lets you go. A Brutal Bunch of Heartbroken Saps is a hell of a yarn that sets the stage for what should be an essential series for fans of the genre.”
—Angel Luis Colón, author of No Happy Endings and The Fury of Blacky Jaguar

“Ruthless, off-the-wall and surprisingly heartfelt, A Brutal Bunch of Heartbroken Saps is much more than a heist book, and showcases the skills of an emerging writer in Nick Kolakowski. Featuring memorable characters, a down-on-his-luck protagonist and a story that’s equal parts insane and sincere, Saps is the kind of book you read fast and revisit immediately to savor the experience again.”
—Alex Segura, acclaimed author of Dangerous Ends and Down the Dark Street

“A Brutal Bunch of Heartbroken Saps is a hell of a ride. Put on the Elvis tunes, or your best glittery suit, and enjoy Bill’s escape from the boys in New York. He’s trying to ditch his life of crime but it’s pretty hard to do when you have a bunch of stolen money in your trunk and a band of people on your tail. Maybe a woman could save Bill’s body and soul, and all that money? Whatever the outcome, Kolakowski’s fabulous writing shines and the twists and turns will keep you reading to the very last page. A wonderful, entertaining read.”
—Jen Conley, author of Cannibals: Stories from the Edge of the Pine Barrens

Bill is a hustler’s hustler with a taste for the high life. He pulls off big scores for one of New York City’s more vicious gangs…until he suddenly grows a conscience. However, living the clean life takes a whole lot of money, and so Bill decides to steal a fortune from his employer before skipping town.

With a bag of cash in the trunk of his car, Bill heads west, ready for a new life. But all that money makes him a tempting target for some bad people he meets on the road—and if that wasn’t dangerous enough, some old friends are close behind him, and they intend to make a trophy of his head.

Pursued by crooked cops, dimwitted bouncers, and a wisecracking assassin in the midst of a midlife crisis, Bill will need to be a quick study in the way of the gun if he wants to survive his own getaway. Who knew that an honest attempt at redemption could rack up a body count like this?

A Brutal Bunch of Heartbroken Saps is a gonzo noir journey into obsession, violence, and the power of love. 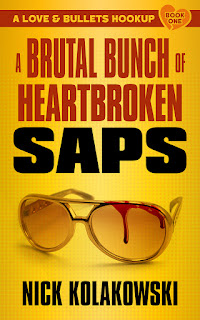