Doing Time: Jail vs. Prison for a Desperate Housewife

By Claire Booth
Felicity Huffman was sentenced Friday for her role in the college admissions scandal. She paid $15,000 for a test cheater to bump up her daughter’s SAT scores. The actor got 14 days in the slammer. And this is where—from my persnickety copy-editing point of view—things got interesting. And infuriating.
Jail and prison are not the same thing. They cannot be used interchangeably. Yet they were, repeatedly, during the coverage and social media conversations about Huffman’s case. I also see the mistake in crime fiction every once in a while. It makes me cringe there, too.
Admittedly, this case presented some challenges that aren’t usually there when you need to differentiate between jail and prison. I’ll get to those in a minute.
Typically, any criminal sentence less than a year is served in a jail. Jails are operated by local authorities, usually counties. They are designed to hold people who are awaiting trial or serving time for misdemeanor convictions. Prisons are operated by either a state or the federal government (there are also some privately run prisons—the same terminology holds true for them, too). They are for people who’ve been convicted of  felonies. Now, occasionally a person in prison might get out after serving less than a year (good behavior on an already low-year sentence or other reasons) but generally, this is how it works.
This information is pure gold for the crime fiction writer who needs a setting in the lockup. The two places have very different environments and you can create very different characters to populate them. Many times, though, writers just need a toss-off reference and that's where the errors creep in. Your main character's uncle isn't at the birthday party because he's incarcerated for a first-time drunk driving offense?  Uncle Billy isn't in prison. He's in jail.
Now let’s get to Felicity. This was fascinating to me, because it did not hold to the usual rules. She was sentenced to 14 days in "a facility designated by the Bureau of Prisons." The federal Bureau of Prisons doesn’t run jails, so it’s a reasonable bet that news organizations took when they said that she will serve prison time—even though she’ll only be there two weeks.
Here's the Associated Press, which appears to have done the same thing I did. It reflexively said 14 days in jail (bottom tweet), then corrected itself later after looking at the judge's Bureau of Prisons statement. 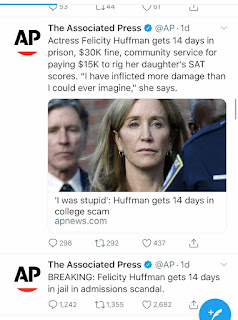 Breaking news is tough. Journalism is hard. The AP did it right here, and consistently stayed with prison for the rest of its coverage. Not like some places. This right here is the absolute cardinal sin: A headline that doesn’t match the story. 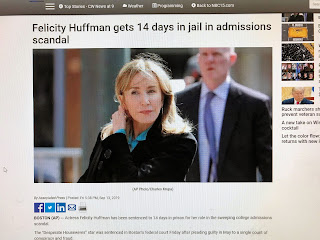 If all this is still confusing, then use a tried-and-true route. Pick a word that could mean either, like I did up above. It's not a solution in the journalism world--no editor would ever let you use them--but in fiction, they might accomplish what you need.
Slammer.
Clink.
Lockup.
Hell, use the word pokey. It might be corny, but at least it isn't wrong.

Tom Cruise (listening to a new recording) said...
This comment has been removed by a blog administrator.
September 15, 2019 at 6:41 AM

Leonardo DiCaprio said...
This comment has been removed by a blog administrator.
September 15, 2019 at 9:17 AM

Those are two of the most hilarious and brilliant com-girl-ts i`ve ever read, i literally fell off my chair laughing, cheers.