ZERO SAINTS is the first full length novel by Gabino Iglesias. It is a chilling, heart-stopping read. It's unique and philosophical. It elevates the reader and at the same time it was emotionally exhausting. I felt as though I needed a break after reading. Needless to say, I impatiently waited for Gabino's latest book.

COYOTE SONGS is more than a novel. It’s an education. It is a touching, terrifying portrait of life on the border and in the barrio.


Gabino is able to paint the violence and brutality with strokes of touching prose and poetry, making the undeniable sadness easier to swallow. His delicate way with words helps the reader to fully digest the tales.

He is a shapeshifter, fluidly fluctuating between Spanish and English in this killer tale and playing with a host of genres. Horror. Crime. Noir. Bizzaro. He flexes his mastery over a multitude of narratives and remains genuine and unapologetic throughout.


In COYOTE SONGS we meet…


There is so much to appreciate and discover in Gabino’s latest release, COYOTE SONGS. It will move you. This book will make you angry and sad. COYOTE SONGS is a deep dive into the reality of life along the border. Gabino Iglesias leads us through a crime story, horror and science-fiction. All the words and emotions converging and making for a highly impactful tale.


Gabino, a man who writes as if he’s trying to save the world, uses beautiful words to tell an ugly story and, like me, you will never look at the world around you the same way. I hope you read this novel and let it get under your skin. 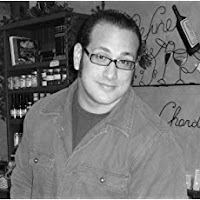 Posted by Marietta Miles at 6:00 AM