This year there is no Anthony Award for Best Short Story Collection or Anthology. Let me get this out of the way: there's no grand conspiracy, and the outcry is so great that there will certainly be one next year. Many attendees reached out to the Bouchercon board and steering committees, and they were surprised at the response.

I'm glad they will be back next year, because anthologies are a great way for new writers to reach readers without hiring a publicist. Not every publisher can rent the ballroom for a big gala at a major convention, but presses big and small publish anthologies of various themes, with big names as bait and writers you may not know yet. For example, Rogues edited by George R.R. Martin was a big one a few years ago, capitalizing on Game of Thrones and luring readers who might think every story was about their Dungeons & Dragons style level 2 footpad into reading a crime story by Joe Lansdale. Not that Joe is new. Scott Lynch was new in comparison to the other writers in the roster, and may be a better example, even if his Gentleman Bastard series is quite popular.

Crime fiction anthologies aren't quite as popular as horror, science fiction, and fantasy, but there are several great ones every year, such as The Highway Kind, or Alive in Shape and Color, edited by Lawrence Block, which I happen to have a story in next to giants like Lee Child and Joyce Carol Oates. It doesn't only feel good, but you get seen by more readers than you ever have before. LB's first art-themed anthology, In Sunlight or in Shadow, was even bigger, with Stephen King and Lee Child, plus newer writers like Warren Moore. It introduced me to writers I didn't know, such as Nicholas Christopher, whose story still haunts me. They are great for established writers and new.

And so are short story collections.

Some folks plain hate short story collections. I asked their reasoning, and was told that as soon as you like a character in a short story, it's over. So that's why "linked story" collections are more popular. And readers who don't have time to sit and finish a story have trouble keeping them straight, while in a novel, you can usually pick up where you left off more easily. I understand, I even prefer novels myself, as much as I love a great short story. It really can be like Forrest Gump said, a box of chocolates, where unless you get the Russell Stover Cherry Cordials, you just never know what you're gonna get. If you happen to just like the hell out of candy, you'll be a happy reader.

I have a dog in this race, because my first Anthony nomination was as editor of Protectors 2: Heroes. And a lot of my favorite lesser-known writers have had nominations for short story collections and novellas, such as Jen Conley, Chris Irvin, and Angel Luis Colon. Readers got to see their mugs in the Bouchercon program, and maybe they read their books. Story collections and anthologies introduced me to countless writers in all genres, from Octavia Butler and Vonda McIntyre, to Scott Philips and even Megan Abbott (her story in L.A. Noire is a killer!). So don't underestimate a story collection or a themed anthology. The themed ones seem to do best, and old pros like LB know the score. That's why his latest, At Home in the Dark, is themed around the dark outlook inspired by O. Henry's last words. And Holly West, editor of Murder-a-Go-Go's, themed hers around the music of the band The Go-Go's.

What's my theme around those? I happen to have a story in each of them, "We Got the Beat" in the Go-Go's antho (I had "This Town" in mind until no one took their biggest hit song, then I grabbed it) and "The Cucuzza Curse," in AHITD. LB has Joe Hill, James Reasoner, Joyce Carol Oates, and more in that one, so my readers can be introduced to them. Ha, ha. Joe Hill's novella "Faun" has already been picked up by NetFlix for adaptation, so hopefully we'll get a lot of new readers meeting Joe Cucuzza with this one....which was supposed to drop on April 30th, but is now available to order in ebook or paperback. 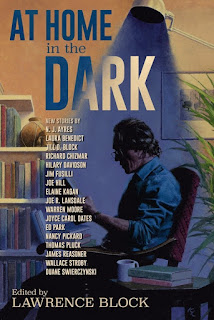 Since we can't vote for best anthology or story collection at Bouchercon, what were your favorites of last year? Florida Happens was a blast. You can always nominate individual stories! I don't have any published this year, but there were plenty of fine ones written.