The cover of Violet LeVoit's Scarstruck promises "PINKOS! SICKOS! CIGARETTE BURNS!" and it delivers that - and so much more. When Violet sent me the press kit and called it a romance, she had a hint of warning "It's out there," she said,  despite knowing I'm a long time reader of her work. Of course that kind of warning from Violet couldn't do anything but excite me. This erotic romance is kinky, queer, communist, and while it reads like Old Hollywood filth, the heart beating inside the unpredictable love story is strong. I found myself struck by lines like “The world puts you on a pedestal and knots a noose around your throat. Stepping down means snapping your neck,” and tearing up toward the end. It's hard to know what to root for or even how until Violet points you in the only direction that makes sense.

This Old Hollywood romance might not be for the faint of heart or the prude in sexuality, but it's a good, fast, heart breaking read where you can't help but hope the characters you encounter manage to figure it all out. 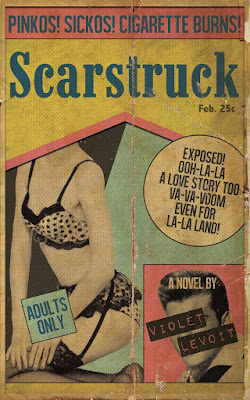 I asked a few questions of Violet and she was kind enough to answer.

All three of the characters we spend the most time with are outcasts, even in the Hollywood, where they came to reinvent themselves. It seems to be a story about the cost of denying one’s true self, and about the different kinds of love people can feel for one another. What drew you to this time and place for setting?

That's exactly it. This book is a hybrid of a psychological novel and a romance (but I make no bones about that it is absolutely, primarily a romance – more about that later.) The setting is strictly a love for Los Angeles and the era, especially through a James Ellroy-esque lens: the contrast between LA's mythologies and its reality, if the place can be said to have a reality. I love Los Angeles because it's like a faerie zone in a fantasy novel – a charged place where the veil between truth and untruth is very thin, because it's built around the movie business that is, essentially, a manufacturer of fiction, which is another way of saying lies. There's a lot of the movie L.A. Confidential in this novel, a little Mad Men, a little Kenneth Anger (another son of LA and the movie business).

Did you find it challenging to keep in the headspace of Old Hollywood?

Staying in this headspace wasn't hard – it was honestly a delight. I've been a film critic and film journalist for over 15 years now, and before then I was an autodidact film historian, starting from childhood. I love the look and mood and history of the 1950s. I did some research about the realities of being queer/kinky in Hollywood during that time, including Gay LA by Lillian Faderman and Stuart Timmons, and The Man Who Invented Rock Hudson: The Pretty Boys and Dirty Deals of Henry Willson by Robert Hoffler.

Ironically, the setting is part of why this book was a hard sell. I didn't know going into it that the market for historical romance is entirely either for books set from the Regency period to World War I, or for books set in the present day. 1920 to 2005 is a blank space with no market. Who knows why? But had I known that, I still would have written this book exactly the way I did.

It was super easy to write Ron's POV, since most of his fetishes are mine. (But I have more fetishes than Ron, and I've already said too much, so if you're not currently in my bed I'll just keep the rest a mystery.) I've had male readers tell me that I get into the headspace of male characters very easily, that they recognize themselves on the page in a way that's different and more personal than the standard "male" lens of our culture – which, after all, a lens is not the reality of being someone.
Writing female characters is something I had to grow into, partly because they are more autobiographical – it's not something people would guess from how raw and explicit my books are, but I am actually a very private person for whom it's hard to self-reveal. Writing male characters is just enough of a mask that I feel more comfortable revealing my inner self. (There is a female character in this book whom I am just in love with, though. She is the best character I have ever created. I have no "I love all my children" illusions about that. She's the best.)
Even though the house style for many trade paperback romance publishers is to have a "he said, she said" POV that alternates between chapters, I don't think readers expect a romance to be about a man's emotional life. But men love too. I would like one of the ripples from this book is for writers to think more about romance as a legitimate genre that explores important and vital themes about the human condition, just as legit as any other genre fiction.
As far as the BDSM in this book goes, I wrote it from the POV of someone who's gripped by these fetishes that are deeply embedded in a sexual map that started forming in childhood, and because of his shame and the era he's in he's not part of a community or a public dialogue about best practices, and he's just making it up as he goes along. Sex scenes in an erotic novel should be like musical numbers in a musical – they can't just be boning each other just because. Their coupling is about something just like how a song is about something. And so when there's a sex scene – and there's a lot of them – I used them as an alternate way to express a deeper theme in the character's lives, and where they are on their journey.
But this is the first time I've written about tender, unabashed love, and those scenes were harder to write because a) the line between passionate and stupid is very thin and I didn't want readers to break their suspension of disbelief by snorting at the kind of lines that romance fiction is pilloried for ("My loins are aflame with need, my tempestuous minx"). But at the same time you have to express the intensity of that feeling, of being completely overtaken.
Andy Warhol once said that he loved America because when you see the Queen of England drinking a Diet Coke it's not like she's getting a better one because she's the Queen. It's the same Diet Coke you can have. And falling in love is like that – everyone has the same experience of it, no matter who you are. And it's simultaneously a very unique, rare, exquisite experience that's only yours, and an experience everyone can relate to, if they've been blessed to find it. So that's a delicate thing to write about, and I wanted to get it exactly right.

While the severity of the consequences for gay sex/kink/communism and the other traits and behaviors that our characters exhibit may not be as steep as they were in Old Hollywood - I found myself struggling to think we’ve necessarily come that far. How do you think the themes you work with in Starstruck translate to the modern day?

There are people everywhere right now struggling with their sexuality. It's gotten better for certain groups of people – queer people, kinky people, poly people – but there are so many people wishing they didn't have the fetish they have, or the fantasies they have, or the subject of their desire, or how they want to express those desires. They're everywhere. Let's be clear – just because you have a desire doesn't mean you should act on it, especially if acting on it means inflicting real lasting harm on a vulnerable person. But I think anyone can come to some kind of self-acceptance and peace and equanimity with who they are. And nobody has ever had a better life hating themselves than loving themselves. So that's what I want.

Pitch this book to someone who’s never read your work and may or may not be a prude:

First of all, I never try to sell anyone on my work. I know all my books are so intense and explicit and speak frankly about so many taboos that I never want to inflict them on anyone, and in fact if I'm making chit-chat with someone and they express an interest in reading my work, I warn them right off the bat that my writing is not for everyone. (I just did the audio book for my previous King Shot Press book I Miss The World and we had to record the last twenty pages twice because the audio engineer didn't notice it had stopped recording, because he had his face in his hands thinking "oh my god oh my god" the first time he heard the ending.)
But having said that, I think there are a lot of people out there who believe the romance genre is not for them. And I would like readers who want to challenge that assumption, that it can be more than pre-feminist ravishment fantasies. It can say something about the human condition, and the subtleties of how we come to love a person, and it can do it while being very sexually explicit, kinky, pansexual, and polyamorous. I guess an open mind is all I ask.

Thanks again to Violet for the opportunity to read Scarstruck and share it with all of you, and the great interview. Preorder Scarstruck for it's Valentine's Day release. 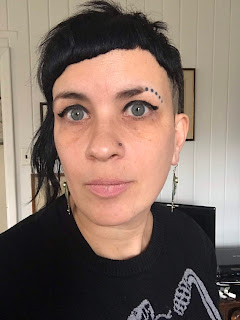 I pre-ordered this book for the cover alone but once I read the interview I knew I'd made a good decision.

It's depressing to hear that old Hollywood has no market—that makes no sense to me. There's so much fodder for good stories there.

Looking forward to reading this!

Definitely let me know what you think! I didn’t want to give away any of the developments so it’s hard to talk about with people who haven’t read it!