What a year we've had in publishing this week.

We had the Dan Mallory lunacy, on which I already did a funny.

Jason Heller, whose publication credits include NPR, the Atlantic, Rolling Stone, and The New Yorker, suggested this week that you should probably quit your job and follow your dream of being a writer.

Perhaps he knows you and thinks that this is a good idea. I don't know you, and it isn't.

Some folks, such as Gretchen McNeil, manage to write while also making that sweet, sweet bill-paying money. Maybe you like being able to go to the hospital for your annual exam, a task I dreaded much less prior to the recent onset of the "bend over" years. Perhaps you like being able to clothe your children before sending them to school. Perhaps you enjoy food. Or your spouse does.

Heller received 2,428,934 (estimated) replies to his suggestion. The majority of replies echoed McNeil's above RT w/ comment & were of the "Uh, that's a negative, Ghost rider" variety. To wit: 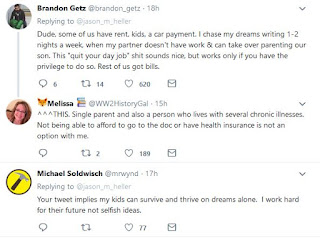 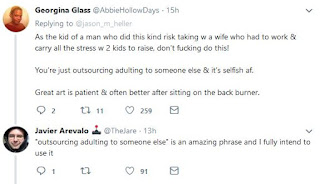 It's Twitter and it's terrible advice, of course, but this is Chinatown, Jake.

At least Heller (no relation) seems to be enjoying his fifteen minutes:

In looking at the week, I thought today I'd look at Mallory and we'd do more funny takes.

And, perhaps once the funny takes are over, we can look at the more serious aspects of what the Mallory story touches on: 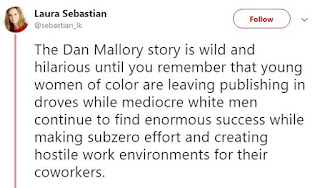 Perhaps you and I can keep our eyes open for more of those stories and share them and engage with and, maybe, do some digging and helping of our own soon.

Today, though, I wanted to look a little at some other unbelievable nonsense -- the idea of going into debt to get your novel edited.

Maybe you've taken Heller's advice and quit your job. Now you can't afford Keating's editing services. Keating is the author or The Light: A Book of Knowing: How to Shine Your Light Brighter, which is published by the Light Network.

For whatever reason, I was not familiar with Keating's work with Light and Knowing and Shining. According to her author bio, she is a "spiritual mentor" who was visited by a ball in her bedroom one night:

I haven't much interest in making light of her bio here. I, myself, likely would have passed something like this off as indigestion, more "gravy than grave" as Mr. Dickens might have put it. Keating, however, has turned this into books and business.

As for her business, she suggests the following for writers who might have a manuscript lying about: 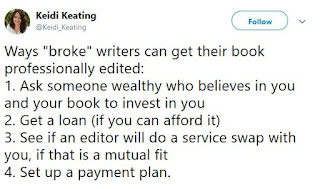 I'm not terribly interested in picking apart the ethics of this. I don't know you, but it seems getting a loan to have your manuscript edited is a terrible, terrible idea. Editing can cost thousands of dollars. Do you expect your book to bring you that back soon? When you're paying off the loan (a $5,000 loan with reasonable interest paid back over two years) at $250 per month or so, are you expecting your advance to cover that? Royalties? Maybe you think you're just one copy edit away from a movie deal. (You aren't.) Please, please be realistic. This idea of taking out loans to follow your dream is bad, bad, bad.

Can you get up early to write before the job? After? Can you knock out a hundred words at lunch? Can you carve out an hour each day to write? Don't quit your job.

Can you find a writers' group to join? Swap beta reads with other writers? Find sites online where you can join critique groups? Can you do that for your draft instead of going into debt for an edit?

Sometimes, doing a swap with an editor might work. It worked for editor Jim Thomsen:

(An "armoire," as it turns out, is some sort of cabinet thing found in France.)

So, you know, maybe that works for you. At least that way, you're not going into debt. Asking someone for money -- whether from a bank, credit card, or "someone wealthy who believes in you" -- seems to me to be a terrible, bad, no good, horrible idea.

Consider: Do you need to have your manuscript edited before you 1) query an agent? 2) before you self-publish?  My thoughts are 1) probably maybe not and 2) yes, yes, yes, please.

Later in his Tweetday, Thomsen said he's had authors with Big Six/Five publishing contracts who have asked for his editing services, because the editing services offered in-house were rather rubbish, according to the authors. Maybe you need outside editing then.

Editing -- professional editing -- is very, very important and should be priced accordingly. Pay an editor $500 for your 150,000-word novel, as Thomsen suggests some authors want? Hahahaha. That ain't going to be good editing. How long did it take you to write that? How long do you think it will take a professional, talented editor to help you work through the problems and strengthen it? Yeah. What's that worth?

Do you need a professional editor for your book? As Jason Pinter points out, it isn't on some sort of check-list you're required to complete before publishing.

Will it help? If you hire the right editor, sure. Is it worth it? That's a thing you'll have to consider, isn't it? To clarify, as Ben LeRoy says:

Again, editing is important and, if you want professional work done, you should consider whether you want to hire a professional.

Neliza Drew wrote one of my favorite books of 2016, All the Bridges Burning. Drew worked with professional editor Elizabeth A. White on that book, so I asked about the process.

I asked Drew how she came to the decision to hire a professional editor.

Neliza Drew: It was more an emotional decision than a financial one. Financially, it was stupid. I rationalized it by doing the cover art myself with cheap stock images, formatting the inside myself, and doing the coding for the e-ARCs myself.
Me: How did you decide on White?

ND: I hired Elizabeth White because Josh Stallings liked her work. I was told if I was going to hire a pro I should query it again. I'd already queried it several times. I probably should have stuck it in a drawer and just written something about dystopian vampires at boarding school, but I didn't.

Me: Did you consider or use beta readers?

ND: All this talk about "beta" readers means you have to talk other busy people into working for free and that might mean you're either taking writing time away from people who tell stories you want to read or your're relying on people whose opinions you might not trust. If you're like Josh Stallings or Chris Holm and you have a reader you trust who lives with you and is wiling to devote their time and expertise to improving your work, that's great.

Me: Did you consider writing groups with locals?

ND: I live in an area without good writers' groups. I've tried several and sat through critiquing rambling poems about "shafts of power" and stories about happy fairies finding hope in a tree nook. A lot of the established mystery writers down here either are former journalists or retirees with the money to buy editors (or have their own clique).

The end result from Drew's writing and White's editing work, All the Bridges Burning, was amazing and you should check it out.

Should you do what Heller says and quit your day job to "follow your dream"? Please don't.

Should you sell a kidney to hire an editor? Probably not.

Should you hire an editor at all? You should darn sure consider it.

Should you remove Dan Mallory from your Christmas card list? You know, I don't have all the answers. I'm still just trying to figure out what questions to ask.

Should we follow our dreams? My dudes, my dream last night was about the dishwasher's relocating itself to the other side of the kitchen, which wasn't exactly our kitchen, but more like the police station from Adam-12, even though the dishwasher repairman was Hawkeye Pierce and, as it turns out, it wasn't really a dishwasher, but a sink, which I knew I shouldn't urinate into, but I really had to go, despite my lack of pants. I mean, my dreams are weird and not something I'd want to follow. Of course, I've never had a dream about a ball of light in my bedroom, so maybe there's still time.
Posted by Steve Weddle at 9:07 AM

He should have edited "armoire" to "chifforobe"
I'll second All the Bridges Burning. great book.

Yes, and thank you. When I hear Indy publishers telling writers to hirer their own editors, my blood boils. BUT I also agree if you are going to self publish you should hire an editor. Me, I’m famously dyslexic, so my first 4 books were edited by Erika, my smart wife, and then by a pro. Elizabeth White was detailed and exacting. She found in Young Americans I was referencing a song that wouldn’t come out until a year after the book was set, and so much more. Did I make the money back? It took time but altimately I did. But that wasn’t why I did it, I hired Elizabeth White because I feel if you are going to put work out, it better be as right as you can make it.

ALL THE BRIDGES BURNING was fantastic. One of my favorite books. That Drew doesn’t have a publishing contract makes zero sense.

Must be easy to attack people when you don't have the foggiest notion what you're talking about.

Damn it, this was my entire post for Monday's Incident Report. Word. For. Word.

What part is Steve getting wrong? Sincere question, Anonymous.

You seem to have touched a nerve, Steve! Probably not the first time.

I've hired editors, including Elizabeth A. White. Those decisions fit my both my goals and my budget and I'm happy with the results. And I absolutely think editors should be paid what they're worth, which is a lot. I only wish authors could be paid what they're worth, too. A look at the recent author earnings report that came out shows that's not happening and it's only getting worse.

I'm so saddened by the brilliant work that doesn't see the light of day on account of financial distress.
This unseen work is the book that will influence society for the better; that will reach someone longing to hear a voice like their's.
This was the inspiration for the Author Assist program, of which I'm proud and want to grow.