How to Promote a Book Without Actually Talking About It

By Holly West
I want to thank Claire Booth for inviting me to post on Do Some Damage today. I’ll admit to missing the crowd over here lately, so her request came at a good time for both of us: She was having trouble coming up with a topic for this week’s post and I have a book coming out soon. It was kismet, I tell you.
It feels weird to say I have a book coming out when all I did was edit it. The authors who contributed the stories did most of the heavy lifting. Still—and a few of the authors might tell you this—I was a hands-on editor, maybe too much so. If you ever wonder how much of a control freak you are, take a stab at editing a short story anthology. 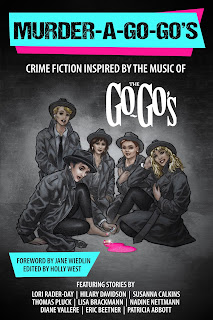 Two paragraphs in and I still haven’t told you what the book’s called. I never said I was a genius at book promo. MURDER-A-GO-GO’S: CRIME FICTION INSPIRED BY THE MUSIC OF THE GO-GO’S will be published on March 25 by Down & Out Books, but the good news is you don’t have to wait until then to buy it! You can pre-order it here or wherever impossibly cool books are sold.
Now that you’ve pre-ordered MURDER-A-GO-GO’S we can move on to what I really want to talk about today: TV. It’s my topic on the Do Some Damage’s podcast, “7 Minutes With,” hosted by Steve Weddle, with Jedidiah Ayres talking film and Chris Holm talking music. But we’ve been on hiatus for several weeks and I have stuff I want to—no, need to—discuss NOW.
A brief aside: Writers who admit to watching TV sometimes get some flak for time-wasting. Like I’d have already written the next best seller if it weren’t for all the TV I watch. It’s fair criticism, but I waste far more time on the Internet than I do watching TV. I say that as if it somehow justifies my TV consumption. It doesn’t—I just thought I’d mention it.
First up is Netflix’s “Abducted in Plain Sight.” I’m not sure how to adequately prepare you for it because it’s the most crazy-pants thing I’ve seen in ages, and chances are, I’m not the first person you’ve heard say that. I’d seen it as I perused Netflix’s offerings but never stopped to watch it until a friend texted me: “I’m watching the most fucked up documentary on Netflix right now…” Jeezus, she was not kidding.
At first glance, it appears to be the story of a perfect family living in an idyllic community until their world is torn asunder by a sociopathic neighbor who abducts their oldest daughter. On its own, a horrific event, worthy of a closer look. But the details, my God, the details. I don’t want to say too much because each WTF moment is more insane than the next and you need to experience its unfolding for yourself. Just remember that the child at the heart of the story was a victim in all senses of the word and the adults responsible for her well-being utterly failed her. Utterly.
My husband just brought me a glass of rosé, so now we can really get talking. Since today’s topic is crazy-pants TV, I’d be remiss if I didn’t mention the Fyre Festival documentaries making the rounds. We watched the one on Netflix but there’s one on Hulu, too, and I’ve heard they’re both interesting. The Fyre Festival, if you recall, was supposed to be THE event of the decade that turned out to be an absolute shit-show. The one where attendees paid tens of thousands of dollars to see Blink-182 on a remote Caribbean Island and ended up sleeping in water-logged tents and eating bread-and-salt sandwiches. It’s interesting to see how it all went wrong (it’s pretty clear from the get-go it’s not going to end well) and how “influencers” fueled the race to get tickets.
Which brings me to my final entry: “The American Meme,” also on Netflix. My inclusion of this documentary isn’t necessarily an endorsement, because honestly, your life will be just fine if you skip it. It profiles social media stars Paris Hilton, Josh Ostroversky (The Fat Jewish), Brittany Furlan (famous for her Vine videos), Kirill Bichutsky, and several other influencers, as they openly discuss the peaks and pitfalls of their fame. This glimpse beyond their vapid, often offensive, online personas isn’t enlightening so much as sad-making. Not sad for them so much as for the society (ours) that has enabled their fame. I’m not victim-blaming here, I’m only saying that we’re all complicit and it gave me a lot to think about with regard to my own consumption of social media and the Internet in general. 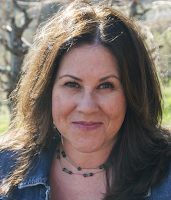 But not TV. I still love my TV.
Holly West is the Anthony Award-nominated author of the Mistress of Fortune historical mystery series and the editor of Murder-A-Go-Go’s: Crime Fiction Inspired by the Music of the Go-Go’s. She lives in Northern California with her husband and two dogs. More at hollywest.com.

Thanks for letting me blather on today, Claire!

I'm honored to be a part of YOUR book, Holly! Editing is work, as you well know.
I've been on the fence about Abducted in Plain Sight, but I think you pushed me into watching it.

that FYRE doc on netflix was amazing. loved it.

looking forward to seeing the Go-Go's book in the wild

Yes, with so much writing practice (millions of words a year over decades), you would think that one would be a top notch writer. What you however failed to mention was that the man who was "at it again", Dean Wesley Smith, has never produced a single renowned or truly bestselling book that wasn't mere fanfiction (and even then not) and simply churns out mediocre books after mediocre books year after year. So he is probably not the one to be giving lessons on how (or how not) to be an excellent fiction writer.