A Visit to the Nation's Oldest Bookstore... and Waffles!

This weekend we had a craving for Waffle House, Sarah and I. That dineresque Southern institution with a supply chain so sturdy they assist FEMA with logistics during hurricanes and other national disasters, and a menu so simple and comforting that "smothered & covered" is shorthand among enthusiasts, many of whom never order an actual waffle from the storied establishment. Those not in the know sneer like this is a Denny's or a Perkin's, but every Waffle House I have visited holds muster alongside your average New Jersey diner, and I've never had a bad meal there. 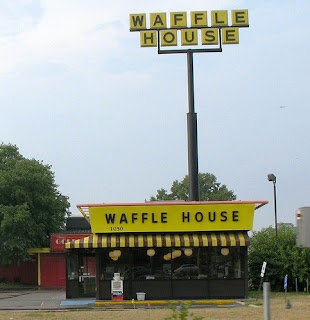 When you live north of the Mason-Dixon they become scarce, and they can crush your dreams. When Sarah and I were driving home from Bouchercon Toronto, one popped up on the GPS map in Stroudsburg PA, a city I haven't visited since a track & field tournament in high school, where I nabbed 3rd place in the freshman shotput relay. It hasn't improved much. As we veered off the interstate onto a main drag sided by every franchise you can think of, we looked for the familiar Scrabble tile yellow sign declaring WAFFLE HOUSE, but saw none. I even made an illegal U-turn to see if we'd missed it. And we had. Because the sign was there, but the lights were out.

I'd never seen a Waffle House closed before. Being the Yankee that I am, I've only endured two major storms and a power grid failure, and I had heard from Sarah that down South they know how bad a storm is by what the local Waffle House can and can't serve--road closures and power outages disrupt the fresh produce supply chain, so you can't get your hash browns smothered (with grilled onions) diced (with tomatoes) or capped (with mushrooms) when the storm is bad. You can nearly always get a waffle, but why would you do that?

We were heartbroken by the out of business sign, and this further cemented the terrible reputation of Pennsylvanian taste in our minds. So much that when we heard there was a Waffle House in nearby Bethlehem, PA--also home to Moravian Bookshop, the oldest in the nation and second-oldest in the world--that we double and triple checked that it was indeed open, before setting off on our little road trip. It was a lovely if frigid day, perfect for flying across Interstate 78 over the Delaware River. It is extremely difficult to leave New Jersey without paying a toll. This one was a buck, not so bad. Directly over the river, the geniuses of Pennsylvania DOT cut the road to one lane and create a massive traffic jam, but it is worth enduring to get yourself a Texas Cheese Melt with smothered covered hashbrowns. Trust me.

We visited the bookshop first. It was established in 1745 by the Moravian Church, and moved to its new digs on Main Street in Bethlehem in 1871. The town itself begins as industrial wasteland akin to Billy Joel's "Allentown", and you can sing "Bethlehem" to it, and annoy your driver, like I did

Well we're living here in Bethlehem
Where people think that we like them
But no one taught them how to drive
when to brake, signal or arrive
Oh they drive like shit in Beth-le-hem

(Forgive me, Pennsylvanians! Most of the bad drivers had Jersey plates. Most.)
Once you pass the Sands casino, which uses an abandoned railway bridge for its sign, you see the massive Hoover-Mason trestle and the Steel Stacks museum. It's like driving into mecha wasteland from The Dark Tower books or a Miyazaki film: 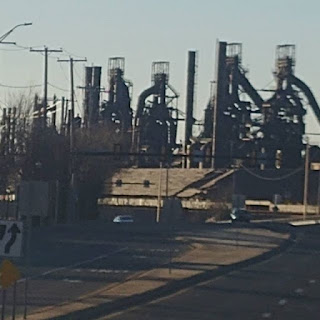 You need to cross another river to get to the quaint bits, which are quite nice. We parked and found a coffee shop that sold homemade chocolates, my favorite being coffee cups, which are like Reese's peanut butter cups but filled with espresso ganache. Addictive.

But so are books! 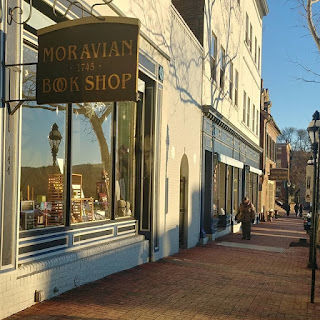 Moravian Bookshop sprawls through 14,000 square feet, has a lovely children's section, and sells Christmas ornaments all year round, it being the Christmas burg and all that. The store is part of Moravian College and is run by Barnes & Noble College Stores, but somehow has a smaller, if well-curated selection, than most B&N stores. I picked up Marlon James's Black Leopard, Red Wolf , as well as The Paragon Hotel by Lyndsay Faye--loved her adventure Jane Steele and Hotel has great word of mouth--plus Sing, Unburied, Sing by Jesmyn Ward, who blew me away with her Salvage the Bones, and Jerome Charyn's The Perilous Adventures of the Cowboy King, a fantastical retelling of Teddy Roosevelt's life up until his presidency, from the author of the Isaac Sidel mysteries.

A good haul! The store is friendly but does lack character, thanks to its corporate overlordship. I didn't even see a "Staff Picks" shelf, but I may have missed it. Sarah picked up Dumplin' by Julie Murphy--we liked the NetFlix movie--and Maddadam by Margaret Atwood. We're both fans of her work, too. 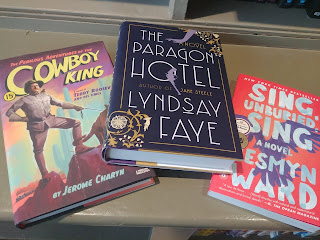 I haven't read those books yet but I did read We Cast a Shadow by Maurice Carlos Ruffin, a brutal satire of a black father trying to protect his son in a future that's a hair's breadth from our current madness. If you liked The Sell-Out by Paul Beatty, Friday Black by Nana Kwame Adjei-Brenyah, or Pym by Mat Johnson (a real classic) this delivers a gut punch in between belly laughs that nearly make you cry. Because it's not really funny. The nameless narrator is a black man at a white law firm who wins the diversity chair position by humiliating himself more than this colleagues, and he wants the promotion so he can afford to "demelanize" his biracial son so he can pass. The City can be any; I'd assumed New Orleans, but it's just "the City," encompassing all. There's an equivalent to the MOVE bombing in Philadelphia here. Ruffin makes it work. Sad villains are tough but he aces it.

The Adjustment is a book I had signed by Scott Philips at Bouchercon in 2011 and promptly misplaced for years. I'm glad I found it. It's one of the best crime novels I've read in a long while. It's actually about a criminal, and I don't mean a sad drunk cop who breaks the rules, but Wayne Ogden, a fixer for a rich drunk ass who used to be his hero. Ogden becomes his Iago. In 215 pages, Philips packs in a lot of story and no filler. Ogden is utterly reprehensible, but charming company for those pages, even as he sabotages the lives of all around him for his own pleasure. There's no villainous rubbing his hands together to show how bad he is. He just does what he wants, and knows how to get away with it. His privilege helps, and he knows it. I'm told this is a sort-of prequel to The Ice Harvest, so I'll read that next (I loved the movie).

Okay, back to those hash browns. The Waffle House is situated, like many of them, right by the onramp to the interstate, which made it perfectly convenient for us to sup there after satisfying our chocolate and book joneses. It's a nice little clean spot, was nearly full, and the service was good. We got our food very quickly, and part of the joy of a Waffle House is the open kitchen. You get to watch the short order cook whip it all up and run that grill like an air traffic controller at JFK during a snowstorm. Having slung hash in my past, at the night cafeteria for a defense contractor, I admired his work. These cooks are unsung heroes. Our hash browns were perfectly crisp, my biscuit grilled to delightful buttery char, my little patty melt delicious. Sarah always gets the Texas Cheese steak, which whomps the butt of Pat's or Gino's in my book because Waffle House uses this thing called "seasoning".  I never get the cheese steak myself, opting for hash browns all the way and biscuits, or in this case, a patty melt. Then we trade bites. Somehow, tasting the cheese steak one bite every few months or years makes them taste even better. 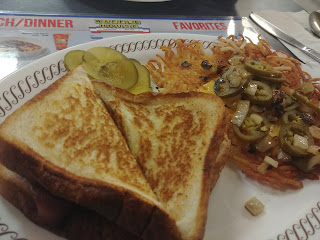 The portions are just right for a drive home without a rest stop, too. Even Anthony Bourdain buckled and praised Waffle House after trying them, because they do what they do very well. It's comfort food served honestly, not overdone or "elevated," it's simple and good. And when it's a short drive from the nation's oldest bookstore, it's the perfect finish to a lovely winter day.

If you need a good read, sadly you missed out on the limited edition hardcover of At Home in the Dark edited by Lawrence Block, which includes my mob fixer mystery "The Cucuzza Curse," and Joe Hill's novella "Faun" which was picked up by NetFlix. You can pre-order the Kindle version, and LB will be offering a trade paperback in April, but it's not up for pre-order yet.

And you can pre-order Murder-a-Go-Go's edited by Holly West, a collection of stories inspired by the songs of The Go-Go's, all proceeds of which go to support Planned Parenthood. I somehow nabbed "We Got the Beat" for my story, and I can't wait to introduce you to The Beat Girls. The Kindle is only $3.99 before publication, so grab it now.