Year of an Indie Writer: Week 2


The first full week of 2019 saw two interesting things. One was business related, the other involved writing.


The big news this week was the paperback proof of EMPTY COFFINS. On sale in form since 1 Jan, the paperback lagged, largely because of the holiday schedules of both me and the POD companies. But Ingram Spark did a great job at getting me the hard copy proof and it arrived Thursday. 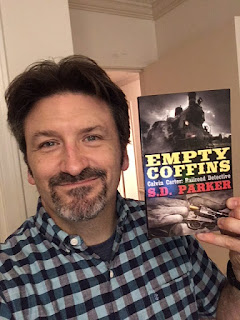 First, as a writer, there are few things better than getting a paperback of your book in the mail. It never gets old. But as soon as the pride beamed through me, I inspected the book.

And found flaws. The text on the spine . The text on the back cover is a tad too large. The cover looks great and exactly as I planned it. Inside, I scanned the intro pages, then the back. Sure enough: I found a few errors. One of them was in the “Also by” section where I switched two covers. I also read through my “Origins of Calvin Carter” essay and found a few tweaks I needed to make. Oddly, on my “About the Author” page, I noted the actual links to my Facebook and Twitter feed were missing.

It’s all the little things.

I’ll be making the cover changes today. I made the interior changes on Thursday night in the Vellum program.


I noted the Call to Action in the paperback had my request to join list and receive WADING INTO WAR as a gift. Well, if you read my post from last week, you’ll know I’ve changed that. So I need to update all my . All of them. Four mysteries, six westerns, and EMPTY COFFINS. Eleven files in Kobo; eleven files for Amazon, and eleven files for Draft2Digital. Yes, this makes the case for having a service like D2D be the sole source, but as I wrote last week, there are reasons I want to keep a direct line open to Kobo and Amazon.

But this time, I’ll have my Call to Action be more generic, and direct all traffic to my webpage. Then, if I change what I offer, it’ll only be at the website, and not 33 different files.


WRITING THE NEXT BOOK

I am having great success writing this new book. Until late this week, I’ve been using my old draft as a jumping off point and using vast swaths of that content in the new draft. It works welluntil it didn’t.

Twice this week, I felt my new creative voice stymied by the urge to go in a different direction. Usually, these little nudges adding a sentence here or there. Very low key. But what was pulling me this time was a new direction for the story, a direction my newer, more seasoned creative voice was telling me I needed.

Turns out, the creative voice was correct. One thing it said was the story needed a prologue. That thought drifted into my head when I was writing chapter 7 and it went on for way too long. Something in the back of my head whispered a prologue could solve lots of problems.

So I wrote a prologue. Boy, did those words spill out. Almost in an entire session at lunch this week. And they were good. I read the prologue to my wife—a fantastic first reader because she’ll call out anything that takes her out of the story. She liked it.

I learned to trust the creative voice and, from this point forward in writing this newly re-written novel, don’t be such a slave to the existing original draft. Let the story flow.

BLOG OF THE WEEK

writing, you can get a degree from a traditional college. For writing and selling fiction, however, there are tons of resources out there. Like I mentioned last week, I created my curriculum in fiction writing by reading lots of blogs and listening to tons of podcasts by writers are ahead of me on the writing journey.

Dean Wesley Smith is one of the best. A veteran of the writing business for over forty years, Smith has likely seen it all and written it all. In just the last decade, he has made the jump to independent publishing.

And he’s never going back. He lays out what he’s learned and how we writers can navigate this new landscape. He’s great for blowing up the myths surrounding the writing business—note the second word—and encouraging us writers to take ownership of our careers. His daily posts are almost the first things I read every day *after my writing is complete.* He had great posts today, one of which I sparked. Smith’s blog is literally a graduate-level course. You could learn so much just from reading and studying what he himself practices.

Give him a read. https://www.deanwesleysmith.com/