The Widows, by Jess Montgomery

I’m delighted to welcome Jess Montgomery to Do Some Damage. Jess and I met at the 2017 Bouchercon in Toronto, and it immediately felt like we’d been friends forever. Her novel, THE WIDOWS, hit stores on Tuesday. It’s set in southern Ohio in the 1920s and has two strong female main characters (one of them a trailblazing female sheriff), union organizing, coal miners…everything you could want in a historical fiction. It didn’t start out that way, though. Here’s Jess to talk about how a secondary character turned into something much more. - Claire Booth 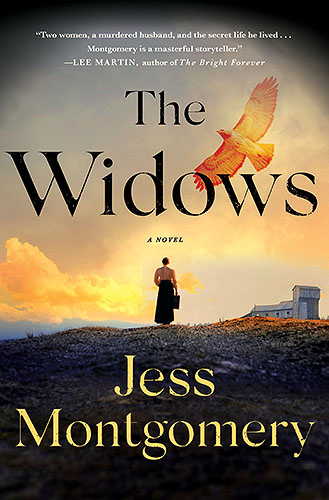 THE WIDOWS is set in 1920s Appalachia, as two women investigate murder and fight for their community.

One of the women is Lily Ross, inspired by Ohio’s true first female sheriff in 1925—Maude Collins, who became sheriff after her husband was killed in the line of duty. There was no mystery around his death in real life—he was killed while stopping a man to serve him a warrant. Maude, who had worked as her husband’s jail matron and lived in the county-owned sheriff’s house, was asked to fill in for her husband. She then went on to win re-election as sheriff in her own right in 1926.

In THE WIDOWS, Lily doesn’t buy the story of her sheriff husband Daniel’s murder—that a prisoner he was transporting got the best of him and escaped. Even before accepting the role of sheriff, she begins digging for the truth.

Marvena Whitcomb is the other narrator in THE WIDOWS. At the novel’s start, Marvena is already a widow of a coal miner, a union organizer, a long-time friend of Daniel’s. Her older daughter is missing and she goes to find Daniel for help, not knowing he’s dead. At his house, shortly after his funeral, she meets Lily for the first time.

The women start out regarding each other with understandable wariness. Daniel has never told Lily about Marvena, so this childhood friend—who he had been helping since the death of Marvena’s husband—raises a lot of questions. What’s more, in addition to being a union organizer, Marvena is a moonshiner, scrabbling to make ends meet for herself and her two daughters. Lily is not quite sure what to make of Marvena.

Marvena, meanwhile, regards Lily as soft and spoiled—a woman with a respectable position, living in a fine house in Kinship, the county seat, with a high school education and protected by Daniel.

As the women work together and get to know each other, their views of one another deepen and thus change. Marvena realizes that Lily has a lot more depth and strength than she thought, while Lily comes to understand the tenderness underlying Marvena’s tough character. They grow from wary, to working together by necessity, to true friends. Only together can they solve the intertwined mysteries of Daniel’s murder and the missing daughter, and ultimately face the challenge of saving their community from a bloody battle between rebelling miners and the more well-armed hired guns of the coal company.

I knew from the beginning that THE WIDOWS is primarily Lily’s story. But as I wrote, and tried to crack the enigma of Daniel’s character, I realized he had this childhood friend, Marvena. She quickly grew from being a mere mention, to a minor character, to a secondary character, to a dual narrator along with Lily.

Part of that was practical—Marvena knows details that are key, that Lily can’t know. In addition, Lily is a grieving widow from the end of chapter one on. So, I wanted to provide a bit of relief to the reader, as well, and give Lily some time and space to transition from shock to determination to find out the truth.

But as I kept writing, I also realized I wanted to explore the friendship between these two—as well as the strictures that might otherwise keep them from being friends, and how they overcome that.

It’s ultimately their willingness to see each other as individuals, and to allow their friendship and trust to develop, that enables them to solve the mystery together.

Jess Montgomery is the author of the Kinship Historical Mysteries. Under her given name, she wears several other literary hats: she is a newspaper columnist, focusing on the literary life, authors and events of her native Dayton, Ohio for the Dayton Daily News; Executive Director of the Antioch Writers’ Workshop at University of Dayton; and is an adjunct mentor in the Seton Hill University Low-Residency Writing Popular Fiction M.F.A. program.

THE WIDOWS is available through IndieBound, Amazon, Barnes & Noble, Books-A-Million, or order it from Aunt Agatha's Bookstore, where it is January's Book of the Month.