A is for Amy who fell down the stairs...

If you know the next line, you know Edward Gorey. If you don't, get yourself to The Gashlycrumb Tinies posthaste! You probably know Gorey's work anyway, if you have ever watched an episode of Mystery! on PBS. He created the opening titles. He also designed the stage sets for the Broadway production of Dracula in 1978, which are unforgettable. I am reading Mr Gorey's biography by Mark Dery, Born to Be Posthumous. The funny thing is that Gorey never sought fame, but he didn't dodge it when it eventually came. He kept working. doing exactly what he wanted, finding publishers who either understood his vision or were glad to let him pursue it without meddling. He struck up a partnership with Gotham Book Mart (RIP) bookseller Andreas Brown, who kept his books by the register, and published some. Gorey also started his own Fantod Press (the "fantods" are a 19th century term for the willies) and published his own work in the format he preferred, small postcard-sized books that fit one frame per page and could be read like a silent film, often with the prose on the left, like titles.

(this is from The Year of Halloween blog)

Poor Xerxes. Devoured by mice is a bad way to go. Edward Gorey grew up on mysteries and loved Agatha Christie in particular. He sends up the genre as only a lover can, in The Awdrey-Gore Legacy, which contains cards depicting characters, sleuths, murder weapons, and a list of clues that the murderer overlooked. And predicting the fan theory regarding Jessica Fletcher, "I did it, I killed them all" is scrawled on a card! 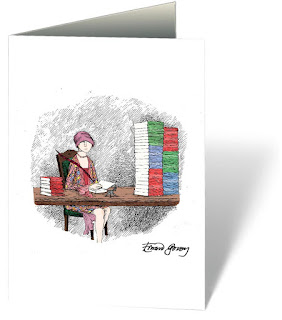 He drew Christie, as well. Gorey is a true transgressive outlier. He loved the 19th century aesthetic, the Edwardian period in particular. He devoured the old "instructive" children's books that threatened death, dismemberment, and eternal torment for misbehaving children, and often mocked them with his alphabet books such as Gashlycrumb. He used his art as a purgative; a true crime fan, when confronted with an evil he could not comprehend, he slew them with banality. The Loathsome Couple is his most divisive work. Bookstores sent it back! But he flays the serial killer myth long before Silence of the Lambs made pop-psych serial killer chic so popular. Evil is boring, killers are rarely interesting, and usually aren't that smart. He based the story on the vile Moors Murders. 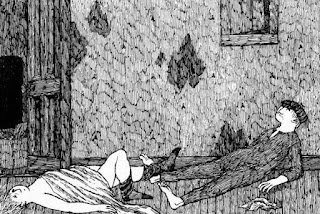 The drawing room mystery sensibility fills most of his work outside of his nonsense books. Gorey tends to be lumped with the horror crowd, but he's his own genre. Surreal period pieces influenced by mystery and Gothics. But there's a lot in his bibliography for mystery and crime fans. His stories may be spare but they speak volumes with his incredibly detailed ink drawings, all meticulously cross-hatched and filigreed with patterns and motifs, whether on wallpaper, clothing, or decor. Just look at the work it took to create the shabbiness of the room in the image above. The accompanying text? "When they tried to make love, their strenuous and prolonged efforts came to nothing."

The words drip with despair and strip the killers of all dignity. Gorey himself claimed to be asexual, though he presented as flamboyantly gay--dressing in full length fur coats and Keds, rings on every finger, both ears pierced when a single earring was considered "code," a lifelong obsession with ballet, and "crushes" on male friends that burned bright and turned to ash--perhaps the gay community was the closest to where he fit in, if anywhere. We are more accepting of aromantic and asexuals today, after decades of snorting and winking and assuming them closeted. Some critics lambaste Gorey for his privacy, for never coming out, accusing him of lying about being asexual. He admitted to one sexual encounter in his youth that turned him off. Personally, let him be himself. He told us what he was.

Perhaps he doth protest too much, but his unique gaze allowed for masterpieces such as The Curious Sofa, a spoof of pornographic literature as it was in the '60s, one of the funniest books of all time: 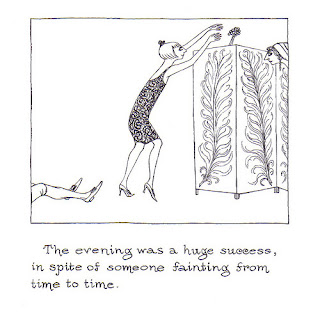 You can probably find the whole text online, it is perfectly work-safe and hilarious. It's like a mockery of human sexuality written by an alien who's been forced to observe the species against his will. Part of what makes Gorey's work so fascinating is that there's really nothing else quite like it. His influences came from 19th century England and Heian period Japan--he adored the novel The Tale of Genji--and he's beyond the playful morbidity of Charles Addams, taking the memento mori of the Victorian era to the extreme.

If you haven't read him, where to start? The Amphigorey collections, though they break the "silent film" format of his little books, are the best way to find his work. Still in print, and probably at your library. His work is also short enough that it's easily viewable online with a Google search, but where's the fun in that? Pick up one of his little books from the library and read it in a quiet room with a cat on your lap, and you'll want to poison the idle gentry or drop an urn on them.

I love Edward Gorey and have a few of his books. You feel like with each picture-story you're an entering a whole world. He's a great stimulant for the imagination, I find. Also, on the nostalgic side, your mentioning of the Gotham Book Mart in Manhattan brings back some memories. What a bookstore that was, an example of the best kind of indie bookstore, run according to the idiosyncratic tastes of Andreas Brown and before him, or along with him really, the original owner, Fanny Steloff. You'd go in there and see Fanny Steloff, in her 80's, sitting at the cash register, chatting with customers, suggesting books. A far cry from buying books online, that's for sure.

This is such a great analysis of Gorey's work. And how have I missed The Curious Sofa? I'm off to find it now.

Excellent and thanks. Was just reading about the new book in the NYT book review this weekend. Gotta dig in.

The bio is rather exhaustive and a little exhausting, but for obsessives like Gorey and myself, it is a great read. Scott, I agree about every book being its own little world; that's probably due to the deceptive simplicity of his meticulous, ridiculously detailed work. It draws you in. As a fan of Japanese literature and haiku, he focused on "what was left out," which is also a feature of some hardboiled and noir fiction, of the minimalist variety. There's a fine line between meaning and pretentiousness with that style that is sometimes up to the reader or viewer. I love Nicholas Winding Refn's movies, Sjon's fiction, Lynne Ramsay's You Were Never Really Here, Katherine Faw's fiction.... but they're not for everyone, and some similar filmmakers and writers don't work for me.