Scott's note: Dave Zeltserman guest blogs this week. Dave is the author of many crime, horror, and thriller novels.  His work can be unsparing and bleak. Yet he also writes the much lighter-toned traditional mystery stories (and one novel) about Julius Katz, a Boston detective who is brilliant and eccentric and very lazy.  Julius is a wine connoisseur who wouldn't solve much of anything if it weren't for his tiny computer more human than actual human sidekick, Archie.  So, clearly, Dave is versatile. He's also had a novel, Small Crimes, that was adapted as a film of the same name with Nikolaj-Coster Waldau, Gary Cole, Molly Parker, Jacki Weaver and Robert Forst.  Dave's newest book is called HUSK, and it's this he will talk about here. 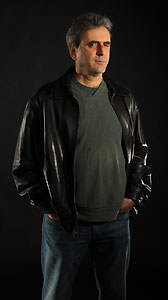 Cannibal noir. What a title for an article! Just the thought of it makes me a little queasy, as I’m sure it does others reading this. I had the same reaction when I was invited to write a story for the upcoming anthology Skin & Bones that will be edited by Dana Kabel and published by Down & Out Books (original title was proposed to be Kannibal Cookbook.) But Dana had Lawrence Block headlining the anthology, and if I’m given the chance to have a story in the same anthology as Mr. Block, I’m damn well going to do it.

On reflection, writing a cannibal story wasn’t that outrageous. My favorite Alfred Hitchcock Presents episode, Specialty of the House (based on the masterful short story by Stanley Ellin) has cannibalism at its core, although it’s done in a sly, bloodless way. And then there’s the most famous literary and film cannibal, Hannibal Lector, from Silence of the Lambs (as well as other movies, books, and a TV series), Harlan Ellison’s A Boy and His Dog, and movies including Eating Raoul, Delicatessen, and Soylent Green. And in a way, isn’t every werewolf movie cannibalistic? It might be a werewolf devouring his victim, but once the werewolf transforms back to human form, it’s the human who finishes digesting the meal.

But I digress. Or disgust?

Once I accepted that I was going to contribute to this anthology, I soon came up with a creepy idea that I liked and titled this story Sweet. As with Ellin’s story, it would be bloodless, although if my story were to continue past its ending, it would soon devolve into bloodthirsty savagery. But I stopped the cameras before then! Sweet has a woman named Melanie Sweet who’s pissed at her boyfriend for bowing out at the last minute on a trip to Vermont, and she decides to go without him. Along the way she picks up a hitchhiker named Jedidiah. Jedidiah had left his small New Hampshire village years earlier, and is hoping to be allowed to return home. Here he gives his reason:

“I wouldn’t call it homesickness,” he said. “I didn’t much care for the old customs. I wanted to live differently than they do, and I did okay. I’m good at carpentry, and made a decent living at that; also construction, and even some shipbuilding in Baltimore. But it’s your food I just can’t deal with any longer.” His expression turned more thoughtful as he continued to stare straight ahead. “I think your food would kill me if I stayed in your world much longer.”
“Why would that be?”
“Lots of reasons. The vegetables and wheat we grow are from seeds that haven’t changed any in hundreds of years. I can’t handle the mutated varieties that your world produces. They make me sick. The worst of it is in my village we’re raised as mostly meat eaters, and the meat you people sell in stores is like rat poison to me.” He laughed sourly and said, “Here I am talking your ear off.”
He certainly had loosened up from his earlier tightlipped self, and Melanie was glad about that. “I don’t mind at all,” she said. “I find what you’re saying unbelievably interesting.”
“I’m not used to talking so much,” he explained, his voice weakening. “We don’t say much in my village. And I haven’t had much of anyone to talk to since leaving home.”

Melanie ends up taking him back to his small village, except it’s far more isolated than she had expected. After spending hours hiking deep into the backwoods, she learns far too late the truth about Jedidiah and his reason for wanting her to meet his family.

A funny thing happened after I wrote this story—an idea for a noirish horror novel that would be almost the flipside of this story burrowed deep into my brain and I couldn’t shake it. This idea soon became the only thing I could think about writing, and so I did. In this novel, Husk, Charlie Husk is out in our world collecting stragglers to bring back to the clan when he finds himself falling in love with his first intended victim, a young woman named Jill who had been left stranded at a Massachusetts Turnpike rest stop by her jerk boyfriend. Instead of putting her in a canvas bag and throwing her into the back of his van, he instead rescues her and drives her back to her apartment in Queens, New York. Charlie decides that as long as he has a chance to be with Jill, he’ll stay in our world and live as one of us, but he’ll soon be learning it’s not so easy to abandon the clan. 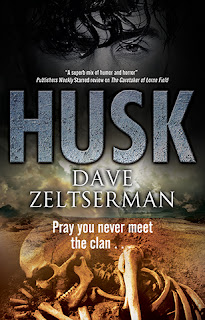 Husk has two of my favorite story elements—it’s centered around a creepy mythology and features a stranger trying to survive in a strange world. A cannibal story would naturally gravitate to horror when it’s from the point of view of the victims, but in this case where it’s from Charlie’s point of view, it becomes something different—a mix of noir and horror (and in this case, also a love story, or is a doomed love story?? No spoilers—you’ll need to read HUSK to find out!).

Mixing horror and noir isn’t new, and was done quite effectively in William Hjortsberg’s Falling Angel. Husk, though, just might be the first cannibal noir. Will there be others? God help us!

Labor Day weekend is always a good time to pick up students hitchhiking, but that wasn’t why I pulled into the rest stop on the Massachusetts Turnpike. While I had fourteen empty burlap sacks in the back of the van that needed to be filled before heading back home, along with more than enough rope and gags to take care of things, I didn’t expect to be picking up any of them here. While there’s always the chance of finding a hitchhiker at a place like this, it’s a small one and I was expecting that most of the stragglers I’d be getting would be in cities off the Turnpike. Hartford, Bridgeport, and if need be, New Haven. For this trip I hoped to get mostly students. They were generally healthier and leaner than the usual types – the prostitutes, drifters, homeless, and other such stragglers that I’d often have to collect. Students also tended to carry more books, clothes, and money on them than those others, all of which was good to bring back to the homestead. If I ended up needing those others to fill up the back of the van, I would. But I was hoping for mostly students.

Husk is available now. "the story is at once tender, brutal, fantastic, and vibrantly real. A unique and splendid novel." –Booklist, starred review

You can get Husk right here.
Posted by scott adlerberg at 4:00 AM