Reading The Road to Jonestown by Jeff Guinn, the first idiom plays on a loop in my head. Guinn's handling of the complex and often baffling story of Jim Jones and The People's Temple has a lot to offer. First, he lays out the facts, seemingly without judgment. In 2018, we all know how the story ends, but Guinn allows us a frank and often surreal look at how a story like this happens at all. Before you ever encounter the Jim Jones who told people he was God, had a harem, and eventually killed 900 of his followers, you encounter the Jim Jones who took a rough, confusing childhood and turned it into a career of civil service. When you read about his passion for racial integration, the nursing homes The People's Temple ran, and all the activism and real work they did to make the cities they lived in better places, it's hard to imagine that their leader (as shady as he was when out of their eyesight) would be the same man who became infamous for leading a suicide cult. It's hard to believe that many of these people were part of the 900 dead in Guyana. 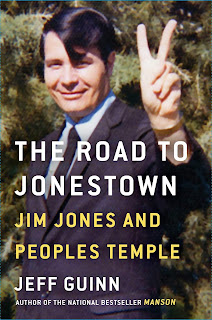 Worst, it centers the truth in the reader: these weren't gullible, weak willed people giving money to a huckster. These were intelligent, progressive, hard working people who believed in doing good.

As a consumer and frequent critic of true crime, the story is compelling because it seems that it is an irrevocable part of our culture and, at the same time, something mostly forgotten about.

As a writer of crime fiction, I can't help but look at the lessons this story, and the way Guinn approaches it, has to offer - specifically, in writing villainy. Of course Jim Jones is a realistic villain because he is real. I don't intend to dismiss the horror that the survivors of The People's Temple and the loved ones of those lost are still facing. Even as Jones built nursing homes and integrated white neighborhoods and all the objectively good stuff he did, he was meeting with another cult leader to learn lessons in leadership, performing false faith healings, and engaging in all sorts of shady practices. No one noticed any of the bad stuff because he hid it behind all the good - and he spun what he couldn't hide.

There isn't a cult leader in history that wasn't charismatic - so that's not really the important thing. What I find so important, from a writing stand point, is that even the most horrifically evil man you can imagine, could do good things, put up a good front, and get good people to do good work for decades. If Jim Jones were fictional, he'd be a well rounded villain. As a historical figure he's terrifying and baffling in equal measure.

Many biographies on Jones present him in his early days as nothing but a fraudulent evangelist, taking all his congregants' money for himself. Because Guinn isn't afraid to write on the objectively good things The People's Temple did and spent money on, the reader doesn't just get closer to the facts, the reader gets closer to the truth. There are a few truths Guinn communicates in this book, but the one I'm going to focus on is: Powerful bad men don't get power by being cruel and egotistical. They get it by making people like and admire them. They maintain their power in cruel and often evil ways, but only after convincing people to follow them.

If Jones had started out with a harem of women and young men he liked to fuck, a drug habit, and calling himself Jesus Christ - he'd have gotten nowhere. Not even his own wife would have gone along with it. But Jones started out as a preacher with a mission to do good work here on Earth, to promote racial integration, to get kids off drugs and take care of the elderly. He got his power by doing shit people wanted done. He kept his power with lies, manipulation, cruelty, and violence - but he got it by amplifying the parts of his persona that people saw as "good." The bad shit came slowly, bit by bit, his followers frogs in pots full of cold water that was slowly warming up.

Almost anyone can write a cartoonish villain who is pure evil. But can you write a villain with charisma? Can you write a villain that your reader will find themselves thinking "Shit, if I were there, I might have worked for that guy..." Of course, in Guinn's book, we know how it ends. Jim Jones isn't, and shouldn't be, known for building nursing homes or influencing politicians to be more progressive. He's famous for cyanide punch and nearly a thousand dead, including hundreds of children. But to write a book where the reader knows all of this, and can still step back and wonder if they, too, would have wanted to hear more of what Jones had to say - that's miraculous. Guinn's skill is unlikely to be matched in this arena, and that's fine. But writers of fiction would be foolish not to read this work and take notes on how to write a villain that leaves the reader questioning themselves.
Posted by Renee Asher Pickup at 3:00 AM

Great piece! I love this book, as I gushed on FB - was really influential, especially when it came to Blackout. And, you nailed it. The best villains don't think they're villains. They're right.

"If Jones had started out with a harem of women and young men he liked to fuck, a drug habit, and calling himself Jesus Christ - he'd have gotten nowhere." Not to be a cult pedant, but Charles Manson started out exactly that way. Not that he got terribly far, but still.