Monday morning in Thrillville with Will Viharo 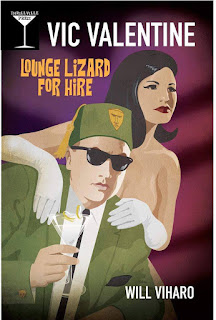 Will Viharo is a unique and vivid voice in a rather shadowy genre of storytelling. Shocking. Satirical. Personal. Today he tells us how and why he continues to create his vibrant works.

Q: You have created your own boutique publishing house, Thrillville Press. How and why did you embark on this major endeavor?

A: I’ve been self-publishing since 2010, after my twelve year career as a film programmer/theater publicist suddenly went bust when the company I worked for, Speakeasy, abruptly folded, despite its popularity as a local institution. Along with freelance writing products, I picked up a novel I’d abandoned in favor of this full time job, called A Mermaid Drowns in the Midnight Lounge, and finished it. Of course, the dozen or so years I spent presenting vintage Grindhouse and B movies had irrevocably warped my brain, and what began as a modest little neo-noir took a hard left turn into deeply disturbed, and disturbing, psychedelic, psychotronic territory, where I felt most creatively comfortable. This lurid, surrealistic style, heavily influenced by hardcore exploitation cinema as well as my own bizarre personal life story, became the hallmark of my work ever since. While I was at it, I also went back and finally published a number of manuscripts that had been buried in a trunk for years, going back to my very first, Chumpy Walnut, completed when I was 19. Fortunately I knew a lot of great artists from my networking experiences as an event producer, and employed them for the cover art. Still, like most writers, I was a lousy editor of my own work, and eventually let these titles lapse out of print, embarrassed by the technical errors. But not the work itself. I’m very proud of the stuff I decide to share.

Then in 2014 or so a startup small press I won’t publicly name approached me about republishing these books. I suggested reissuing them in volumes called “The Thrillville Pulp Fiction Collection,” and the editor agreed. I wound up doing most of the work, from commissioning the cover art to proofreading, though he helped me out with the latter. His enthusiasm really sold me. I thought he’d be my John Martin, the founder of Black Sparrow Press, which discovered Bukowski after he toiled in utter obscurity for years, with no hope of success.

Long, sordid story short, the guy wound up being a crook and a charlatan, one of many I’ve been suckered by over the years, and the whole enterprise went belly up shortly after these books (and others by different authors, including Danny Gardner) hit the market. The rights immediately reverted to me, and since I had all these files complete for upload, I decided to just slap my own trademarked logo on them, and immediately reissue them under my own brand, so all that hard work wouldn’t go to waste.

Like many if not small and medium sized presses, this one published on demand via CreateSpace. I had access to the same online tools they did, with decades of experience as writer, editor and publicist under my belt, so why not just do it myself? I simply purchased unique ISBNs for each title, and I was back in business.

The Thrillville Pulp Fiction Collection is comprised of the novels A Mermaid Drowns in the Midnight Lounge and Freaks That Carry Your Luggage Up to the Room (Volume One); Lavender Blonde and Down a Dark Alley (Volume Two); Chumpy Walnut and numerous short stories spanning three decades (Volume Three); and the unpublished sequels to Love Stories Are Too Violent For Me: Fate Is My Pimp, Romance Takes a Rain Check, I Lost My Heart in Hollywood, and Diary of a Dick (Volume Four). I’ve since published the recent works Vic Valentine: International Man of Misery and the erotic horror noir novella Things I Do When I’m Awake, inspired by the life and death of my tragic mother who suffered from schizophrenia. Currently I am working on the latest, Vic Valentine: Lounge Lizard For Hire, which may be the ultimate “Will Viharo Novel,” due out this fall.

Q: What is your big vision for Thrillville?

A: Well, that’s been my “brand name” for about 20 years now. It started out as a live “cult movie cabaret” I programmed, produced and hosted down in the Bay Area for many years. Once that gig ended, I decided to reinvent my established reputation as a B movie/burlesque impresario into a platform for my fiction, my first and true love, which I’d put aside to devote myself full time to cultivating my “Will the Thrill” lounge lizard persona.

The irony is, I was asked to create this show by the owners of the Parkway Theater in Oakland, who had also published my novel “Love Stories Are Too Violent For Me” via their first business venture, Wild Card Press. The idea was to generate buzz for the book by promoting myself as a local personality. The show - which started out as “The Midnight Lounge” in 1997 but was rechristened “Thrillville Theater” when it moved to prime time in 1999 - instead took on a life of its own, and my lifelong literary goals were put on the back burner indefinitely.

Then in 2001, the theater office received a letter from representatives of Christian Slater, who had discovered a copy of “Love Stories Are Too Violent For Me” in a L.A. bookstore and wanted to option it for a film, in which he’d star as well as direct. But that’s a whole other epic story with a sad ending, well documented and not worth repeating here.

Over the years I’ve had several very close calls with mainstream success. For over a decade I had an agent with Curtis Brown Limited in New York who didn’t do a thing for me. In the early 1990s, I was nearly published by celebrity editor Judith Regan, who took a keen interest in my work before unceremoniously dumping me after two fruitless years. I’m 55 now, so frankly, as the saying goes, “I’m getting too old for this shit.” I’m tired of putting my faith in people, only to have them let me down, so I’ve taken the reins of my own career, or whatever’s left of it at this point.

The upshot is, “Thrillville” has come full circle, since it’s now the name of my own imprint. My “vision” is simply to preserve my body of work for posterity. I am no longer a slave to my own ambition, so I have no commercial agenda. I am not competitive with any other authors or presses. I just keep my head down and do my own thing my own way, confident that staying true to myself distinguishes myself from the crowd. I tune out all the online noise and listen solely to my inner muse. I don’t care about awards and accolades, not anymore. I have always written primarily for myself, and nothing that happened to me over the course of my so-called career has changed that. If someone else is on my wavelength and digs my work, great. If not, that’s cool too. I aim to please no one and nothing but my own heart.

Will Viharo at Amazon

Q: Tell us about your next book, Vic Valentine: Lounge Lizard For Hire.

A: My first published novel, Love Stories Are Too Violent For Me, was reissued by Gutter Books in 2013, when the movie deal was really hot. My editor was Joe Clifford, who taught me a lot about “killing your darlings.” He also edited Hard-Boiled Heart, published by Gutter in 2015. It was directly inspired by the failed movie experience, and it was my first Vic Valentine novel in twenty years. Since Gutter was a crime fiction house, I kept the book fairly straightforward as a noir narrative. I was so distraught about how everything had fallen apart right when a lifetime of hard work about to pay off that that I had no plans for ever writing another novel after this, much less one featuring this character.

But then I was asked to be a guest instructor at a writer’s retreat in Costa Rica, and after this unique experience, I decided it would be fun to put Vic Valentine in that unlikely setting, since we both hate travel and the sun. The result was Vic Valentine: International Man of Misery, but since I published it via Thrillville Press, I no longer felt constrained by convention. It’s a genre-bending trip combining dog-walking (my full time day job, which I love), zombies, voodoo, hallucinogenic drugs, espionage, guns, and as usual, lots and lots of graphic sex. In short, not your typical “crime novel.”

I was so artistically satisfied with this work, dedicated to the Writer’s Retreat of San Buenas, that my new one, Vic Valentine: Lounge Lizard For Hire, is going even further. It’s full-on ultra- meta-gonzo, combining elements of all my books, not just the ones in the Vic series, which up till Man of Misery were fairly realistic, but also my favorite, A Mermaid Drowns in the Midnight Lounge, which distills the whole concept of “Thrillville” to its retro-porno horror-noir essence. In fact Chumpy Walnut himself, who is only a foot tall, has a cameo! It’s essentially a plotless, totally twisted, psychologically complex, erotically charged, existential fever dream. The central “mystery” is the secret of Life itself. I’m not sure if anyone else will dig it, but I am having a blast.

Q: What are you working on right now?

A: I'm working on a short story for an upcoming horror noir anthology I am not at liberty to publicly discuss yet, and I have another story called "Fish out of Water," my take on what could've been the fourth "Creature from the Black Lagoon" film (which I wrote long before "Shape of Water" was released), coming out in another horror noir anthology later this year. Horror noir is my thing. Cheers.
Posted by Marietta Miles at 9:21 AM