The Staircase, and the perils of being strange

Who else has been watching The Staircase?

Prepping for a recent trip, I had the TV on a lot while I tried to get ahead of all my chores. I watched several episodes of Confession Tapes and binged almost all of The Staircase, both available on Netflix. Both send a shiver down the spine, The Staircase especially, because they both show how bias and not fitting in can ruin a person’s life.

The Staircase follows the trial of author, Michael Peterson, accused of murdering his wife, Kathleen. It’s a weird case. Nothing about Kathleen’s death makes sense - whether it’s viewed from the POV of a murder or an accident - and so the preparation for, and duration of, the trial was often shocking and baffling. What’s kept me up at night, and kept me from finishing the last two episodes or looking for spoilers on Peterson’s retrial, though, isn’t lingering questions about whether he did it, or if it was a murder at all. Instead, what left me with a knot in my stomach was the fact that the police and prosecution flaunted using biphobia and Peterson’s allegedly open marriage as evidence in their case.

The persistent biphobia and rejection of the mere possibility that sometimes wealthy white men with wives they love very much go have sex with men (I mean, come on, we know this happens!) work for the prosecution in ways one would think impossible as recently as 2001. That would be enough to make me uncomfortable. But what threw me, made it impossible for me to worry over whether Peterson was guilty, innocent, or even a nice person, was when the documentary showed his former sisters-in-law going through his writing, digging up short stories, and reading his (fictional) accounts of death and murder. They read it out loud like it was a salacious confession, almost giddy in “proving” he was fucked up. One repeated over and over again “he knew something was wrong with him, this was him trying to figure it out.” They thought the first person stories, in particular, made it clear that Peterson was a born and bred murderer. 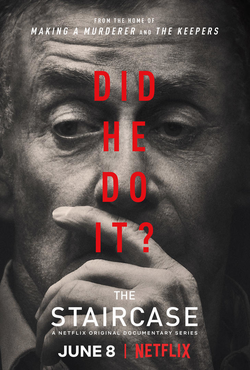 As a bunch of crime writers pushing the envelope and trying to look at the darkest parts of our world - this should scare the shit out of us. How could a fictional character murdering another fictional character even be considered evidence that a real life person murdered their real life spouse? When combined with the emphasis on Peterson’s sexuality and (maybe) open marriage, the message is clear: Don’t be a fucking weirdo, or you’re done for.

I find it hard to collect my thoughts on an author who wrote about war (which is often times uglier than crime) from the perspective of a veteran having his fiction held over his head like a guillotine, especially alongside hyper-phobia of bisexual men and non-traditional marriages. It’s too much to unpack. The lawyer, Rudolph, often seems as overwhelmed. At points I can’t tell if he is convinced of his client’s innocence, or convinced of his guilt, but baffled by how the trial is playing out.

I don’t have a nice bow to tie this all up in, as of now I don’t even know Peterson’s fate. But it would be nice to think that being a creative wouldn’t be evidence against you in a jury trial. Or that what kind of porn you watch, or the boundaries you set with your consenting spouse wouldn’t be aired out to strangers to prove what a deviant person you are. The irony is, it’s probably on the creatives to change public perceptions, so that people who write about bad stuff, or people who don’t fit neatly into the straight-monogamous-Christian and white box don’t have to worry that being themselves puts them in danger of anything from losing a job, to life in prison.

So I guess we’d better get to work.
Posted by Renee Asher Pickup at 4:49 AM