Scott's Note: Richie Narvaez guest blogs today, talking about something that deserves attention - the mix of crime fiction and music.  It's a rich topic, so why waste time?

The mix of crime fiction and music has been getting a lot of play recently. Several recent and upcoming anthologies partner harmony and harm, and it’s set me to thinking about how music echoes in the fiction of some of my crime-writing friends as well as my own work.

The Big Score
Publishers certainly like themes to hang books and sales on. Cats. Dogs. Cities. Holidays. Pastiche. Politics. But mostly cats and dogs. Still, there is something special about the duet of music and mystery.

Throughout history, every type of music has been vilified as Devil’s brew. “Ye troubadours maketh much evil!” “That Rudy Vallée sure is a caution!” “[Washboard players / blues singers / jazz musicians / rock stars / rappers] are in league with Satan!” Music is intimate, personal. It throbs with sex, subversion, and trouble. The beat of young love, the thrum of rebellion, the rhythm of the Other. It is the soundtrack to all our sinful thoughts, deeds, and fears, accompanying them and, according to some, even inspiring them.

So it makes sense that mystery and music tango well. Think of the appeal of murder ballads. Of the amount of violence in opera.

Consider Sherlock with his crashing violin. Traditional crime fiction certainly has an ear for classical music, perhaps because its writers had high tone tastes and/or because early crime fiction was a staunch upholder of upper class standards.

But by the mid-20th century, lonesome saxophones haunt the shadows surrounding middle-class private eyes, and later jazzy theme songs introduce such shows as Peter Gunn and 77 Sunset Strip. (Please think of the snappy theme song and not "Kookie, Kookie, Lend Me Your Comb"). I can’t think of Mike Hammer without thinking of “Harlem Nocturne.” Music is intricately linked with the genre.

Second Hearse, Same as the First
Music as a plot point for mystery stories has a long history. (For a generous list, see Josef Hoffman’s Music and Crime: 50 Novels: http://mysteryfile.com/blog/?p=17669). Music-themed crime fiction anthologies go back to at least Murder to Music: Musical Mysteries from Ellery Queen's Mystery Magazine and Alfred Hitchcock's Mystery Magazine (1998). In this century, there was Murder . . . and All That Jazz (2004) and then A Merry Band of Murderers: An Original Mystery Anthology of Songs and Stories (2006).

More recently — and you might sense a shift here in tastes just from the titles — we’ve had Crime Plus Music: Twenty Stories of Music-Themed Noir (2016), edited by Jim Fusilli, Waiting To Be Forgotten: Stories of Crime and Heartbreak, Inspired by The Replacements (2016), edited by Jay Stringer, and then Gutter Books’ Rock Anthologies, including Trouble in the Heartland: Crime Fiction Based on the Songs of Bruce Springsteen (2014) and Just to Watch Them Die: Crime Fiction Inspired By the Songs of Johnny Cash (2017), both edited by Joe Clifford.

Thornton calls these kinds of anthologies “the ultimate homage” to musicians who also happen to be great storytellers.

“And Steely Dan and crime fiction? Listen to their lyrics. So many of their songs have a potential or even outright criminal angle: ‘Kid Charlemagne,’ ‘Here at the Western World,’ ‘Sign in Stranger.’ I could go on and on.”

There’s probably more than an air of nostalgia in these collections, too, a longing for a, shall we say, more melodious time. So far, there’re no anthologies inspired by the hits of Justin Bieber, Ed Sheeran, or Rihanna. (Also: Note how most anthos so far are about male and dominant paradigm singers/bands.) But give it time.

Hitting a High C — for Crime!
Many of the stories in these anthologies contain lyrics or plot elements from the songs they’re homaging. For the Steely Dan anthology, I chose “Rikki Don’t Lose that Number” and wrote the story trying to figure out Rikki’s side of the story while referencing some of the song’s lines (without crossing into copyright infringement, I hope, I hope).

In writing that story, I realized I use music a lot as a starting point. In the recently published anthology Tiny Crimes: Very Short Tales of Mystery and Murder, edited by Lincoln Michel and Nadxieli Nieto, my story “Withhold the Dawn” was inspired by letting one word follow another as Don McLean’s “American Pie” killed me softly in the background. The song worked its way into the story, which is about a vengeful ax-wielder, not the Big Bopper, et al. But there is a loose pastry allusion. 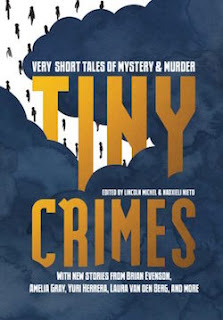 That’s the way music is. It’s is a large part of the pop culture detritus that litters our brains. But that can be helpful when writing.

When I was invited to contribute to the upcoming The Black Car Business, Volume 2 (September 2018), edited by Larry Kelter, I was stuck on what to write. I’ve no particular passion for automobiles. So I turned to Gary Numan’s seminal “Cars,” and the line “I’ve started to think about leaving tonight” turned in my head as a moment of crisis for a character. The story grew from there, and the line stuck as the title of the piece. 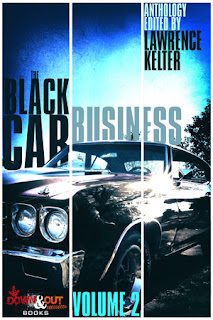 I’m not the only one, of course. Alison Gaylin (Crime Plus Music, If I Die Tonight) uses music to set the mood when writing, although she finds music with lyrics too distracting. “On the other hand,” she says, “I love to use songs in my books to help set the time period and in characterization. You can tell a lot about a character by what songs they like (and hate!).”

I remember Wallace Stroby’s Gone ‘til November contained many musical references, so he handed out CDs of the songs at his book launch. Says Stroby, “You had Johnny Cash songs next to hip-hop songs next to old soul songs, but they were all on the same theme — people leaving and never coming back. The whole tone I was going for in the book was reflected in the songs.”

Music then has its charms to soothe (read: prompt, inspire) the savage breast (of the writer), so that he or she may in-turn write about savagery.

***
You can get Tiny Crimes: Very Short Tales of Mystery and Murder here.

And you can pre-order The Black Car Business Volume 2 right here.

Great article! Me, I go in phases when it comes to playing music while I'm writing (bel canto opera and celtic mostly). Sometimes I need it to fill in the white space, sometimes I find it too distracting. I'm in a too-distracting phase now -- so this was a great reminder.

For anyone who was wondering what was on that GONE 'TIL NOVEMBER mix CD, the tracklist is here.

Can't seem to get the link to work, but here's the URL: http://wallacestrobycom.blogspot.com/2010/02/gtn-mix.html

Erica, Thank you! I've actually been using a lot of Mozart and Chopin now when I write. But when I was writing a novel set in 1979, I listened to a helluva lot of disco. It was good for blasting through a draft, but too distracting and boogie-inducing for editing.

Wallace, That is a great playlist. I know I still have that CD somewhere. I'll have to dig it out and give it a listen. Thank you for talking to me about music -- and for a lean, evocative novel.

Thank you, VS. Apologies if that becomes your earworm for the week!