I've had a rough year. Longer than that, really, but the last year has really stuck it in and turned. From about a week before Bouchercon and for the next several months I was suffering from some bronchitis abomination that never really let up, even after the infection was cleared, and took on a new upper respiratory thing that cleared up just in time for allergy season. I spent well over six months not able to breathe. On top of that, I had eczema around my eyes. It's difficult to treat, painful, and does a number on self-image.

I'm lucky in that I have access to decent medical care and I've been knocking one medical issue out at a time, just in time to go in for the shots I need in my leg every six months. In the meantime, I've lost family members, friends, a massive opportunity to do major things, and my husband got put on a surprise deployment to Kuwait for six months.

I'm not writing this all out for sympathy (but if you want to send me some whiskey or a cake, please, feel free), but to point out something I've talked about before here - life gets in the way of productivity. Sometimes we go into survival mode because we have to, not because we don't care about the things that get set aside. There's nothing wrong with re-prioritizing when life kicks you in the gut and keeps going - it's often necessary. But the problem we face when we come out the other end of the pounding is... all our good habits have gone.

I'm trying to recreate a writing routine and get those creative muscles functioning. I think it's really important to be able to write anywhere, but in order to get back into a serious writing habit, it's helpful to have that some rituals and routines that get your ass in the chair. 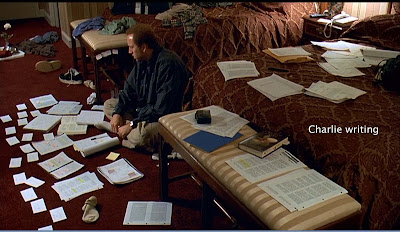 First - I'm rededicating myself to reading more. As a parent (and now, functioning as a single parent) reading time gets easy to put aside. Too busy in the day, too tired in the night. It takes weeks or months to finish books that I could knock out in a couple days. Now I'm reminding myself that reading is actually part of writing. When you get sporadic and lazy about reading, you have to recognize that you're getting sporadic and lazy about writing.

Second - I'm going through the old work to get reacquainted. Like most writers, I have piles of stuff I worked on, just to set aside. Either I couldn't make it work, or a deadline was looming on something else, and it got shoved in a folder and forgotten. The amazing thing about stories that "don't work" and "aren't interesting" is when you've allowed yourself time away from the work, a lot of them are interesting and exciting to work on.

Third - Stocking up on coffee and doing the fucking work.

Writing is writing. Sit down and do it. It's exactly that easy, even when it's ridiculously complicated. I'm letting myself write trash, I'm letting myself write without worrying about placing stories or finishing big projects, and I'm getting into the groove again. The last year really knocked me on my ass, but I'm not letting it win.
Posted by Renee Asher Pickup at 11:29 AM

Email ThisBlogThis!Share to TwitterShare to FacebookShare to Pinterest
Labels: do the work, word count, writing routines

Sending good wishes your way, Renee—and hopes for good momentum as you rebuild these routines. Sorry it's been a tough year, but glad you're hanging in there--hanging in there and more! Art