The Magic Sauce of John D. MacDonald in The Quick Red Fox

Four Travis McGee books in less than four weeks. I haven’t done that since….January when I read five Shadow novels. But the adventures of a pulp hero in the 1930s is rather different than those of the self-professed beach bum of the early 1960s. The McGee novels, as written by John D. MacDonald, are filled with glorious prose, astute observations of a particular place and time, and a hero with some genuine depth. The historian part of me relishes these novels specifically because of the place and time. Yes, it’s true that many of the undercurrents that swept over the later 1960s were well underway before 1963—when these novels were written—but you can never truly separate the idea that November 22, 1963, was a turning point. MacDonald, in McGee’s voice, saw the changes coming, and broadcasted it to anyone who would listen. I know these books were published in 1964 and I wonder how contemporary readers took MacDonald's observations. I’m also very curious to see if McGee ages up in these novels—the last one was published in 1985—or if he is always going to be in that particularly place and time. My assumption is that MacDonald puts McGee through the 70s and early 80s with as much acerbity and charm as he has displayed in these first four novels. The historian in me cannot wait to see what McGee might think of Vietnam, Watergate, and the changing landscape of the 1970s.

But what of THE QUICK RED FOX? The story begins simply. Lysa Dean is an A-list movie star with millions of dollars behind her name and image. That image would be tarnished if not extinguished if the dirty pictures someone mailed to her ever got out. You see, a year and a half before the book starts, she had a four-day fling full of booze, drugs, and sex. Someone snapped dozens of photos and mailed them to Dean. The movie starlet had paid off the initial run, but now, with a new picture ready for release, she wants McGee to locate the remaining photos and destroy them.

Simple, right? On the surface, yeah. But in reality, not so much. Dean approaches McGee via her personal secretary, Dana Holtzer. Dark haired (“Male musicians often wear theirs longer.”), dark eyed, and rather severe, Holtzer gets herself assigned by Dean to McGee, and the two literally jaunt around the country following leads and questioning potential suspects. Their interactions drive this novel, with McGee's looser approach versus Holtzer's uptight demeanor and backstory.

A remarkable thing about these four McGee novels: there is loads of talking but not a lot of action one might associate with private detectives. Granted, McGee is not a PI, but, going in, you might suspect that there would be plots in which multiple people want to take out McGee. There is, to date, a major action sequence in each book—the best is probably A PURPLE PLACE OF DYING—but other than that, it’s all legwork and interviewing.

And it’s utterly engrossing. I listened again to the wonderful Robert Petkoff’s narration of the audiobook, but I also purchased the paperback. I wanted to see if I could tell what made MacDonald’s prose so good on the page. Sure, he had McGee wax eloquent about this or that—his take on Vegas is spot on for 1964 and probably little would need to be changed for 2018—but it’s something different. Even now, in thinking about it, I’m beginning to form a thesis. I’ll have to check it out not only by reading more McGee novels, but in reading other MacDonald material. I went outside to the garage and pulled BORDER TOWN GIRL from a box. It’s one of two MacDonald books I owned before starting the McGee run, but I’ve never read it. I think I’ll crack it open and get a taste of a non-McGee book.

For long-time MacDonald readers, what do you think the secret is?

P.S., the cover at the top is the paperback I bought, but how provocative is this original cover? 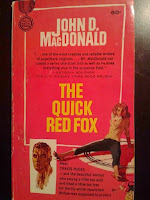 Just gotta say again how much I'm loving your tour through this series! It's been years since I've read, but I'm wanting to pull out my copies again myself. Keep it up!