Untouched, No Longer Read, but Saved

One day during my freshman year in college, at a small bookstore in Endicott New York, the old working-class town not far from where I went to college - at SUNY Binghmaton - I made what is probably the single greatest book haul of my life.  On sale for a few dollars each, the prices written lightly in pencil on the cover page of each book, were these volumes:

I had never read Borges at that point, but I'd heard of him.  Curious to give him a try, I bought all four books on the spot.  This was during the spring semester, I think; I remember reading Borges for the first time outside on campus and enjoying the warmth and sunshine after a long winter.  I don't remember what I was reading for classes during that period, but I do know that I tore through all four of these Borges books and that he then and there became one of my favorite writers.  That was in 1981, and since then I have re-read the stories and pieces in these books countless times.  I never get tired of Borges.  I also found and added - I don't remember when exactly - the collection of mystery stories he wrote with his friend Adolfo Bioy-Casares.

In this collection, a man named Don Isidro Parodi, imprisoned for a murder he didn't commit, is the detective. People come to his Buenos Aires jail cell with their stories of theft and murder, and Parodi, mental giant that he is, solves the crimes without once leaving the confines of his cell.  The stories are convoluted, amusing, and a lot of fun.  Borges, of course, loved mystery fiction, especially the classic kind, British or American, involving puzzles and ratiocination.

So I've got these five books, all published by E.P. Dutton, the translations by Norman Thomas di Giovanni.  Borges and di Giovanni were close, and in the 1960's and 70's, they worked together in Buenos Aires on these translations.  In a famous interview he gave in 1980, Borges said that di Giovanni's translations were better than his originals.  Now whether they are or not, I can't say, since I can't read Spanish, but I know that I love these versions of Borges' work and have been opening and reopening these editions for decades.

The problem is, I don't want them to fall apart.  I'm working on a piece now about Argentinian mystery fiction written during the Juan Peron era, and for the piece, I've gone back yet again to these old E.P. Dutton copies.  I re-read the Parodi stories as well as a couple of stories in The Aleph.  I handle the books with gentleness, making sure I don't fold the front covers back too far when I'm holding them, careful not to create any new seams in the spine.  And the books, well-made, solidly constructed (kudos to Dutton!), remain in good shape.  But they can't stay in good shape forever, not if I keep going back to read them.  The wear and tear will have to affect them.  The spines will crack; pages will come loose.  Yet I want to preserve these books.

There's a simple solution.  Buy new copies of these translations.

I can't, though, because after Borges' death in 1986, his widow renegotiated the English translation rights for his works.  This renegotiation is a story in and of itself, and I don't want to get into it here.  But the final result is that new translations were done for the Borges books and the di Giovanni translations went out of print.

I know that until the day I die, I'll be reading Borges. But I can't keep going to these di Giovanni editions unless I'm willing to see them fall apart.  They're such treasures to me now, I'm hesitant to open them.  I associate Borges' voice, his rhythms, his fiction itself, with everything di Giovanni brought to it, yet it seems the time has come to leave these books on the shelf as objects and get the new translations. It's a sad feeling, I have to say, letting these editions go, as it were, in order to save them, but I've done what I must. I've surrendered to the inevitable.  Just yesterday, I went to Amazon and ordered this: 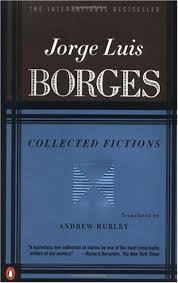 I shouldn't be harsh.  The cover isn't much to look at, but this edition does collect all Borges' stories, from the 1930's through the 1980's, in one place.  How will I like Andrew Hurley's translations after thirty plus years reading the master through someone else?  I don't know.  But obviously, I'll be reading from this book, and Borges does remain Borges. That mind, with all the conundrums it presents, remains his mind.  Let's just hope this particular edition has the physical strength of the old Dutton books.  Because knowing myself and my never-ending fascination with Borges, this volume will be getting a workout.