Saying Hello to Travis McGee with The Deep Blue Good-by 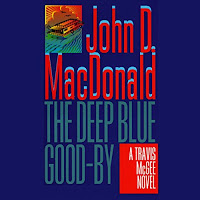 Travis McGee. His name is legendary in the annals of detective fiction, yet I had never read a single word about him. But his presence was certainly felt. Most importantly, I knew he lived in Florida (now I know the city: Fort Lauderdale) and his house was a boat: the Busted Flush. Much like Han Solo (er, the other way around, actually), McGee won the Flush in a poker game. I knew he wasn’t one of those licensed PIs in other books. Heck, he wasn’t even a PI. He considered himself a “salvage consultant.” He was just a guy who would take a job whenever his funds ran low. His standard procedure was to take a job and receive half of whatever was recovered as his fee. All of this I knew. What I didn’t expect was the type of story author John D. MacDonald crafted.

In this first tale, McGee is asked by Chookie McCall, a dancer friend (and owner of a perfect name in a novel like this) if he might have a listen to the story of another dancer, a Catherine Kerr. Cathy has lost something and McGee agrees. What he learns is that her son’s father walked out on her and Cathy’s had to give her son to her sister while she struggles to make ends meet. Moreover, the poor girl’s still torn over another loss: that of Junior Allen, a man who knew Cathy’s now-dead father from back in World War II. Allen ingratiated himself into Cathy’s life, but all he really seemed to do was look for something. Cathy never knew what, but one day, Allen left town only to return, this time with obvious wealth. He takes up with another woman, Lois Atkinson, likely for her money, too. Then, Allen again leaves.

Private detectives (yeah, I know McGee isn’t one but bear with me) have often been classified as knights errant, men of honor and character who stand against the march of time and culture. My reading of hard-boiled fiction isn’t wide, but man, does McGee fit this description. It doesn’t take much to convince McGee to look into Allen and follow his trail from Florida to New York to Texas and back to Florida. I don’t think there’s a character in this book that isn’t affected by the events as McGee lays them out in first person. One of the more surprising aspects was McGee’s relationship with Lois. When he meets her, she’s almost lost her mind and is in a deep state of terror. Junior Allen thoroughly corrupted her, taking her for all she was worth, and casting her aside like garbage. McGee’s tender and patient actions in this middle part threw me a curveball. It just wasn’t what I expected…and that’s a good thing. It made the listening (excellent narration by Robert Petkoff*) engrossing.

The ending threw me for a loop as well. Not going to detail it here, but if the middle was unexpected, the ending was quite different than I had anticipated.

I really enjoyed this novel. It’s hard-boiled with serious tinges of noir. There is violence in the fight scenes and MacDonald writes them with clear-eyed prose that does nothing to glorify anything. The asides McGee tells us about his views of the world and they are spot on for the time period. This book was published in March 1964, barely half a year after Kennedy was assassinated. Many historians, including myself, see that moment as turning point in history, but author MacDonald clearly had his fingers on the pulse of the country and he already knew America was changing.

*A quick note about the narrator. Robert Petkoff was the second narrator for the Richard Castle novels. I adore those novels and Petkoff really nailed the whimsical vibe of not only “Richard Castle” the author but Nathan Fillion the actor. It took me a little bit to get my head to discard “This is Castle’s voice!” but once I did, Petkoff wholly embodied the sometimes cynical Travis McGee. Petkoff has narrated all 21 McGee novels. This makes me so happy as I’m looking forward to experiencing the cases of Travis McGee with Petkoff as the voice.
Posted by Scott D. Parker at 1:00 AM

Scott, if you like McGee, try my Zack Taylor series, which is direct homage to Travis and MacDonald, although Zack has more problems and isn't as nice. We seeing you at Bouchercon this year?