It Hurts To Ride The Lightning 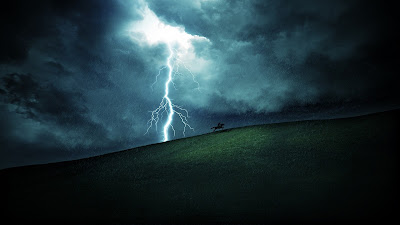 Conference season is upon us once again. The other day, while setting up travel arrangements, I found myself nervous. Despite appearances, I'm rather self-critical, regardless of the circumstances. Little courtroom scenes with me as the defendant, defense counsel, prosecutor, judge, and jury play out all the time in my mind. The other day I unpacked some shit that happened thirty-five years ago just to make certain it wasn't all my fault. There is no statute of limitations for incidents of silent self-embarrassment is what I'm sayin'.

My nervousness was related to the state of things in our commonwealth, how that makes its way into my writing, and what I carry around with me as I discuss things with my friends and counterparts in crime fiction. Many times I've walked away from a conversation just to allow respite for those few authors who hold their breath fearing, with my presence, everything is going to be about race? It makes up at least fifty percent of my graceful exits. None of this stuff has simple answers, so what's the point of dealing with it at all? I have the suspicion folks don't have to deal until I walk over. It may be irrational, but if it wasn't, I understand. Hell, I deal with it on my own. A couple of weeks ago, I almost checked a guy for woke-dropping race references to me without knowing what they mean.

"You never heard of redlining?"

He looks at other members of his crew like, "Yooo, this old MF."

"It's how they created the ghetto."

"So, there weren't literal red lines on a map that proceeded the establishment of property values in certain areas of…know what? Nevermind. Redlining. Got it. Thanks."

I made like Nightcrawler and BAMF'd my ass up outta there. The prospect of engaging in a debate with someone who was standing on a soapbox with only three sides was repulsive to me. I wasn't prepared to teach school to woke types. I took two breaths, left the bartender a bit of a tip, and moseyed. Hey, everyone tosses around terms they don't totally understand. It's how we fatten up casual conversations. That the subject of redlining resonated with my daily experience working on this next novel doesn't mean a thing. I don't have to react as Solemn Keeper of the Black Knowledge. I have no responsibility here. I got shit to do.

The next day, I arrive at a turn in my next novel and I'm really feeling myself in the writing chair. I wrote some lines that flowed so well, they just have to stay in the WIP. Fiyah! I get up, grab a beverage, return and read them again. It's a scathing three-sentence indictment of the black middle class of the mid-1950s. When I say scathing, it's a red-hot, metaphor-free poker up the ass of an entire community that existed twenty-five years before I was born and in times of trouble I doubt I would have survived. A novel ago, I would've left it in. Now, I'm second and third-guessing myself. Is this rational, or shortsighted? Is this an unreasonable take on something that isn't completely related to the progression of my plot? Do I know everything I should understand in order to write with fairness? Is there anyone else who does this to themselves, or am I the only asshole??

The night before, I'm headed back to the crib in the Über thinking just how ridiculous most woke folks sound to me when they harp on about incredibly broad aspects of our societal condition without a shred of nuance. The next day, I'm sitting over my writing thinking, "Delete all that, write 'redlining' and move on," no different than those woke actor types I gave the Irish goodbye.

I guess all this is to say I've begun to feel I'm falling forward into responsibilities I didn't already have, and no one is putting on me. Is that due to my own struggles with the American framework, or is that due to my individual leanings? I'm constantly asking myself am I helping, or imposing? I, too, would enjoy writing a lean 80k words about a retired cop/hitman/sleuth who gets pulled back into the job, type "the end," and rush to social media in self-congratulation. Why do I torture myself with needless depth?

I often remind myself it's really easy to find crime fiction and crime authors who aren't black to read and hang with. I get the odd feeling I don't attract anyone who isn't already interested in what I write about, at least on some level. Otherwise, why would anyone pay attention to me at all? There are far too many books on the TBR pile. David Nemeth says it best: "No One Wants To Read Your Book." Except I want them to want to. I really do. Then that hyperactive 24/7 news cycle is fed once more and events are instantly reported with incredible granularity. "He was what race? And he had what in his hand? And they just shot him? This makes how many in 2018?" I honestly feel as if I'm in a raging sea clutching an old buoy hoping I don't drown. I just don't want all this stuff to matter, but it does, except if it must matter in my life, and I'm writing for mass consumption, where and how and to what degree do I want it to matter for those who read my work? Am I asking for too much? Am I insistent on maintaining a presence in a genre that isn't interested in all that nonsense? Can't I just write a straight story for chrissakes?

I've come up with such pithy ways of explaining it.

"It isn't that my work deals with race and class. Its setting and period are constantly dealing with it."

"Was Raymond Chandler making a point with Philip Marlowe running around Los Angeles during the same period without encountering black folk and black issues at all?"

Cute, right? Now I find myself using them so often, they're feeling worn, and not all soft and comfy-worn, but "You see the holes in those socks?? Throw them out!"-worn. What's going on in America is nasty, messy, greasy shit, and I'm tired of finding pretty ways of putting the point across that helps people feel not so bad about the world we live in. Or maybe not so bad about it they won't want to buy my book. Maybe that's what I'm getting wrong. What if folks just want to open a book and enjoy it and move on? What if my ability to make people stop and think and assess themselves against what I've written isn't a good idea? What if it makes me a jackass?

Last week, I had a really nice time giving a writer for a university newspaper an interview. He asked about my influences for my story in The Obama Inheritance and I was so excited to discuss what science fiction work I pulled from and the difference between a Huxley lens as opposed to an Orwellian, and how if I went Orwellian, the texture of the story would have been totally different. I used the term "tumorous" to describe the current state of American politics. Recognizable as what it once was, but with so many outward growths and pustules, we have to do crazy things to our own minds to ignore how diseased we've allowed it to become. I made some other references I can't remember, but they sounded smart, although afterward, I felt embarrassed for having thought so. He thanked me for my "sage wisdom," which made me somewhat nervous. I hung up the phone. One hour. All about writing. All about politics. Not a word about race.

I returned to my WIP. The current passage was all about race. Tremendously about it. So much about it. I sighed and slumped forward. I remembered all sorts of things I had to do other than writing. I grabbed my PS4 controller, felt like a chump, put it away and got back to work.

Damn, it hurts to ride the lightning.
Posted by Danny Gardner at 1:34 PM

White people have made it impolite to talk about race (just as the rich think it is gauche to talk about money) to the point where they want it to be worse to call someone a racist than for them to be racist.
Fuck that shit. Or in language they'd find polite, bless their hearts....